A celebration for the school’s 25th anniversary 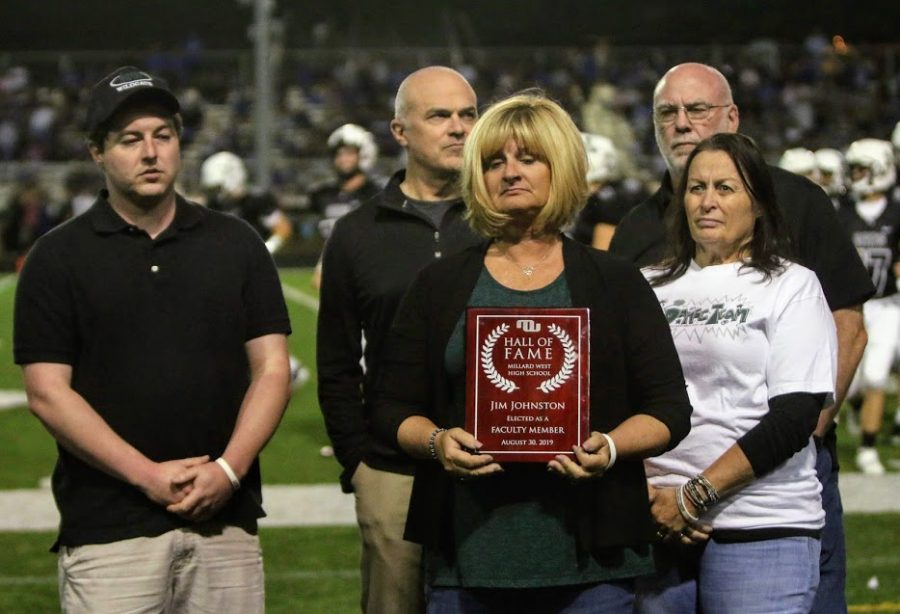 Patty Johnston accepts the Hall of Fame plaque for her husband Jim Johnston who passed away in 2014. She was a part of the special ceremony held at half time of this year’s football game. “This means a lot,” Johnston said. “He is still remembered and people are thankful for what he did for the community and for Millard West.”

As Millard West celebrates its 25th year, the school is finding new ways to honor its tradition of success. During the 2019-2020 school year, the Millard West Hall of Fame has been established to recognize individuals and teams who have contributed above and beyond toward building that tradition.

In order to select inductees for the Hall of Fame, an online form was released with guidelines and instructions for people to submit nominations. The five categories for which a nomination may be made are distinguished alumni, athletics/activities, coach/sponsor, contributor and team. Once nominated, an individual or team will remain in the pool for a period of five years. These nominations are then submitted to a Hall of Fame committee that is made up of current and former administration, parents and members of the district. Once the nominations are gathered and filtered, they are then put on a spreadsheet where the committee discusses who will be selected. Many of the committee members have been in the community for a long time, and they are able to provide valuable insight on the nominees.

If approved during a bond meeting in the spring, a Hall of Fame display will be put in the front entrance of Millard West for all to see as they walk in. This year, 10 nominees have been chosen to be a part of the first ever Millard West Hall of Fame. This includes the 2001 football team, Amanda Stahlnecker, Kim Harris (Ogee), Kyle Bakker, Brett Lindstrom, Chuck McDaniel, Steve Joekel, Dan McLaughlin, Dr. Rick Kolowski and Jim Johnston.

“The Hall of Fame was a good thing to attach onto the 25th,” Millard West athletic director Lance Smith said. “High school students wouldn’t usually get excited about the 25th year anniversary if there wasn’t something to go with it. It’s a good way to celebrate the people who came before.”

Originally, the idea of the Millard West Hall of Fame was started by Chris Loofe, the previous athletic director of Millard West. Millard North had previously added a Hall of Fame to their school about four or five years ago, which is where some of the inspiration for one at Millard West came from. Administration knew they wanted something to attach to the 25th year, so Loofe began working on this concept more seriously about two years prior. The plan went smoothly, as a result an induction ceremony was able to be held at the first football game of the season.

“When I was interviewed at the game, reporters were very impressed that nine of the recipients were willing and able to come back,” Smith said. “We didn’t want to have a big, formal banquet like some places do for a Hall of Fame because you don’t get a lot of excitement. Typically, students don’t come to that kind of thing, and we wanted to have a crowd. We tried it at the first football game to see if that’s what we want to do going forward.”

The Millard West Hall of Fame plans on advertising the nomination process by getting more public exposure from the inductions. As more and more people saw the ceremony over social media, people have gotten more intrigued by the nominations process. Even more marketing will be done through flyers at sporting events and advertisements on the scorevision board. By doing so, the committee hopes to bring in even more nominees each year.