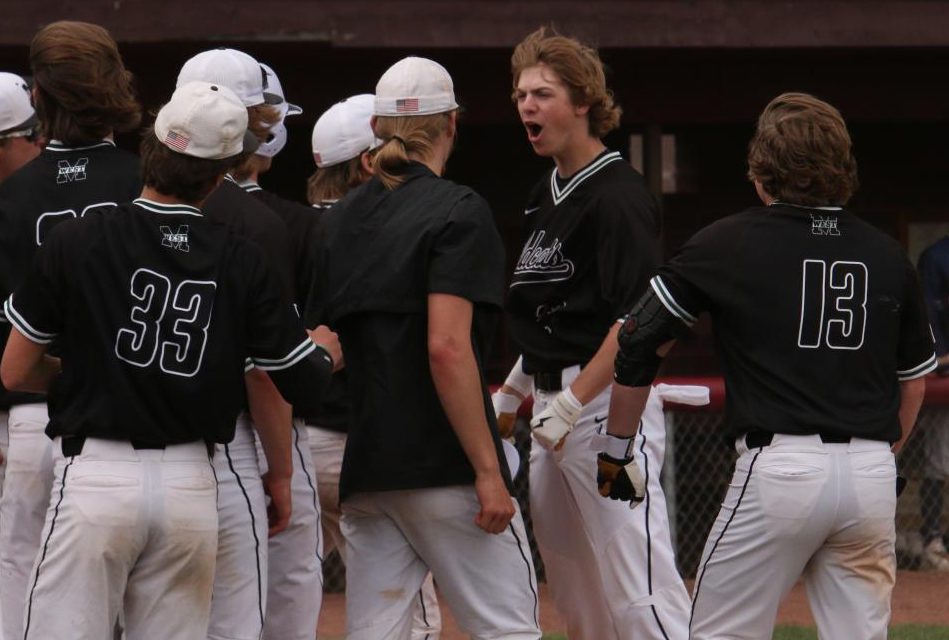 Junior Nixon Snyder celebrates his fifth-inning home run against Elkhorn South. Snyder’s first varsity homerun came in just his seventh varsity game. “I was really just trying to put the barrel on the ball and hit it hard in a gap.” Synder said. “It feels great and it gives me a lot of confidence going into the rest of the season.” (Evan Vaslow)

Junior Nixon Snyder celebrates his fifth-inning home run against Elkhorn South. Snyder’s first varsity homerun came in just his seventh varsity game. “I was really just trying to put the barrel on the ball and hit it hard in a gap.” Synder said. “It feels great and it gives me a lot of confidence going into the rest of the season.”

This weekend, the Millard West baseball team competed in the Monarch Invitational, an eight-team tournament hosted by Papillion-La Vista. The tournament concluded a busy week for the Wildcats, featuring an 8-1 win over Gretna, a 10-1 win over Millard North and three tournament games.

The Wildcats’ first game of the tournament was against the Thunderbolts of Lincoln Pius X. Junior Drew Deremer started on the mound for Millard West. He dominated the Thunderbolt hitters, holding them hitless throughout the first three innings.

Per usual, the Wildcat offense got on the board early, with a two-run first. Both of their runs came without the benefit of a hit: three walks, a hit-by-pitch, an error and a wild pitch. Pius picked up a hitless run of their own in the top of the second, on three walks and a wild pitch.

The game came to a pause in the bottom of the third with a rain delay. The lengthy delay knocked both starting pitchers out of the game, despite neither of them giving up a single hit.

After the delay, Millard West took control of the game. Pius could only muster two more hits the rest of the game, adding one run in the top of the fifth on an RBI single.

Millard West’s offense, on the other hand, came out of the rain delay swinging. They exploded for a five-run fourth, headlined by RBI doubles from sophomore Nick Venteicher and junior Korey Cozad, and an RBI triple from senior Avery Moore. This was Moore’s sixth triple on the season, a state-leading statistic. The Cats added one more insurance run in the sixth on a Cozad sacrifice fly to make the score 8-2, where it would stay for the remainder of the game.

“I felt Avery More had a great week along with Korey Cozad at the plate,” head coach Steve Frey said. “All our pitchers threw well despite the obnoxious winds we had all week.”

With the win, the Wildcats advanced to the semi-finals against Gretna, the second match-up between the teams in four days.

Similarly to the first game, the Wildcats started the scoring in the first inning on an RBI double from Moore.

On the defensive side, senior Jaxson Cahoy kept the Dragons scoreless and hitless throughout the first two innings, striking out all six batters he faced. Gretna was able to string some hits together in the third, striking for three runs and taking a 3-1 lead. The lead didn’t last long, as RBIs from Venteicher and Cozad added two more runs for the Wildcats in the bottom half of the inning, evening the score.

A two-run homerun from senior Drew Borner in the fourth, gave the Wildcats a 5-3 lead. Two batters later, Cozad hit a homerun of his own, adding a run to the Wildcats’ lead.

Cahoy gave up one more run in the fifth on a pair of singles and a sacrifice bunt, making the score 6-4. In the sixth, Cahoy struck out two more Dragon batters, before giving up a double and exiting the game. He ended his night with twelve strikeouts, a season-high. Out of the bullpen, senior Mason Koch struck out four to get the four-out save, sending the Cats to the tournament championship against the Elkhorn South Storm.

“The wind was a big challenge this weekend, especially with the direction it was blowing,” Koch said. “It made my slider, which is my main out pitch, much less sharp and effective, so Korey worked a lot of fake shake fastballs into our sequence which worked very well.”

This was the third meeting between the Wildcats and Storm this year; the first was a 16-0 Wildcat victory, the second was a 6-5 Storm victory in the Metro tournament.

The offenses got started early, with the Storm pushing across one in the first on a double and single. In the bottom half, the Wildcats loaded the bases on a hit-by-pitch, double and walk. A slow ground ball off the bat of senior Dylan Driessen with two outs looked like it was going to end the inning, but Driessen hustled it out for the infield single, scoring senior Rice Whitaker. The scoring didn’t stop there for the Wildcats, as they scored two more on a single from Deremer and another on a wild pitch. The eventful first inning ended with the Wildcats up 4-1.

Elkhorn South picked up two more runs in the third on an error from Driessen, cutting the lead to one run. Millard West answered quickly in the bottom of the inning with two runs of their own. Junior Brady Brau scored on a passed ball, and Moore scored on a sacrifice fly from Deremer.

Senior pitcher Sam Novotny worked around a pair of singles in the top of the fourth, stranding two Storm runners on base. The Cats extended their lead in the bottom on a sacrifice fly from Moore. Later in the inning, Whitaker would score on a wild pitch to make the score 8-3.

Things were looking bleak for the Storm in fifth, down five with two outs. But, two walks from Novotny led to him being pulled from the game. Junior Caleb Lanphear came out of the bullpens for the Cats, and walked two and hit a batter. Lanphear left the game without recording an out and the score 8-6. Junior Brady Tate was able to get the out the Wildcats needed on a lineout to sophomore left-fielder Jackson Williams, sending the game to the bottom of the fifth with the Wildcats lead down to 8-6.

Junior Nixon Snyder, who had been called up from JV just a week earlier, pinch hit for senior Devin Jones to start the bottom half. On a 3-1 count, Snyder laced a ball over the left-field wall to extend the Wildcats’ lead to 9-6.

Tate would get two outs in the top of the sixth before being pulled with a runner on second. Koch came in from the bullpen again, needing one out to get out of the inning. He got the out on a groundout to Driessen but not before a single scored the runner from second. A scoreless sixth from the Wildcats sent the game to the seventh, with Millard West up 9-7.

A leadoff triple gave Elkhorn South hope in the seventh, but Koch got out of the inning unscathed with two flyouts and a strikeout, securing the win for the Cats. This was Koch’s seventh save on the season, a Nebraska high school record.

“While it is nice, breaking the state records isn’t the main focus right now,” Koch said. “I’m just trying to help my team win and they just come along with that.”

The tournament championship was the cherry on top of a very successful week for the Wildcats. Throughout the week, they won five games and outscored their opponents 41-15. Their schedule is busy again this week, as they took on Westside (W 4-1) and Bellevue West (W 4-1), and they’ll compete in yet another tournament this weekend, this time hosted by Millard South.