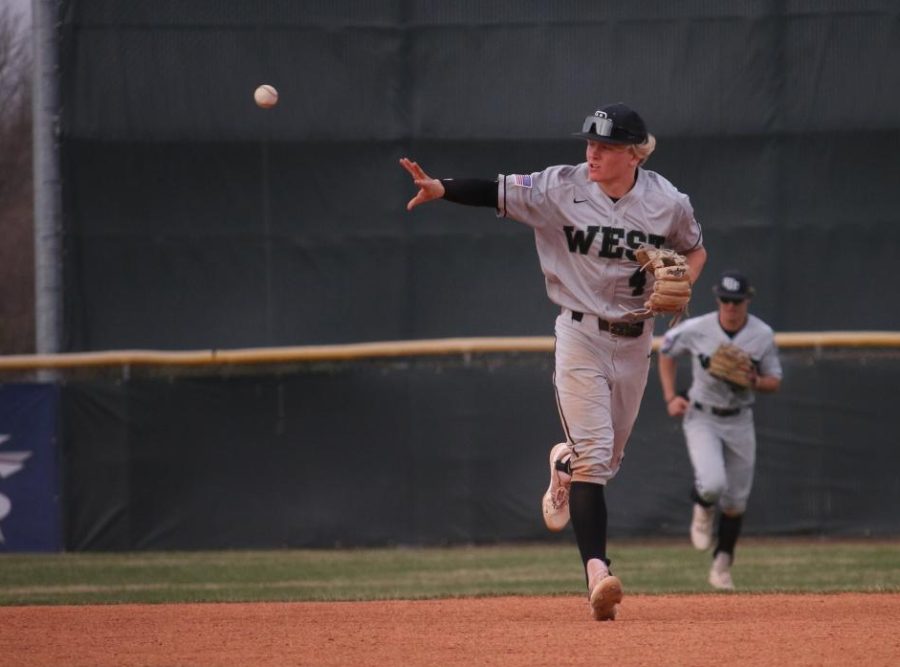 Senior second baseman Drew Borner tosses the ball to the pitchers mound at the end of an inning against the Millard South Patriots. The Patriots won 9-5.

The Millard West Baseball teams spend their spring season honing their skills and working towards state. 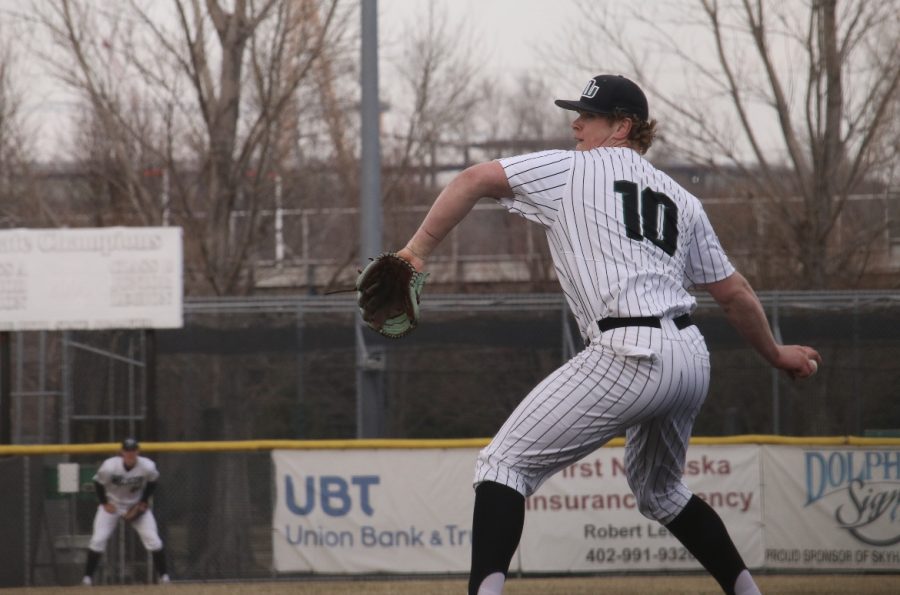 Senior Dylan Driessen delivers a pitch to a Skutt hitter in the game against the SkyHawks. Driessen totaled seven strikeouts over five innings of work while allowing only two runs, both of which were scored off wild pitches. “Each run they earned was caused by a wild pitch,” Driessen said. “So what I can take away from this game is to get into the zone sooner and settle in right away.”

On Tuesday, March 29, the Millard West baseball team traveled to Skutt Catholic High School to take on the SkyHawks.

SkyHawk senior Gavin Brummund started strong on the mound for Skutt, striking out senior Drew Borner. Senior Maddux Fleck gave the Wildcats some life as he hit a single to center; however, two quick outs ended the top of the first.

Senior Dylan Driessen toed the rubber for the Wildcats in his second start of the season. The first two Skutt hitters both worked five pitch walks, putting Driessen in some trouble early. Driessen seemed to settle in as he got a groundout, and two strikeouts ended the inning and kept the SkyHawks off the board.

“I think an important part of that first inning and coming back after those first two batters was getting my fast ball lower in the zone,” Driessen said. “I think keeping them from scoring that inning was due to the two strikeouts keeping the ball out of the field and not letting the runners advance.”

The entirety of the second inning flew by as both sides went three up three down. This sent the game to the top of the third, still scoreless.

The second inning I was able to locate well and that led to a few easy outs back to me on the mound,” Driessen said. “The first pitch of the inning was an off-balance swing at a curveball and that was a big help.”

In the top of the third senior Devin Jones and junior Caleb Lanphear were both quickly retired, which turned the lineup over to Borner, who extended the inning with a single up the middle. A Fleck flyout ended the inning.

Driessen started the bottom of the third strong; on the first pitch of the inning, senior Zach Zmudsinski hit a ground ball right back at Driessen for the first out. The inning became much more difficult though when junior Joe Connolly hit a double to left field with only one out. Just a few pitches later, an infield single by senior Zac Zimmerman scored Connolly and put Zimmerman safely on first.

Driessen seemed to get rattled by the sudden SkyHawk outbreak as he walked the next batter on four consecutive pitches. He was able to rebound nicely though as he got the next batter to ground out to second, moving the runners to second and third, with two outs. This brought senior Drew Haferkamp to the plate with a chance for Skutt to add onto their slim lead. On the second pitch of the at bat, a wild pitch from Driessen scored Zimmerman and moved a runner to third. With an opportunity to drive in more, Haferkamp lined a ball right at Borner at second to end the inning

This brought the Wildcats back to the plate, now playing with a two run deficit. However, the woes continued as the Wildcats went down one, two, three yet again. With all the momentum, the SkyHawks came back to the plate. Senior Mason Kass was hit by the first pitch. Skutt was threatening to have another productive inning. Driessen was able to work around the lead off HBP though as he retired the next three batters in order.

As the Wildcats stepped to the plate in the top of the fifth inning, their opportunities to cut into Skutt’s lead were dwindling. Junior Drew Deremer and sophomore Nick Venteicher were both quickly retired. A two out single by Jones extended the inning, but Lanphear flew out to center, ending another unproductive inning for the Cats. Driessen continued to keep Millard West in the game as he sent the SkyHawks down one, two, three in the bottom half of the inning.

As Millard West came to bat in the top of the sixth, the Wildcats still trailed by two. After a groundout by Borner, and single by Fleck, Millard West had a runner on first with one out and senior Avery Moore coming to the plate. On the second pitch of Moore’s at bat, Fleck tried to put himself into scoring position but was thrown out while trying to steal second. Moore struck out swinging to end the inning.

Junior Brady Tate came on to relieve Driessen in the bottom of the six and started out strong, forcing junior MacCoy Holtam into a popout on the first pitch. A Hafenkamp groundout and a Kass double gave the SkyHawks a runner on second with two outs. This was all the action Tate would see as senior Mason Koch came out to pitch and quickly ended the inning with a strikeout.

As the Wildcats came to bat in the top of the seventh, the objective was simple: score at least two. Junior Korey Cozad started the inning the best way possible as he blasted a homerun over the left field wall to cut the deficit to just one. Two quick outs, however, put the Wildcats on their final out. Venteicher was able to extend the inning with a single up the middle, but a Jones groundout to third ultimately ended the game.

“We got a guy on with 2 outs, but we couldn’t find a way to get him in and tie the game up,” Cozad said. “We need to be tougher when we get down in counts. We also need to hunt fastballs early in counts and hit better when runners are in scoring position.”

The Wildcats dropped this game by a final score of 2-1 and could really never string together the timely hits they needed to put runs on the board. The loss brings their record to 6-2 on the season. Millard West will face off against Omaha Central at home later tonight. 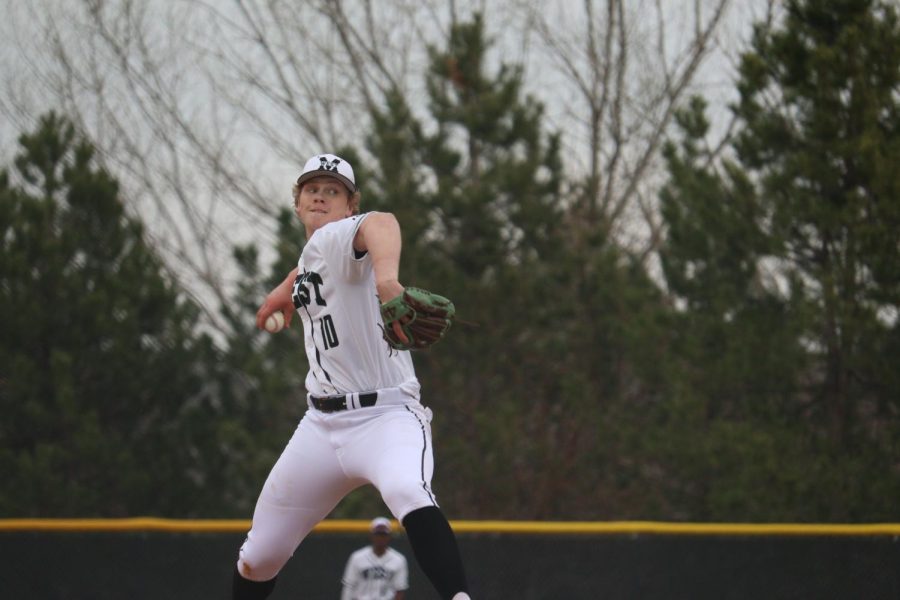 Senior pitcher Dylan Driessen delivers a pitch in the second inning. The Wildcat pitchers combined for 13 strikeouts and didn’t give up any runs. “Our pitchers have not given up a lot of free bases, which is huge for a pitching staff,” head coach Steven Frey said. “Also if we have people on base against us we have been able to pitch out of those situations.”

On a chilly and rainy evening, the Millard West baseball team hosted the Papillion-LaVista Monarchs.

Senior Dylan Driessen started on the bump for the Wildcats. He made quick work of the first two Monarch hitters, setting them both down via strikeout. After a walk and a double, Driessen finished the inning with another strikeout, stranding runners on second and third.

Senior Avery Moore led off the bottom of the first for the Cats with a walk. He advanced to second, on a groundout from senior Maddux Fleck, and to third on a wild pitch. Avery Moore then scored on an error which also allowed senior Drew Borner to reach base safely. Borner later scored on a single from junior Peyton Moore, putting the Wildcats up 2-0. They threatened to score again on another Monarch error, but Peyton Moore was thrown out at the plate to end the inning.

Another strong inning from Driessen, featuring two more strikeouts, brought the Wildcats back up to the plate in the bottom of the second. A one-out single from junior Caleb Lanphear started the Cats offense. Lanphear’s courtesy runner — sophomore Jackson Williams — stole second and advanced to third on a bunt from senior AJ Tauber.

“Bunting has really always been a part of my game,” Tauber said. “I just like to make the infield uncomfortable and make them field the ball. I like to use my speed to my advantage as much as possible and bunting allows me to do so. The main key is placement.”

Williams then scored on a dropped third strike that also allowed Avery Moore to reach. An RBI double from Fleck scored Avery Moore putting the Wildcats up 4-0. The inning ended on a strikeout by Borner, but the damage was done.

In his third and final inning of work, Driessen faced just three batters. A groundout and two strikeouts later, he ended his night with seven strikeouts, two hits and no runs allowed. For the first time, the Wildcats offense was quiet in the third.

Junior Drew Deremer relieved Driessen in the fourth, retiring the first three Papillion batters in order. The Cats couldn’t get anything going in the bottom half, sending the game to the fifth inning, still up 4-0.

Deremer barely made it out of the fifth unscathed. After back-to-back singles to lead off the inning and a sacrifice bunt, the Monarchs had runners on second and third with just one out. A clutch strikeout gave Deremer some breathing room. After an eight pitch battle, he finally plunked senior Nick Chanez, loading the bases. A line drive to right field looked like it was going to put the Monarchs on the board, but senior Devin Jones made a diving catch to end the inning.

The Cats offense woke back up in the bottom of the fifth when Borner reached base on a hit-by-pitch. Borner then stole second and advanced to third on a flyout from senior Rice Whitaker. The Monarchs sophomore pitcher Hunter Jones picked up his second HBP of the inning, nailing Peyton Moore. A wild pitch scored Borner and advanced Peyton Moore to third. He then scored when catcher Zak Reyes overthrew Hunter Jones.

“Base running is pretty key to our offense,” Borner said. “We steal a lot of bases and it creates a lot of offensive opportunities.”

Devin Jones became Hunter Jones’s third HBP victim of the inning, before Hunter Jones collapsed to the ground clutching his throwing arm during the next at-bat. He exited the game, still clutching his shoulder, and was replaced by sophomore Sebastian Noto who struck out Lanphear to end the inning.

Deremer worked around a two-out single in the sixth to keep the score 6-0. Millard West picked up two more insurance runs in the bottom of the sixth when Tauber and Fleck scored on two different passed balls.

The Wildcat’s closer, senior Mason Koch, came in in the seventh and mowed down the first two Monarchs on back-to-back strikeouts. Papillion managed a walk and an infield single before another strikeout from Koch ended the game.

This was the third straight win for the Wildcats, improving their record to 3-0. All three wins have been by large margins, with the 8-0 win against Papillion being the closest.

“We’ve had a lot of fun the last three games,” Borner said. “But, we know the competition is only going to get better so we need to do our best to stay focused and continue to get better while having fun.”

Both their March 22 and March 23 games (against Burke and Bellevue East) were rained out. They will play again on March 25 against Mill Valley and Blue Valley.