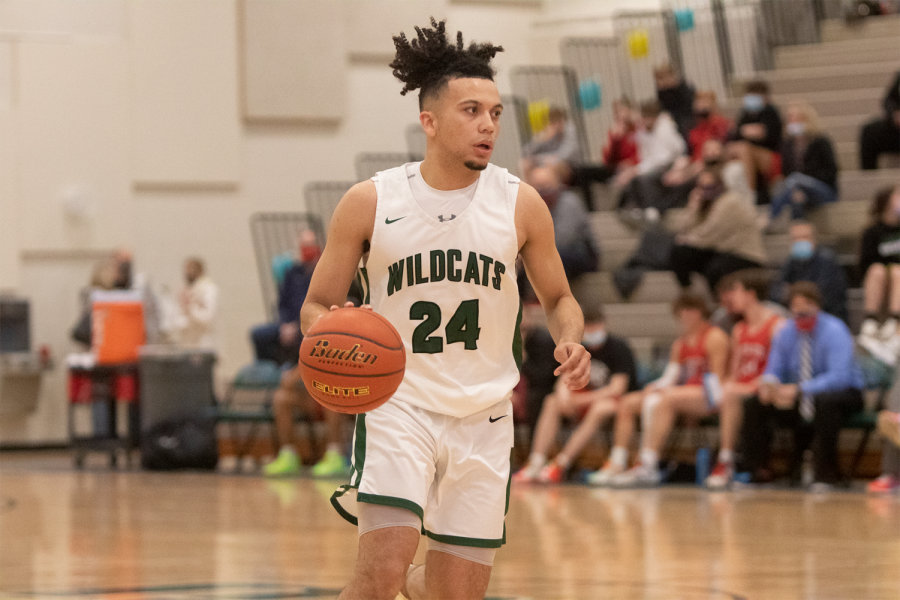 Senior Dominic Humm leads the team to a 10 point victory against Millard South. Humm had 13 points including one three-pointer. “Overall, it was a fun game,” Humm said. “It’s always a good feeling to go out and beat your rival team, especially twice in one year. The game started off a little rocky, but we took control of it in the second half and came out on top.”

On Friday, Jan. 29, the Millard West boys basketball team matched up against bitter rivals Millard South Patriots in which a win would mean adding another win to their four game win streak.

These teams met earlier in the season at the Metro Holiday Tournament where the WIldcats pulled ahead in the fourth quarter to solidify a 10 point victory, 54-44. Going into the game, Millard West’s top scorer was senior forward Evan Meyersick, averaging 14.7 points per game. The team leader for Millard South is senior forward Michael Harding with 10.7 points per game.

Starting off the first quarter, senior power forward Jack Cooper won the tip off against Meyersick. After trading defensive stops, senior forward Dustin Hatch stole the ball away and passed it to senior guard Ryan Larsen on a fast break and scored the lay up with the and one.

After another Wildcat defensive stop, Hatch found senior forward James Conway in the paint for a lay up with the and one which was missed by Conway.

“The mindset the team had was really just to come in and handle business,” senior forward Dominic Humm said. “We all knew it was going to be a good game and that they were going to come ready to play. Millard South always competes. We knew the energy was going to be a bit different, because we had a student section this game. We prepared pretty well for them.”

A missed Harding three pointer led to another Conway layup in the paint. The Patriots were finally able to get points on the board after a layup by sophomore guard Brock Murtaugh and was fouled by senior forward Dominic Humm, but missed the following free throw. On the following South possession, Conway stripped the ball from junior guard Blake Stenger, but led to a Wildcat turnover. Patriots Cooper and Wildcats forward Chase Hultman trade two pointers. The final shot of the first period was a three pointer by Millard South freshman guard Will Cooper, the quarter ended 9-7 Wildcats lead.

The second quarter started off with a Blake Stenger steal against Humm which leads to a Harding layup to tie the game at nine. On the following possession injury on the court as sophomore forward Lance Rucker takes a hard hit from Conway, he would later return to the game. Both teams trade two painters to keep the game tied, but a Blake Stenger foul leads to a shot by Humm, which is knocked down as the Wildcats take the lead once again. After trading defensive blocks, Hultman takes an open three but misses it. Senior Forward Gage Stenger gets his first points of the game to tie the game at 13, and the Patriots defense takes the rebound on a missed three pointer and Rucker puts it in for the Patriots first lead of the game. Meyersick goes one for two on a one and one opportunity to cut the deficit to one point, and the returns on the next possession for a putback layup after a missed Humm three pointer. The Patriots scored two straight buckets to take the halftime lead, 16-19.

“We were playing great defense, 19 points in a half is exactly what we wanted,” Humm said. “We were getting the shots we wanted, they just weren’t falling. Coach just told us to keep shooting our shots and playing our game and that the shots will start to fall. In the second half they did.”

The third quarter was a lot more one sided, starting out hot with a Larsen three pointer, their first of the game. A Larsen foul leads to a two for two from the free throw line for Harding. After a Conway bucket, Rucker takes his second hard fall of the game and is called for a travel. The Wildcats come back with another huge three pointer from Humm to take the lead at 24-21. Blake Stenger goes zero for two at the free throw line, which leads to Humm’s second three pointer of the quarter. The Patriots would score their last two points of the quarter on two Harding free throws. The Wildcats would finish off the quarter with a 9-0 run to lead 35-23 going into the final quarter of play.

The fourth quarter started off with a Harding layup for Millard South’s sixth point since halftime. The Patriots gave themselves another opportunity to cut the deficit by even more after a Cooper block against Meyersick, but Conway created the turnover and led to a Meyersick missed three pointer, and a Conway foul. Cooper then goes two for two from the free throw line to get them within eight points of the Wildcats. After another foul committed by Millard West Blake Stenger goes zero for two from the line to keep the lead at right for Millard West. Meyersick then gets a huge basket along with the and one. A missed Meyersick free throw leads to a great offensive rebound by Hatch who puts it in, adding to their now 12 point lead. The Wildcats show no sign of slowing down with Larsen knocking down yet another three pointer. With a now 15 point lead, the Wildcats were able to maintain a healthy lead and end up winning the game 55-45 and beat Millard South for the second time this year.

“I thought the guys played really well in the 2nd half,” head coach Morrison said “ I think we were a little too amped up in the first half since we were playing South and because of the crowds. Our defense was solid the whole game.”

The boys would go one to beat Lincoln East the next day, Jan. 13, 60-57, extending their win streak to six games.

If you want a picture to show with your comment, go get a gravatar.

The Catalyst • Copyright 2021 • FLEX WordPress Theme by SNO • Log in