Not your average coach

The story behind Hall of Fame inductee 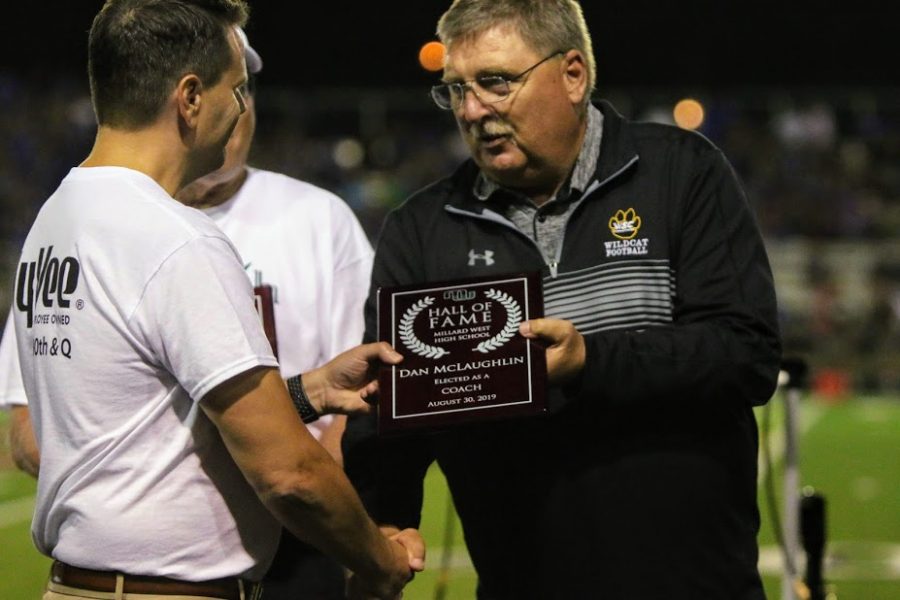 Millard West’s first football coach Dan McLaughlin shakes the hands of many as he receives his Hall of Fame plaque. He was a part of a special ceremony held at halftime of this year’s first football game. “I don’t know if people really understand how special this place is,” McLaughlin said. “When we first played here in 1995, we went 0-9, didn’t win a single game, and none of them were even close. Look where it is now. The crowd, the atmosphere, the new scoreboard and field; it’s a great place.”

Most athletes would agree that in order for any team to be great, they need to have a strong coach who leads them to victory. For the first eight years of Millard West football, that leader was head coach Dan McLaughlin.

In the fall of 1995, McLaughlin came to Omaha with his family to open the new Millard West High School. He had previously led two other high school football teams towards State Championships and had been named Coach of the Year by several different organizations. Unfortunately, the new team did not have a single player who had ever played in a varsity game before, and as a result they went 0-9 in their first season. McLaughlin made some changes the following year that impacted the future of Millard West football.

“We had an outstanding class of freshmen, but we elected to keep them together so that they could experience some success,” McLaughlin said. “I’m a believer that success and failure is contagious, and we didn’t want those kids to experience much failure. Thankfully, they didn’t, going undefeated as a freshman team. Although our varsity team never won any games that season, by the end of the year we were playing our best football, and I was proud of the kids for hanging in there with us and continuing to give their best effort week after week.”

Separating that group of boys their freshman year proved to be a very successful strategy when they played on varsity as seniors in 2001. That year, the Millard West football team won their first ever Class A State Championship. Given how McLaughlin was able to completely transform a group of strong players into a team of winners, many members on the Hall of Fame Committee saw him as an obvious choice.

“I think Dan being chosen as an inductee went beyond his contribution to football,” athletic director Lance Smith said. “According to many of the people who worked for Millard West at the time, he had a lot to do with establishing the overall athletic culture in the building. He taught a lot of other coaches how to win and kind of established a certain attitude among all of our programs.”

Along with this overall influence that McLaughlin has on the school’s athletics, his coaching style is something that made him stand out as well. Current head football coach Kirk Peterson worked alongside McLaughlin as an assistant during his time at Millard West.

“As a coach, he was extremely demanding but fair,” Peterson said. “He was straight forward with his message to the players, there was never any gray area.  You were either doing it right or you were going to do it again and again until you got it right.”

These were some of the many factors that allowed McLaughlin to become inducted into Millard West’s first ever Hall of Fame. After a ceremony with all of the other returning inductees, McLaughlin expressed his gratitude for the recognition that he had been given.

“I feel tremendously honored,” McLaughlin said. “I hold the Millard Public Schools, in general, and Millard West High School, in particular, in such high regard that to be inducted into their Hall of Fame is so gratifying I almost cannot explain it. To be inducted with such incredible staff and student athletes is just a huge honor. My family and I were so blessed to be a part of Millard West High School, and to have the school return the admiration and respect is indescribable.”

This appreciative attitude that McLaughlin has fits right along with the characteristics of his personality that make him a true leader. All in all, McLaughlin has made many contributions to Millard West and he represents the school in a positive way.