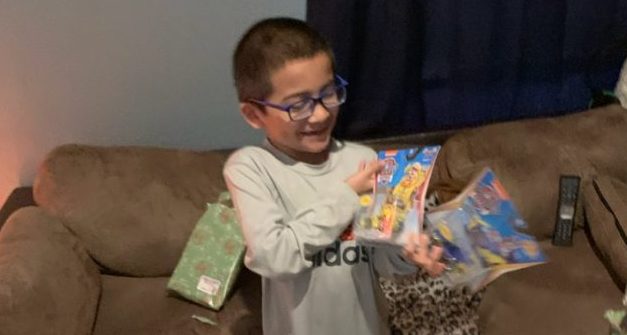 For over 10 years now, Spanish teacher Candida Kraska has been helping out households in the Spanish-speaking community during the holiday season. Through the Salvation Army, Kraska adopts families each year so she can help provide Christmas gifts for the less fortunate. This year, she adopted seven families, with the goal of this project is to be able to create a merry Christmas for the children involved and put a smile on their face by providing them with something they wouldn’t have the chance to receive otherwise.

This opportunity for students from Kraska’s Honors Spanish 4 helped them to see the different types of families who share the same city as them outside of West Omaha. At Millard West, people are surrounded by others who don’t have to worry about if they are going to have gifts under the tree on Christmas morning, however, this shows students that not every kid has the luxury of receiving gifts. Through The Salvation Army, these students are not only able to give back to the community but build character in these young teenagers. Coming together as a class not only brought them closer, but made the children the happiest they’ve been.

“Many individuals out west here really don’t realize the conditions that some people are living in just because they’re just accustomed to what they have,” Kraska said. “This is to show them that there are serious amounts of people in Omaha that are in need. You get to see the eyes and the excitement of the kids that you’re bringing gifts for because they wouldn’t have had anything under the tree if it wasn’t for you.”

With the help of her classes, they gathered to collect gifts and wrap them to give them the full Christmas experience. Her class raised all the money themselves and ended up buying more gifts than they anticipated.

“I think that this makes a very big impact because it really helps out families,” junior Tomm Bigler said. “I mean the parents not necessarily can’t provide for their kids, but they won’t be able to give them all the luxuries that some people will get, so we can give them a little bit of help with that.”

Kraska talked with the coordinator of this program to request Spanish speaking families. They got to contact the family and set an appointment to meet up and all deliver the gifts to see the smiles on their faces.

Everyone in the class was willing to dedicate some time and money for the families involved. The families were extremely grateful and accepted the gifts with a smile when they were delivered. What we may not think as much, is a lot for another household.

“My whole class brought 5 dollars in per student so we could all raise money for the holiday child,” junior Mae Killeen said. “It totaled out to be around $100, which was more than we expected.”

One of the young boys asked for simple gifts such as soccer balls and clothing along with some toys. Juniors Devyn Carmichael, Jayden Kistatis, Gracie Kaster, Eric Wu and Jackson Lagamann were just some of the students who went shopping to purchase the gifts with the money they raised. They were able to spread the money around and purchase many items.

With the holiday season approaching, more families become in need to help provide the best Christmas possible for their children. By connecting with an organization, people can create a huge impact on the lives around you and feel the effects as well. Even though this is Kraska’s last year at Millard West, she will continue to contribute to this program in the following years and help even more families in need.

The Catalyst • Copyright 2022 • FLEX WordPress Theme by SNO • Log in