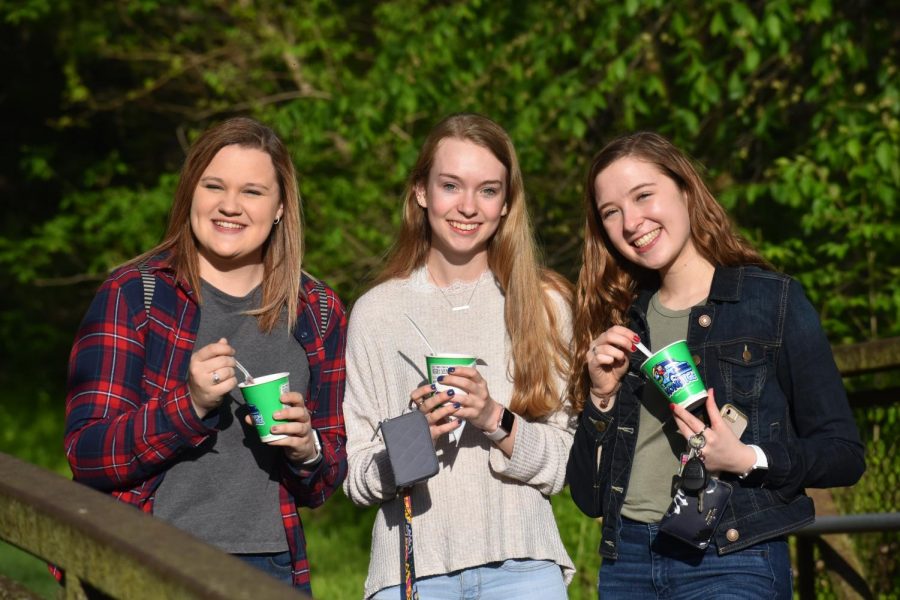 On May 10th, hundreds of grinning faces, young and old, could have been spotted at Zorinsky Lake. The Spring into Summer free park party, a sponsored event by the City of Omaha Parks and Recreations, found hundreds of gathers as the band, Taxi Driver, was presenting.

The event happens annually across Omaha in order to gain a sense of a full community, as neighbors are given the opportunity to socialize and support the local performers. The kick off began at 5:30, lasting until the dark blue sky flew over the crowd, initialling the end of the night. Throughout the hours, participants were provided with an abundance of activities with new events such as the log roll and canoeing. Several Millard West Students found themselves tangled up within this amusement.

“I honestly had no idea what to expect when we arrived at Zorinsky,” junior Mackenzie Guinotte said. “I saw on the ad for the event that there was Kona Ice and I was sold, but once we managed to walk down towards the park area, the whole field was flooded with people. Different bouncy houses, food trucks and outdoor activities surrounded the park. I was surprise with the overall turn out and attractions.”

Guinotte, with her fellow friends, juniors Grace Caniglia and Kaitlin Johnson, found entertainment through several different mediums. Canoes glided through the frigid waves as participants could race fellow groups from the doc to the middle of the lake. This, according to The Omaha World Herald, was a unique aspect as the sponsor had never attempted an activity of this before. Rolling onto the next event, children and parents were encouraged to test their balance on the new log roll obstacle course. Others enjoyed archery, a rockwall that ended in a twisted slippery slide, bean bag tosses, bounce houses, gaga ball, golf and classic music anthems that even drove the elderly out of their seats to dance.

“Canoeing was definitely a challenge, I wasn’t expecting to get soaked with water before the night began, but I then found myself strapped close to my friends in a canoe,” Johnson said. “I thought this was an extremely cool event that I’ve never seen at any of the festivals I’ve been to. I also enjoyed climbing up the rockwall and attempting to shoot arrows. We also terribly failed at hitting golf balls in one of the driving events. None of us even came close.”

One of the expense at the event was food. Cotton candy and other sweet treats could be found in almost every kid’s hand. Greasy food truck items such as BBQ, tacos and anything you could imagine deep fried.

Finally the band Taxi Driver, an Omaha based group since 1991, played classic hits known across the globe such as “Love Shack,” “Rock Around the Clock” and “Fat Bottomed Girls.” Families sat on blankets in front of the stage that flashed blinding lights across the field. The six musicians played and danced for almost three hours until the park party came to a close.

“The performance was a different experience,” Caniglia said. “Knowing that the musicians were from Omaha blew my mind away, as their take on of famous classic rock songs were not only unique, but great to listen and dance to. My friends and I definitely screamed along to the lyrics, while pathetically trying to dance. That doesn’t change how much fun the whole experience was though.”

Even through one of the colder weeks, the day managed to bring mass amounts of sunshine. This overall brightened the mood of the event as it truly felt like summer was right around the corner.