Horror movie ties together the living and the dead 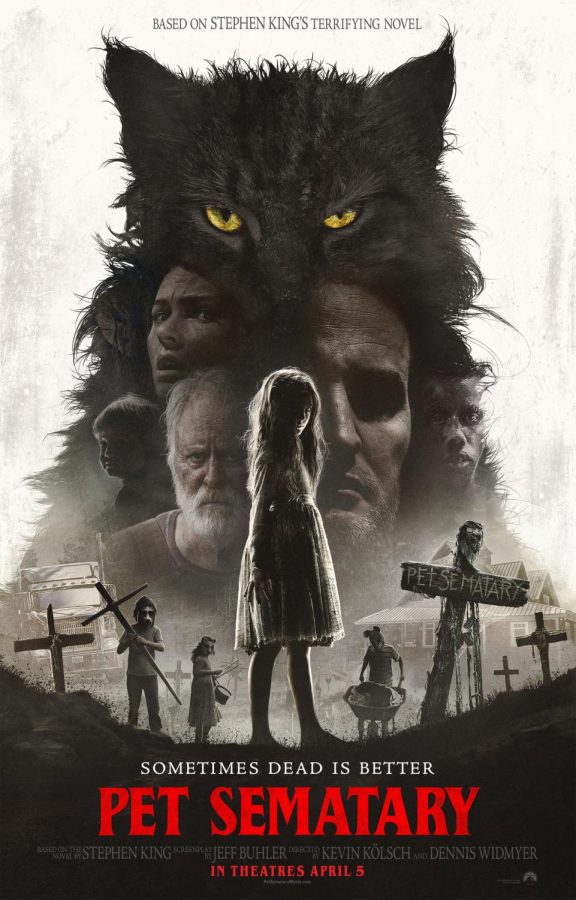 Pet Sematary is an eye-covering, head in shirt and scream-worthy movie. Louis Creed (Jason Clarke), Rachel Creed (Amy Seimetz) and young children Ellie (Jeté Laurence) and Gage (Lucas Lavoie) along with their cat Church move from their hometown of Boston to the small town of Ludlow, Maine.

As the movie starts the audience can see trails and handprints of blood on the ground, and the car doors. Then a flash of white light happens and the audience is brought into the car of the Creed family during their move.

They seem like a normal family that’s wealthy due to the father, Louis, being a doctor. Louis has moved his family to Maine because he wants to “slow down”. He was an ER doctor that had to work the graveyard shift (working from around midnight to around 8:00 a.m.), now he works at the local college hospital and Rachel is a stay at home mom and takes care of the children.

Throughout the movie I was wondering, when do the children go to school? You never see them leave or come back, but you hear about Ellie’s friends from school quite often.

Later when they finish unpacking for the day Ellie runs off into their 50-acre forest and finds the pet sematary, a place where children go to bury their dead pets, and in the back there is a huge wall of sticks. She’s looking around and then decides to climb the wall she then trips and gets stung by a bee. Ellie then meets Jud Crandall (John Lithgow), their older man who happened to be their neighbor, helps Ellie remove the stinger. He then tells her the woods are dangerous and she shouldn’t venture out alone.

Her mother should’ve heard the door opening and closing. It’s not like its a silent brand new door. It’s a creaky old farmhouse door. Rachel should have heard her 8 year old daughter leave. Also, the fact that Jud is just lurking in the background until Ellie falls is kinda creepy.

Later, Louis goes to work. He is annoyed that he’s only gotten bloody noses and some swollen tonsils and wishes more would happen. A few moments later his wish comes true as a student named Victor Pascow (Obssa Ahmed) gets fatally injured by a car.

The special effects makeup is absolutely amazing for Victor. When he is on the hospital bed, half of his brain is exposed and beating with his heart. How they did that is beyond me, but I would love to find out.

Throughout the movie Victor comes back to “haunt” the family. During a dream, Victor talks to Louis about the danger of the woods, warning him he shouldn’t dare go into them ever, all while walking him through the sematary and by the stick wall, but when Louis wakes up his feet, bed and legs are caked with mud implying that his dream was more than just a dream.

Fast forward to Halloween. The family cat, Church, was hit by a truck and killed. Jud is the first one to find Church. He then calls Louis over to tell him what had happened. Jud suggests they should bury Church that night.

The next day, Louis is shocked to see Church alive and in Ellie’s room.

The movie ended with bloody handprints and trails of blood, which is the exact scene in which the movie starts.

That’s the last plot based point I will mention because I don’t want to spoil the ending or reveal anything after that. If you want to know that happens after Church comes alive, you will have to go see the movie yourself.

This movie was based off the book by Stephen King and the 1989 film. Every Stephen King book turned movie is normally horrifying and great; this movie isn’t an exception. It keeps the audience on the edge of their seats not knowing what’s going to happen next.

According to IMDb it’s rated 6.2/10 and according to Rotten Tomatoes it’s a 58%, which I agree with, but to a point. The given scores are questionable and I would like to have seen them a little higher. They rely on jump scares to keep the audience interested. Other than that it’s really not scary. All the CGI and special effects makeup were all amazing, though. They made every situation seem as real as possible.

Pet Sematary is a movie that really isn’t a horror movie but more a suspense movie. I would rate this movie a 6.7/10, a little higher than IMDb but not too high because the majority of the movie isn’t scary, but simply more of a “what’s going to happen next” tale.