Kicking off into a new sport 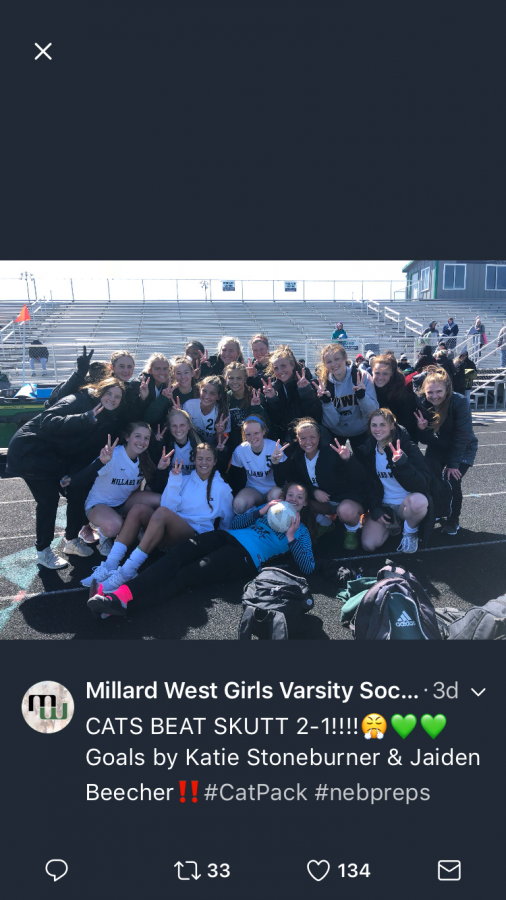 Mud covered cleats tread over the field as the whistle blows, signaling the beginning of the game. Strung back as the last line of defense junior Gabrielle Felker waits patiently between the goal, ready for her time to shine.

After playing basketball since the first grade and making her way up to the Millard West Girl’s Varsity Basketball team, Felker never expected to find herself starting her first girl’s varsity soccer game as goalkeeper.

Felker had started soccer at the age of 4, yet quit in fourth grade due to her passion for basketball. Influenced by her friend, junior Katie Stoneburner, Felker tried out for a team after not touching a soccer ball in over eight years.

“If you would have told me at the beginning of the this year that I would be playing soccer, I would’ve thought you were kidding,” Felker said. “I never pictured myself coming back as basketball has always been my main focus.”

Felker approached coach Jacque Tevis-Butler to ask for the chance to tryout for the team.

“We have always been looking for new goalies, we need more of them in our program,” Tevis-Butler said. “Our returning starter from last year was out for an indefinite period time and we needed depth within that position. I asked my players to ask around and next thing I knew Gabby walked into my room. I warned her that she would have to work for it, and she was willing. I liked her attitude and the fact that she knew she would be constantly competing for her spot with our other goalkeeper Alix Kahler.”

Felker was able to train for the position with other players. Growing up Felker played with juniors Morgan Rhodes and Reagan Raabe. This allowed her to connect with her once again teammates after years of being apart.

“I wasn’t sure how things would turn out since it’s been years since I played,” Felker said. “I am lucky enough to have great players like Katie, Morgan and Reagan who are willing to practice with me by shooting and providing tips to help me relearn the game.”

After spending after hours at practice learning positioning and techniques of a goalkeeper Gabby started to improve at rapid rate. This led to her starting every game so far in this season.

“Gabby has definitely improved,” Stoneburner said. “From the first day of tryouts to the first game day, it’s been incredible. She soaks up all the information like a sponge and applies it everyday in practice.”

Finding support for her decision to tryout was not hard. One of Felker’s biggest supporters who had an everlasting bond with her was her childhood coach, who also was her father.

“My dad pushed me the most,” Felker said. “He has always been a coach for me and made the game mean so much for me. I knew that he would be there for me.”

Soon enough on March 15th, Felker was brought forward to show all that she had learn in her first game.

“I was nervous at first, mostly nervous that I would let down my teammates who have big hopes for this year and our success,” Felker said. “All my fear went away after the game started and I got more comfortable.”

So far in the season the competition hasn’t tested Felker’s abilities, but that doesn’t stop the team from applying the pressure.

“She’s done well and we expected that to be the case, but she hasn’t been tested too much as of yet in games,” Tevis-Butler said. That will come for sure. In practice, she has definitely been tested.  We’ve got some of the best attackers in the state on our team constantly practicing on her. We’re throwing so much at her in practice, but it is paying off as she is getting better and you can see it.”

After trying out, Felker realized how great the decision she made was.

“I learned that whatever plan a person can make for themselves, it can always change,” Felker said. “I’ve seen that I can create new goals for myself and people are there to help support me. I have also met a lot of new people and we have fun playing something different than what I’ve known.”

Felker continues to fight this season to earn the spot she has been given. Taking a chance to tryout for a long lost sport has lead to a new passion as she strives to help lead the Wildcats into success this spring.