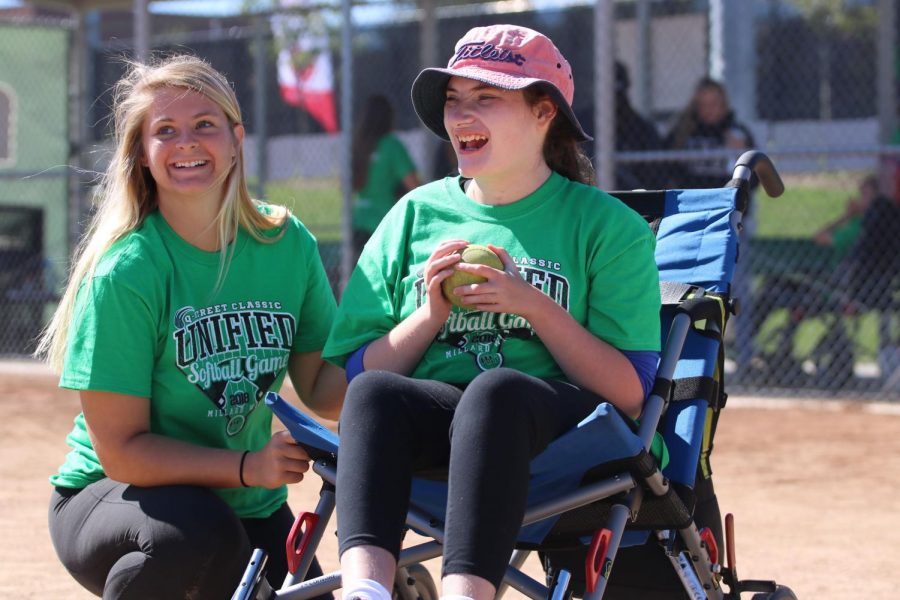 As the second annual Q Street Classic Unified Softball game between Millard South and Millard West begun, excitement ran through the players, coaches and fans. The game is part of the fairly new unified sports program that strives to help students with disabilities get involved in school sports and activities.

As social studies teacher Mike Bowker read off each player’s name the teams gathered on the field and led cheers. Soon after, Dan Masters, the Nebraska School Activities Association’s (NSAA) Assistant Director, took to the mound to throw out the first pitch.

Millard South kicked off the game in the top of the first with two singles and a triple as both teams cheered. The crowd applauded each player as they stepped up to the plate. South drove in a few more runs and headed into the bottom of the first inning leading 8-0. Millard West was ready for their turn at the plate. Junior Ashley Dubas lead the inning off with an infield single. After a few more singles from the following players, Senior Haley Spreitzer put the Wildcats on the board by driving in two runs with an RBI single. Senior Karly Schlecht brought in another run with a hard hit single down the third baseline. With another powerful single from Senior Tess Ray, the Cats earned another run. The inning ended after Senior Hunter Houston hit a high pop fly. The Cats still trailed the Patriots 8-4.

The second inning was full of excitement. The players took the field with a new energy. They waved to fans and danced in between plays. Millard South channeled that energy into their at-bats and hit two back-to-back home runs. With two more RBI triples, the Patriots lead the Wildcats 12-4 after the top of the second. Millard West headed into the bottom of the second fired up and ready to fight back. Freshman Rocco Piccolo started the inning off with an inside the park home run. His teammates drove in two more runs off of RBI singles and the Wildcats left the second inning trailing 12-7.

The Wildcat dugout was full of excitement.

Despite being down three runs, each and every player was on their feet cheering and jumping around. Millard South headed into their last at-bat ready to take the game. They hit two more back-to-back home runs, both inside the fence. After two quick outs, Junior Zachary Jennings hit a triple through a gap in the outfield. He then stole home, giving South a 15-7 lead after the top of the third. The Wildcats were ready to rally in the third inning. Down by eight runs, they started off the inning with a bang. An RBI double from Freshman Will Stoneburner drove in two runs. Then, Senior Kareem Ferguson brought in two more off of his RBI triple. Now only trailing by four, the Wildcats looked to keep the hitting streak going. Freshman Bella Krull cracked a three run triple and then stole home herself. The game ended in a 15-15 tie.

Cheers erupted from the crowd and dugouts. Both teams ran onto the field and shook hands. After the celebrations winded down, each player was given a medal for their hard work and participation during the game.

Both Millard West and Millard South are huge participants in Unified Sports. Events like the softball game help Special Olympics Nebraska reach their goal of making sure that every kid is given the chance to participate in sports and activities without being separate from their peers. Not only are these games fun and entertaining, but they are bringing about change all across Nebraska.