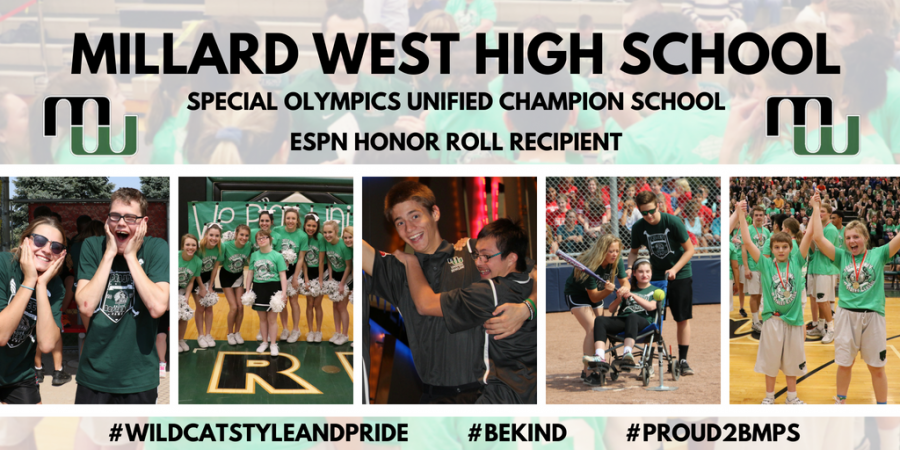 The #BeKind theme has taken Millard West by storm; included in this theme is the idea of inclusion, an idea that the school has diligently been working to ensure. This effort has paid off. On Thursday, Aug. 30, ESPN named 30 schools from across the nation to their Special Olympics Honor Roll; on that list was Millard West.

“There are 131 schools from across the country that are a Unified Champion Banner School,” Special Olympics Nebraska Youth and School Program Manager Sean Whitley said. “Three of those are from the state of Nebraska – Millard West, Millard South and Papillion La-Vista. ESPN had a tough decision to make, but telling from what I’ve seen from Millard West, the hard work and dedication to incorporate a ‘Choose To Include’ into their daily social life is what could’ve set them apart from other schools.”

For the past five years, Millard West has been working to build a Unified program that focuses on inclusive youth leadership, whole school engagement, Unified Sports and sustainability – the four main aspects of the 10 National Standards of Excellence. The staff and students involved were constantly making changes and improvements in order to become a Unified Champion Banner School. Last year the group had submitted their application to Special Olympics Nebraska to become one of these schools. In August 2018, the Wildcats were accepted, little did they know that by the end of the month they would be receiving national recognition for the program they had been working so tirelessly to assemble.

For students like West Friends co-leader, senior Rebekah Hitz, who have been dedicated to this program for multiple years, being recognized as one of the best Unified schools in Nebraska and in the country was nothing short of remarkable.

“When I found out that we were on the Honor Roll, I was ecstatic,” Hitz said. “Last year we had made it our goal to become a banner school, so when we found out at the beginning of this year that we had accomplished that and been named as one of the top schools in the nation I was so shocked and proud.”

High school is a time of self-discovery and growth and no one should feel that they are restricted on what activities they are able to participate in. This idea is what helped shape the Unified Program at Millard West. It was important to make it clear that students with disabilities are just like any other student and deserve to be apart of a sports team or club and enjoy the camaraderie that comes with them.

There are currently five main parts that make up the Wildcat Unified Program: West Friends, Unified bowling, softball, basketball and play production. They aren’t stopping there, however, all the details are being worked out to incorporate Unified Track into the program soon.

Since its initial launch during the 2013-2014 school year, the Millard West Unified program has made vast strides of progress. The program started out as just an after school club, West Friends, and four years later they now offer five different activities throughout the year. Each year the program grows, whether it’s more participation from students or the addition of a new activity into the program. Millard West as a whole school has also embraced the spirit of the Unified Program and has shown tremendous school spirit and support towards every aspect.

“My favorite part about the Unified program is seeing our students interact with their peers and teammates,” special education teacher Danielle Anderson said. “Watching them play in front of the student body is something I will never forget. Also, seeing the student body and the staff here at Millard West get behind our student athletes is something so incredibly special and is exciting to anticipate the growth in the future.”

On Sept. 6, ESPN revealed the top five Special Olympics Unified Champion Schools, from the Top 30 on the Honor Roll, that received a national banner presentation. Although Millard West was not chosen as one of the top five, being part of the Honor Roll is still something the entire school is extremely proud of.

The Wildcats have now shifted their focus to preparing for their annual Unified Softball game against rival Millard South on Sept. 19.