College football is back and better than ever 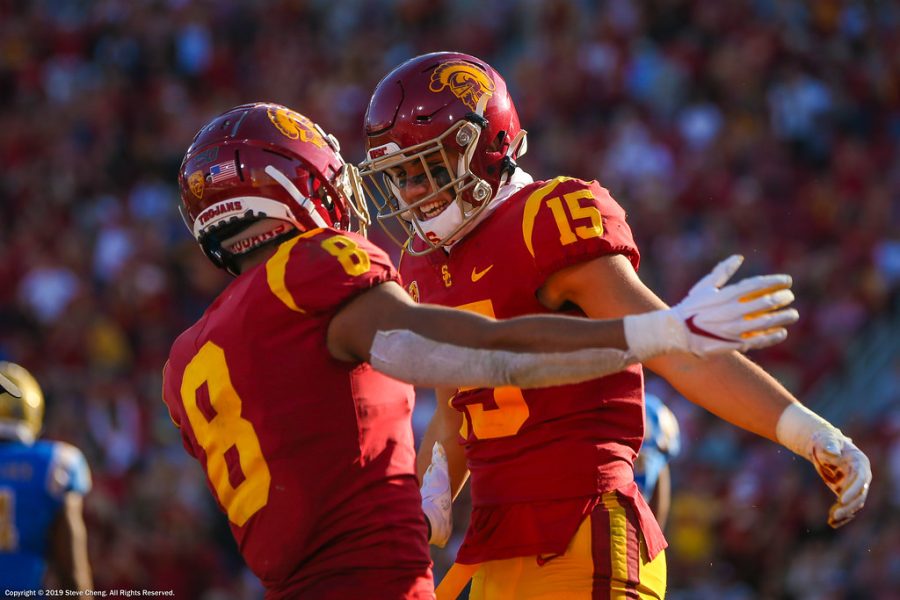 USC dominates Rice in week one to start the season 1-0.

The most exciting time of year is here, the college football season.With there being a couple mid-major games on Saturday, Aug. 27, nothing like the games happening this upcoming weekend on Saturday, Sept. 3.

The most intriguing games this weekend are #23 Cincinnati vs. #19 Arkansas, #11 Oregon vs. #3 Georgia, #7 Utah vs. unranked but deadly Florida, and the best game of the weekend and possibly the year #5 Notre Dame vs. #2 Ohio State Buckeyes. If you are a college football fan you have been waiting for this Saturday since January 10.

College football is thrilled with exciting moments when teams are underdogs, and turn out to be surprising, and have an exciting season. I think the biggest sleeper team that most people think will turn out to have a good season is none other than the Texas Longhorns after a very disappointing 2021 season, and without being ranked to start the 2022 season I think that they will bounce back. They are led by redshirt freshman transfer Quinn Ewers. Ewers was the number ranked player in the class of 2021 and was committed to Ohio State, but after not playing a single snap for them he transferred to Texas for a fresh start. The next key to Texas having a breakout season is starting running back Bijan Robinson in 2021 Robinson had 1,127 rushing yards, 11 touchdowns and 26 receptions for 295 yards. Robinson will play a huge factor for the Longhorns on the ground game and he is certainly going to be in talks for winning the Heisman award.

Now onto the team that a lot of people think will perform the best this year. Most think that Ohio State will perform the best in this year’s college football season. Ohio State went 11-2 in the 2021 season and made it to the Rose Bowl, and they won it 48-45. I think that head coach Ryan Day will have unique game plans to help Ohio State bounce back to another championship. Also in his second year starting quarterback CJ Stroud, he is probably going to lead this Ohio State football team back to another championship. He is one of the front-runners to win the Heisman trophy and if he performs how everyone thinks he will he will most definitely win the award. Every quarterback needs a good wide receiver, and Stroud has that with Jaxson Smith-Njigba, Smith-Njiba had 1,606 receiving yards last year to go along with 95 receptions, and nine touchdown catches. Ohio State has a pretty difficult schedule this year so it’ll be a challenge but they can overcome that and revisit the N C For the first time since 2014.

Sadly, there are teams that do not turn out to be as good as they are, and I am pretty sure that team will be the Oklahoma Sooners this year. There was a lot of controversy surrounding this team last year with the dismissal of head coach Lincoln Riley, and starting quarterback Caleb Williams. When coach Riley left for USC, his decision impacted other players making them transfer from Oklahoma to USC, and that really hurt Oklahoma’s depth. Oklahoma did find a quarterback replacement, Dillion Gabriel, a transfer from UCF, he was a very talented quarterback there but I don’t think that he is really ready to face the good competition in the Big 12. The Sooners have a really tough schedule in the Big 12 and I think that their lack of depth will hurt them, and they will have a down year this year.

Now onto the individual aspect of the game and the best players on the field. First I think the best quarterback in the nation will be CJ Stroud, he is a very dynamic player with a very deep skill set, he threw for 4,435 passing yards in 2021 which was the second most in school history. Now onto the best running back in the nation Deuce Vaughn, who had 1,404 rushing yards, and will definitely surpass those numbers this year, he is a speedy, agile player with a ton of different moves to help the Kansas State wildcats get to another bowl game. The best wide-receiver this year will be no other than Jaxson Smith-Njigba, he had 1,606 receiving yards in 2021 with nine touchdown catches, he is the key to Ohio State’s success this year, and will have a breakout year and be a top pick in the NFL draft. Last but not least, he will probably be the best player in the whole nation this year Will Anderson Jr. outside linebacker for the university of Alabama. Anderson had 57 tackles, 17.5 sacks, and 44 assists in 2021. Be on the lookout for these guys as they plan to have breakout seasons.

Upsets, they happen frequently but not much in college football, or even to the Alabama crimson tide. Unfortunately last year when they played the Texas A&M Aggies, and they lost on a game winning field goal kick, Alabama dreaded that loss the whole year and they have wanted to play the Aggies ever since. That leads me into what I think will be the best game of the year, Alabama vs. Texas A&M play on Oct. 8th, and that day can’t come any sooner. Most people are anticipating a very back and forth close game. This year Texas A&M will repeat and take down the Crimson Tide and I think that will give them a trip to the college football playoff.

Onto the last thing that I will be previewing, is a prediction for the college football playoff. The first team that I think will be making an appearance in the College Football Playoffs is Ohio State, they have a dynamic duo with Stroud, and Smith-Nijgba, and their amazing coach Ryan Day and their coaching staff is one of the best in the nation. The second team is Texas A&M, head coach Jimbo Fisher is an amazing coach and I think that he will have his kids ready for this season, and make an appearance in the CFB, or even the championship. The third team is a very controversial take, but I think the USC Trojans will be making the CFB. They have one of the best qb’s in the nation Caleb Williams to go along with star running back Travis Dye, Dye had 1,271 yards, and 16 td’s in the 2021 season. They also have head coach Lincoln Riley from Oklahoma, and he is one of the best coaches in the nation. Last but not least, I got the Alabama Crimson Tide making the CFB. They have young star Bryce Young at qb, and an amazing defense, and the best coach of all time Nick Saban.

College football season is here and I know I am super pumped. With all the great matchups week one, best team in the nation Ohio State, Most surprising team Texas, Disappointing season with Oklahoma, to the best players in the nation, the best game of the year, and my CFB playoff predictions.