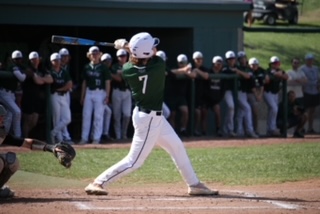 Millard West had a great showing this weekend. Although they came out fast and shut out both teams, they always have ways to improve. “Our team overall can work on feeding off each other’s energy and keep the offense going when there are runners on base,” senior Andrew Tauber said. “I think we all expected to play the way we did Saturday. We all came ready to play and ready to win.”

This past weekend, the Millard West varsity baseball team stayed home to take on two district teams in the District tournament. They faced off against Omaha South, along with Omaha Burke to ultimately come out on top.

The Wildcats came out firing right away in the Omaha South game, as senior Sam Novotny had three strikeouts in the top of the first. This led to Millard West’s first chance at bat for the day, where they kept the momentum on their side. Senior Drew Borner,junior Brady Brau and sophomore Nick Venteicher all were able to score early on. This led into an out, but soon after the Wildcats pushed the gas again, hitting a ball past second to ultimately score senior Avery Moore. This put the score at 4-0 in the bottom of the first, but Millard West wasn’t done yet. They came out of the inning scoring four more to take the game into the top of the second.

“Our team was able to come out so fast and win the games the minute we stepped on the field,” senior Andrew Tauber said. “We were able to do so because we were all ready to play those games and make sure that whoever we played had absolutely no chance of winning.”

The second wasn’t any different for the Wildcats. They were still on full throttle, as Novotny struck out three more batters, not even giving Omaha South a chance. Following this, Millard West slowed down their pace a little, but still managed to score a run before their turn was up. The top of the third was similar to the rest of South’s opportunities, but West had switched out their pitcher. With freshman Brady Ferguson pitching, the play wasn’t much different. He let one batter get a base, but immediately struck out three more to send the Wildcats into the top of the third. After a couple good hits and a hit by pitch, the Wildcats couldn’t find the ball, as South’s pitcher struck three batters out.

Once again Millard West changed out their pitcher, sending junior Caleb Lanphear in. Lanphear was able to stay consistent with the previous pitches as he had one error, but three outs almost immediately followed one another. In the bottom of the fourth, senior Dylan Driessen, junior Brady Tate and senior Devin Jones all managed to get runs for Millard West, sending the score to 12-0. This was followed by three strikeouts by Millard West junior Tanner Wilbeck to close out the game.

“I think we are a much better team than Omaha South,” senior Dylan Driessen said. “We knew that we wanted to use that game to get us ready for the next game and I think we did that.”

The second game against Omaha Burke started just the same. Senior Jaxson Cahoy struck out two batters, followed by an outfield out. In the bottom of the first Millard West had the momentum but didn’t come close to their performance from the last game. Borner, Vemteicher and Moore all were able to get runs, but there weren’t any more opportunities, as Burke got three quick outs. Cahoy was back out in the top of the second, looking to end the Bulldogs inning quickly. He easily got two outs, followed by a second base hit. This didn’t faze Cahoy though, as he immediately struck out the next batter, ending Burke’s turn.

The bottom of the second started with a single and a double that led into two runs scored by juniors Peyton Moore and Drew Deremer. This was followed by another single and a pop out, which gave the Buker pitcher some power. Before ending the inning, the Bulldogs would let up one more Wildcat run, but soon after struck out Wildcat junior Nixon Snyder. Cahoy was still in during the third, as he got three more quick strikeouts to keep the Burke score at zero. This led to three Millard West runs, scored by Dermer Borner and Venteicher, to put the score at 13-0. The next inning was slow for both teams as neither team could get any runs and were quickly stopped by the other outfield. This led into the final inning, as Burke struggled to get on base, giving the Wildcats the district championship win.

“I think personally in those two games I needed to hit pitches in earlier counts instead of getting behind,” Driessen said. “Our team is in a really good spot right now and if we continue to have good situational hitting we will keep winning games.”

Millard West balled out last weekend, scoring 25 runs and giving up zero. The Wildcats will be back to play in the state tournament next Friday, as the number one seed.