Millard West makes it two wins in a row 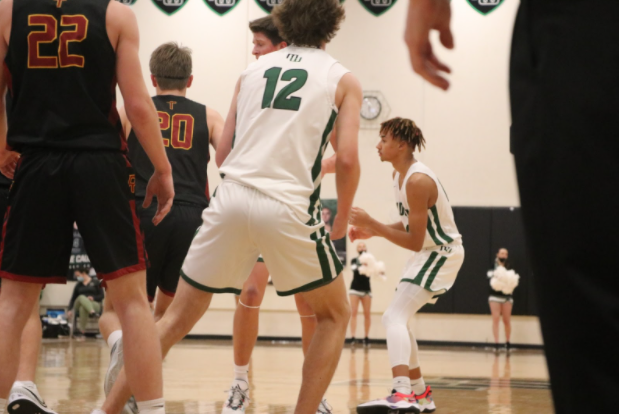 Junior Peyton Moore(12) battles inside the paint as he was the Wildcats leading scorer in the game. Millard West utilized a fast offensive start and a lot of energy to boost them to a win over Roncalli, with a tough game coming up against Bellevue West they will need all the momentum they can get. “We really came out with energy after not playing on Friday,” Moore said. “We are going to try and carry this little bit of momentum we have got right now and have a great week of practice and prepare for Bellevue West.”

Coming off a narrow four point victory over Omaha North, the Millard West varsity basketball team ran into Wildcat I looking to make it two in a row as they took on the second ranked Class B team, Roncalli Catholic.

The game started with Roncalli winning the tip-off and quickly hitting a layup to take a 2-0 lead. A few possessions later, Roncalli added to their lead with another layup, extending it to 4-0. Senior Trace Thaden responded with a layup of his own to trim the gap for the Wildcats. On Millard West’s next possession, sophomore Max Frohloff was fouled and made both free throws to even the game back up at 4-4. Roncalli then responded with a three pointer to take the lead 7-4. The final five minutes of the quarter saw the Wildcats go on an 11-0 run which highlighted lots of great defense as they did not allow Roncalli to score the rest of the quarter. The first quarter ended with the Wildcats on top 15-7.

“Our defense and unselfishness on offense allowed us to pull away heading into the 2nd quarter,” senior Reese Kolar said. “We kept their best player locked up which limited what they could do on offense”

The second quarter began with the ball in the hands of the Wildcats; however, a traveling call gave the ball back to Roncalli. After a Roncalli miss, junior Peyton Moore added to the Millard West advantage, making the score 17-7. Each team was then fouled on their next possession with Roncalli making one free throw and Millard West making two. Two more Roncalli free throws and a layup by junior Jaidyn Gaius-Anyaegbu made the score 21-10. Following a Roncalli timeout, each side had an empty possession before Roncalli drained a three to trim the deficit to 21-13. The final two minutes and 30 seconds of the quarter saw each side scoring five more points and the quarter ended with Millard West on top 26-18. Moore led the team with a total of nine points scored in the first half.

“We played really good team defense in the second quarter and focused on what our game plan was going into the game,” Moore said. “My teammates found me open and us running the court well allowed me to score that many points.”

Roncalli began with the ball to start the third quarter; however, a missed midrange shot that went out of bounds gave the ball back to Millard West. A Roncalli and-1 layup and free throw a few possessions later narrowed the lead again (this time to 26-21). The Wildcats were then able to get three points of their own as junior Cole Kirschner hit a three, giving the Wildcats an eight point lead. Roncalli followed this with a layup, and then a hiatus of scoring on both sides went on for a few possessions.

This was broken by Moore making a free throw and a fast break layup making the score 32-23 Millard West. Roncalli then hit a single free throw and layup of their own to make the score 32-26. The Wildcats then scored back to back layups, the first by senior Avery Moore and the second by sophomore Cooper Fortune. This extended the Wildcats lead to 36-26. A Roncalli layup followed by another layup by Fortune and a Roncalli three pointer made the score 38-31. Another Peyton Moore layup and Kirschner three extended the Wildcats lead to 43-31. Roncalli followed this with a layup to make the score 43-31. The final 30 seconds of the quarter saw no scoring and the game was off to the fourth with Millard West on top.

Millard West started with the ball in the fourth quarter and quickly got on the board. Thaden completed an and-1 and made the free throw, giving the Wildcats a 15 point lead. This was followed by a layup for each team, keeping the Wildcat advantage at 15. Two more free throws by Peyton Moore made the score 50-35. A back and forth scoring outburst by each team quickly made the score 55-40. After a few empty possessions by each side, Gaius-Anyaegbu found Peyton Moore with a full court pass for another layup, extending the Wildcat lead to 17. This was followed by a Roncalli three pointer and timeout with just under three minutes left in the game.

Coming out of the timeout Thaden was fouled and sent to the free throw line where he made two of two free throws. Roncalli was fouled on their next possession and made only one free throw, making the score 59-44. A single Wildcat free throw and the first points of the season by senior Jessie Cauble gave the Wildcats an 18 point advantage. The final two minutes of the game saw Roncalli continuously fouling Millard West, hoping they would miss at the line. However, it was too little too late, and Millard West captured the win 69-54.

“It feels good to have a winning streak but I know it is always in jeopardy so we can’t get comfortable,” Frohloff said. “The main thing to take away is to play with confidence and keep the energy up as a team.”

This win pushes the Wildcats record to 6-5 as the season reaches the midway point. The Wildcats will be back in action this Saturday as they travel to Bellevue West to take on the 12-3 Thunderbirds and hope to continue their winning streak.