Wildcats get caught in the Storm 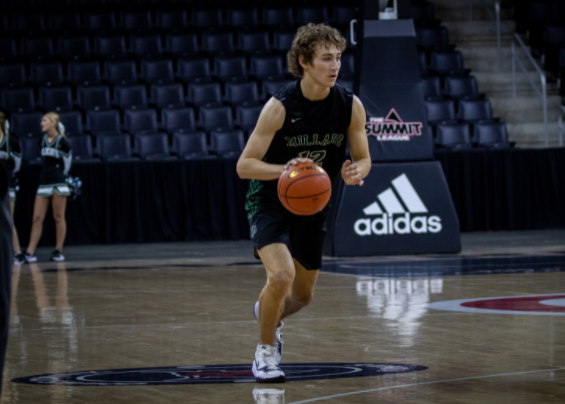 Junior Peyton Moore looks for a path to the basket, he totaled 11 points on two of three shooting from the field, as well as sinking seven free throws. Although the Wildcats offense was able to put up a decent amount of points, a tough third quarter both offensively and defensively hindered the Wildcats chances to come away with a victory. “They came out in the second half with a lot of energy and they used that to their advantage,” Moore said. “We also had some empty offensive possessions in the third and they also took advantage of that.”

Coming off a dominant 57-30 win over the Omaha Northwest Huskies, the Millard West varsity basketball team made the short drive to Elkhorn South to take on the Storm in a district matchup.

The game started with Elkhorn South winning the tipoff. The Wildcats forced a turnover, and a transition layup by sophomore Max Frohloff gave Millard West a quick two-point lead. From then on, both sides stayed even with each other, and midway through the first quarter the Wildcats had a slim 9-7 advantage. However, back to back threes by the Storm gave them a four-point lead. Junior Peyton Moore was then fouled and made both free throws. Following this Elkhorn South made a layup making the score 15-11 Storm. The final minute and 45 seconds of the quarter saw lots of good defense from both sides, and neither team could put up a single point during that time.

The Storm started the second quarter off strong with a layup to extend their lead, but the next five possessions saw neither side being able to score, Millard West forcing Elkhorn South misses and Elkhorn South forcing Wildcat turnovers. The streak was broken when the Storm were fouled and made a free throw a minute and 30 seconds after the previous point was scored. Following this, senior Trace Thaden made a layup to close the deficit to 18-13. Both sides then went scoreless for another five possessions, this time broken by Thaden making two free throws and Elkhorn South draining a three pointer.

After this quick scoring outburst, the defenses began to shine through yet again and created another hiatus of scoring. As the quarter was winding down, Moore completed an and-1 layup, leaving the Wildcats trailing by three. However, Elkhorn South hit a quick three pointer and Millard West could not get another bucket as the clock hit zeros.

“On offense we weren’t getting as many good looks, and we couldn’t get the ball to Trace on the inside,” junior Cole Kirschner said. “We just gave them too many offensive opportunities with shooting the ball beyond the arch.”

The third quarter started with the ball in the hands of the Storm who quickly scored four points coming off of two layups which gave them a 10 point advantage. Each side then hit a three pointer, and the Wildcats got another point off a Moore made free throw, making the score 31-22. The Storm then began to flex the muscle as they went on a seven to two run forcing numerous Wildcat turnovers and misses. With the third quarter coming to a close, junior Cole Butler hit a mid range jump shot which was followed by an Elkhorn South floater as the buzzer sounded, sending the game to the fourth quarter with Millard West trailing 40-26.

“They came out in the second half with a lot of energy and they used that to their advantage,” Moore said. “We also had some empty offensive possessions in the third and they took advantage of that.”

The Wildcats started the fourth quarter with the ball and Moore completed his second and-1 of the game. The Storm scored an and-1 of their own a few possessions later, making the second 43-29. The next five Wildcat points came off of free throws with Moore making two and junior Jaidyn Gaius-Anyaegbu making three. During this span the Storm scored five points of their own, coming off a three pointer and layup, keeping the Wildcats at a 14 point deficit. Kirschner followed this with a layup and three pointer separated by an Elkhorn South layup. The teams then traded fouls, and each side made two free throws, putting the Storm up 52-41. As the final minutes were ticking off the clock, Elkhorn scored one more point coming off of a three throw and the Wildcats could not put up any more points. The final buzzer rang with the Storm up 53-41.

“I feel that we lost focus and while that was happening the other team started to take advantage of that,” Frohloff said. “I don’t think we were aggressive enough with taking the ball to the rim most of the second half which made it difficult for us to be able to stay in the game.”

This loss pushed the Wildcats record down to 4-5; however, the team rebounded nicely and picked up a close victory over Omaha North putting them at 5-5 on the season. The team will play this coming Friday at Papillion La-Vista South as they hope to capture their sixth win of the season.