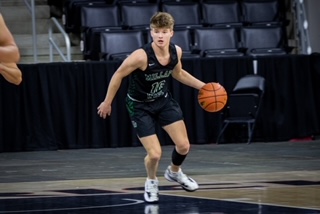 Millard West put in hard work throughout the whole game but after halftime they excelled. They were quick, motivated, and came out ready to play. “The third and fourth quarters we used our coaches' motivation to help us take chances on defense and go to the rim with confidence to help put us ahead,” sophomore Max Froloff said. “The best thing we did well in the game was realizing the opportunity we were missing out on by not playing hard and fixing that in the second half.”

One shot after another, the Wildcat boys basketball team took down the Omaha Northwest varsity squad. With an early lead, Millard West was able to create space in the score, coming out on top Tuesday night.

The game started off with both teams struggling to put up shots. For a solid two and a half minutes, many fouls were called and both teams lost the ball several times resulting in no points being scored. In the third minute of the game, Wildcat junior Peyton Moore got the first points of the night, knocking down a close range shot. Following this, the Wildcats picked up momentum and controlled the ball well, with junior Cole Kirschner stepping up. With several nicely placed passes and good ball movement, Millard West was up 12-2 near the end of the quarter. Although they held strong for a while, the Wildcats let up in the last minute, giving up two baskets to end the quarter 14-7.

“We came into the game knowing that we had to jump on top right away,” Kirschner said. “Just having that mindset is what got us to come out with energy. Overall, we rebounded well, found Trace on the inside on offense and got stops on the defensive end.”

The second quarter began with Omaha Northwest quickly regaining their confidence and taking control of the game. After two minutes, the Huskies were able to put up five points to the Wildcats’ two. Along with this, they stole the ball several times and played press defense to protect the basket. About halfway through this quarter, senior Reese Kolar hit a three point shot and gained back the Wildcats stride. Shortly after this there was two minutes left in the half, and the score was 20-14. Although Millard West was up six, nearing the end of this quarter they were in foul trouble, with nine fouls. This didn’t affect them ending this quarter, but it made the Wildcats more cautious of fouls moving forward.

“We got in foul trouble so we had to be more careful on how we were playing defense,” Moore said. “The team as a whole did really well with staying calm when we weren’t playing well. Also we stuck to how we played and what we did best, not trying to do any fancy plays.”

The third quarter started with the Wildcats up 23-17. Unfortunately for them, the Huskies were able to keep their momentum from the end of the second and come out fast in the third. After a few Wildcat turnovers and Omaha Northwest shots, it was a three-point game. The score was 27-24 with Millard West still ahead. Kirschner answered back to these shots with a three and started an unbeatable Wildcat stride. Millard West started to play team ball again and look for the open man. They were a whole new team. Even when they had open shots beyond the arc, they didn’t shoot and found a man every time in the paint. They were able to take a 10 point lead, ending the quarter 37-27.

“At halftime we revisited our game plan and asked ourselves what we had done out of it,” Moore said. “We really focused on what we were doing and learned from our first half mistakes, so we could play better team defense in the third.”

Like the end of the third quarter, Millard West performed top throughout the fourth. They had swift moves and dot passes which led them to gain a bigger lead. On top of that, the Wildcats played excellent defense, not letting up a single point until 30 seconds left in the game. The game ended with a score of 57-30 with Millard West taking home the win.