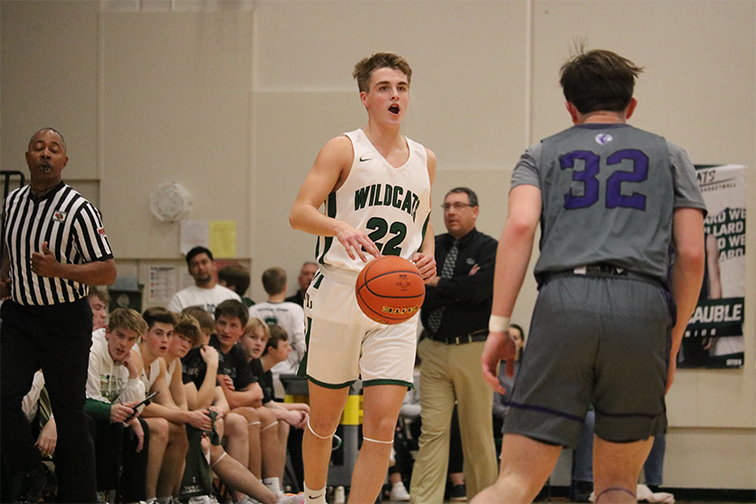 Junior Zac Grandgenett scores four points on Friday night. The previous night, the boys basketball team battled against Bellevue East and won 53-28. “I think the guys knew that the Prep game would be much more difficult, but they were confident,” head coach William Morrison said.” “They may have been a little nervous playing in front of their crowd. We did some good things in the first half but couldn't make any shots.”

The team was coming off a commanding win the night before against Bellevue East 53-28. They were expecting some other guys to step up with senior center Trace Thaden playing a limited role after missing most of the week of practice with illness. The Junior Jays were also coming off a huge win against Omaha Northwest 73-40.

“Our team was confident after playing well against Fremont the week before,” junior forward Jaidyn Gaius-Anyaegbu said. “After a good week of practice, we were able to put away Bellevue East and come back the next morning ready for Creighton Prep, looking to get our third win in a row.”

The first quarter started off with Jays senior forward Luke Jungers winning the tip off against senior Avery Moore to give Creighton Prep the first possession. It wouldn’t last long as a bad pass got stolen away by Moore and slammed it down for the first points of the game. Jungers scored first for his team with an easy layup to get the offense going. Back on offense, sophomore guard Max Frohloff put up a tough shot that sent him to the free throw line for the and one shot but missed it. Prep answered back with a quick lay up of their own off a foul by junior guard Zac Grandgenett. The Junior Jays began their first scoring run of the night on back to back turnovers, then a deep three pointer from senior guard Shawn Ramachandran. Moore got the Wildcats reappeared onto the score sheet with back to back lay ups to cut their deficit to three points. Prep would end the first quarter with a three to make it a 14-8 lead.

Prep started off the second quarter hot with another three from Jungers. Junior forward Jaidyn Gaius-Anyaegbu got a quick bucket before fouling on the next defensive possession which turned into more points for Prep. Prep continued to dominate on both sides of the ball with back to back twos and Jungers with another three which advanced their lead to 12. Thaden got his first points to get the Wildcats within 10, but Prep answered back with a three point play. Another three from junior guard Joey Rieschl added to their lead. Moore scored one more time to end the half and the Wildcats went into halftime down 31-16.

The Wildcats started off the second half strong scoring on back to back possessions as they started to close the gap. Three minutes into the third quarter, Millard West had already scored more points than they had in the second quarter. Prep wouldn’t let them come back without a fight with a Rieschl three pointer widened the gap back to 12. Another lay up and three from Jungers added to the lead to keep their run going. The Wildcats broke the run with a bucket in the paint which drew a foul and completed the three point play. A Junger’s three ended the third with the Wildcats down 47-31.

Only eight minutes remained for the Wildcats to attempt a comeback against the Junior Jays. That Millard West offense got to work with Moore contributing some lay ups and Frohloff knocked down the team’s first three of the night. Both offenses continued to knock down shots keeping a 10 point difference until a Gradngenett three kept their hopes alive. A Jungers foul sent Moore to the line with 2:25 left to play. Moore knocked down both shots to make it 56-50. Prep tried to tick the clock down as much as possible. Once West finally regained possession it had only 1:26 left. Down by four with less than a minute, Frohloff found an open lane but missed the lay up. After a foul, Prep missed both free throws and gave West another opportunity. Moore scored on an offensive rebound with 11 seconds to play. Jungers got fouled and landed both shots to end it for the Wildcats and Prep hung on for the win.

“We grew up a lot in the fourth quarter,” head coach William Morrison said. “The group has no quit in them. That will take us a long way. We get to play Prep again in the first round of the Metro Tournament.”

Moore led with 17 points for the Wildcats and the team looks to get back into the win column on the road against Lincoln High.