Diverse literature needs to be incorporated into English classes 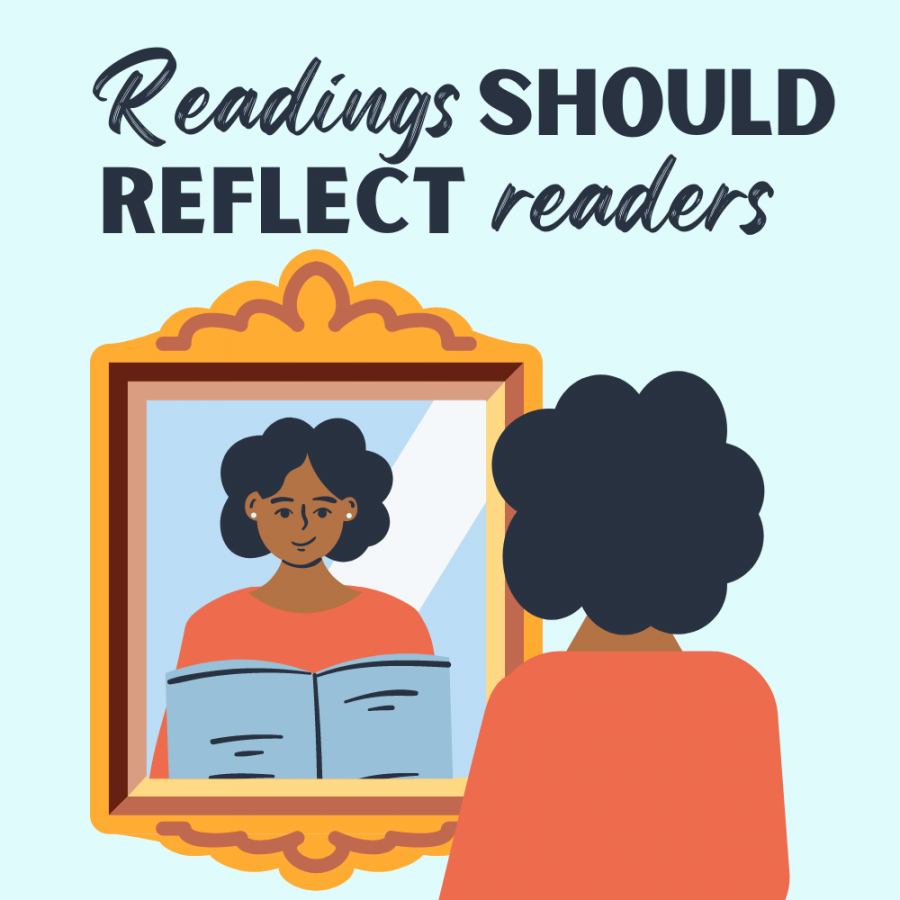 Students need more culturally diverse books in schools in order to represent all students and foster a more accepting future.

“Lord of the Flies,” “The Grapes of Wrath,” “Catcher in the Rye,” “The Great Gatsby” and “The Adventures of Tom Sawyer.” The commonalities between these literary works: white authors, white main characters and white perspectives.

The books that are being taught in English classes tend to stick to a similar format which lacks diversity, and it is negatively affecting young readers. According to the National Institute of Mental Health, the brain continues to develop and contains high levels of plasticity into the mid to late 20s which allows for youth to constantly adapt their views. Inherently, the books being read dictate brain development and leave impressions on students which are confined to the single culture that they encapsulate.

Students who are exposed to a wide array of resources and texts to learn from at a young age have more room for critical thinking and can form their own stances free of prejudice. Implicit racial biases —associations made by individuals on an unconscious level — are strengthened through what students are exposed to. When students only experience one culture throughout their education they default to it. By introducing diverse texts while the brain is still dynamic, students will have a more well rounded perspective and make decisions based on non-race related factors.

In 2020, the National Center for Education Statistics reported that 48.1 million students were enrolled nationwide in grades K-12. Of those 48.1 million students, 26.1 million identified with a racial minority. Although white students still hold the majority (22 million), minorities combined make up a larger population of students and they should be represented within their English curriculum.

Children of color grow up in an educational system where the literature that they consume constantly depicts people that share their skin tones as side characters with minimal worth who are overshadowed by prominent white men. Jim in Mark Twain’s “Adventures of Huckleberry Finn” and Tom Robinson in Harper Lee’s “To Kill a Mockingbird” serve as examples of this racist commonality. Not only does it promote an outdated point of view, but it creates an environment which degrades students of color.

According to Frontiers for Young Minds, students who feel a sense of belonging more frequently foster positive attitudes towards learning and have an increased sense of confidence in their ability to succeed. All students should be provided with texts that they can relate to and be given the same opportunities when they step into the classroom. Racially inclusive literature is a simple switch that has the ability to impact the millions of students who as of right now are not reading books that reflect themselves.

Currently, the “classics” are the books that are frequently worked into course curriculum. Although they provide some historical information, most are fiction based and are used for their literary significance. While educational, they often include racial slurs and tell one-sided stories. Books written by diverse authors, which include diverse characters, can hold the same educational weight while also introducing new viewpoints formed from different cultural upbringings and straying away from offensive language.

Award winning and best selling books like Sandra Cisneros’ “House on Mango Street,” which is a series on vignettes detailing a young latina’s everyday struggles, and Angie Thomas’ “The Hate U Give,” which portrays the reality of police brutality and descrimination for people of color, serve as examples of strong literary works that represent differing cultures.

While one or two of these types of books are sometimes included as supplementary content in Millard Public Schools, students need more. Neighboring school districts, like Omaha Public Schools, have recently invested millions into broadening students’ literary horizons and we require the same steps towards cultural inclusion.

Diverse texts are not a want, but a need for all students in order to promote a cultural inclusivity. Numerous books exist that both benefit students and belong in classrooms; it is simply a matter of putting them there.