The newest bill being put into place within America causing controversy 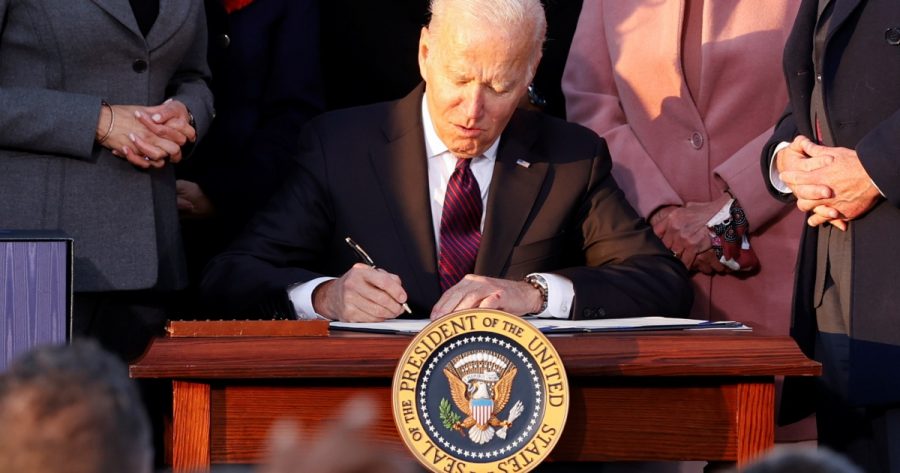 The infrastructure bill being signed into affect by president Joe Biden. This bill is said to be a "community" bill, which will use money which wasn't used during COVID relief. The controversy over this infrastructure bill is large, with communities taking both sides towards it.

All across America, communities and their residents are concerned about the heightening erosion around them. This erosion is affecting houses, roads and commercial buildings. However, what has come out of the complaints, may just worsen more issues within the country.

Early in the morning on Monday, Nov. 15, President Joe Biden signed a $1.3 trillion bipartisan infrastructure bill, as stated by press officials in their conference with USAToday. As the bill goes into effect, there are conversations about how the bill may inflict more damage upon the country when it comes to taxes, debt,  wages and even where the money is going. Whether it may be helpful to the nation is still to be seen.

During Biden’s signing event, he confirmed what exactly is held within the bill. Biden also confirmed how long the bill will last, how he believes it will affect the country, as well as where the money is being taken from and where it will be spent. The five year spending package will spread unspent COVID-19 relief aid and $53 billion in unemployment insurance aid some states have halted through eight different infrastructure regions.

Personally, I disagree with how the bill is using all unspent relief money that could go towards more important items such as homeless shelters, the education system and even state governments. As stated by Prof. Christelle Khalaf in an interview with NPR news, “The immediate impacts are going to be probably felt in the construction industry. There’s going to be a bunch of jobs there. Some reports estimate that it’s going to be 1 million jobs over a five-year time period.”

Sadly, wherever there are positives, negatives also lurk. With the arrival of more open jobs across the nation, there may not be enough qualified personnel to fill the positions. In the long run, this may just set back the progress of advancements within the industry. If construction starts in large cities but has to be delayed or ended, it will only extend the length of time that roads or other key assets to the city will be shut down. An example is the 60th and L road construction here in Omaha, which started in August and isn’t expected to end until the end of November. Thus, this causes a chain reaction that will hurt the local economies, with family-owned businesses and even large companies. Their employees may not be able to get to work, and for companies like Amazon or FedEx, these changes may delay how long it takes shipments to arrive and be delivered. Personally, from experience while living all  across the country, I can say that construction may be good in the long run but is never enjoyable while it happens. I’ve sat through single-lane roads. I’ve had to change where I go for medical and other important meetings or such directly because of a construction project that isn’t truly being worked on as it should be.

For the long-term effect this bill has on the United States, and possibly the world, we won’t know until it happens. However, for now, we can safely say that this is one of the most controversial, yet possibly important and economically helpful bills. This deal can introduce jobs, higher housing incomes and even better living, but it can also introduce negatives such as fewer workers, less money going towards schooling and helping those in need