Missing from the media 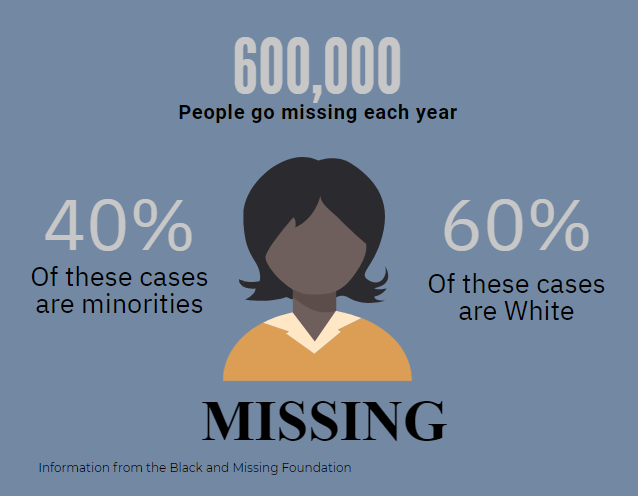 In early September of this year, an aspiring social media influencer, Gabby Petito, was reported missing; weeks later her remains were found near Grand Teton National Park. Petito’s case took the nation by storm; news outlets were following the case constantly giving updates while millions of people were talking about her on social media and following the case very closely. While the media focused on Petito, it ignored thousands of missing people of color.

According to the National Missing and Unidentified Persons System, nearly 600,000 people go missing every year. Minorities make up 40% of that number. A very small amount of these people will receive the media coverage they deserve. A 2016 analyst by criminologist Zach Sommars found that only about 12% of missing person cases involving Black people had any type of media coverage. This is a direct result of the country’s institutionalized racism. The media’s racial bias shows how time and time again minorities in America are treated as they are less than.

Widespread coverage is important for all missing persons cases. Getting someone’s face seen by the masses increases the likelihood of them being identified and returned home. According to Ernie Allan, president of the National Center for Missing and Exploited Children, 125 children have been recovered from postcards sent out to homes with the photos of the missing. Simply increasing the number of people who are aware and have seen the faces of these missing people can help them to be identified. If people of color were given the same amount of attention by the media as their white counterparts it could possibly lead to them being brought home safely.

The struggle to get the appropriate amount of attention for people of color too often falls to the loved ones of these individuals. As reported by the Washington Post, Tiffany Foster, a Black woman from Newnan, Georgia, went missing in March of this year. Her family handed out fliers, spoke at news conferences and held rallies for Foster but her case fell under the radar of the national media and her story did not reach outside of her home state. The difference in coverage is impossible to ignore for the victims’ families.

Families of these victims are left feeling as if their loved ones are seen as undeserving in the media’s eyes.

All missing person cases deserve to receive news coverage no matter race, age or gender, but the sad truth is that the media’s attention for people of color who have gone missing is not equal.