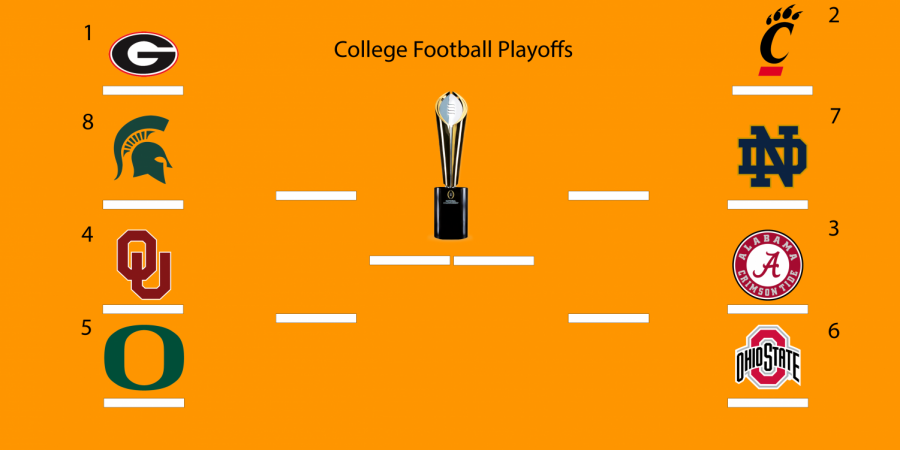 College football playoffs could be a whole new experience with an expansion. It would bring upon more intensity and give teams who deserve it a chance at the title.

As of right now, there are four National Collegiate Athletic Association football teams that make it into the playoffs. The first seed will play the fourth, and the second will take on the third to see who will face off in the National Championship. Although this has been a tradition for a long time, it needs an update.

Expanding the college football playoffs (CFP) would benefit the experience and make it more enjoyable to watch. Usually, there is one team from each of the power five leagues that gets left out because of the four team playoff format. This occurred in 2014, when Baylor and TCU both fought for the fourth spot, and Ohio State blew out Wisconsin to beat them both. This improvement would create less tension within the league and allow a more fair way to determine the real national champion.

Along with dampening the arguments that go along with the CFP, it would also bring more money to the programs. If there was a quarterfinal round, and eight teams were allowed to compete, there would be four more opportunities for packed stadiums and revenue to come in. As stated in an article by Bleach Report, if these games were held at home stadiums instead of neutral locations, they would bring a better experience to the players and fans along with bringing bigger populations to the events.

Furthermore, expanding the CFP would give the Group of Five a better chance at making the playoffs. In the past, many teams like UFC (who went 12-0 in 2017 and 2018) and Western Michigan (who went 13-0 in 2016) didn’t get a chance to play in the playoffs. Even though each team had a better ranking then most of the final four in each season, they weren’t taken seriously. Without an expansion in the playoffs, it terminates any chance the Group of Five conferences have.

Each year it is pretty clear which top two teams will make the playoffs, but the third and fourth spots are anyone’s game. Expanding the playoffs to eight teams would force the fourth and fifth seeds (ranks) to play each other. This would give both teams a chance, along with showing who really would deserve a spot in the second round.

Regardless of expanding the playoffs to however many spots, people are still going to be upset. The number nine and ten spots will still have their usual complaints, like the fourth and fifth do with the regular setup. College football is never going to be able to make everyone happy, unless they put all 128 teams in. Despite this, changing the playoffs to eight spots would allow for more teams who truly deserve a chance to participate. This could include the Group of Five conferences and also give Power Five schools more motivation to fight for a spot.

In the end, changing the playoffs is a difficult and lengthy process. It has been a widespread debate within college football for many years and is starting to get more recognition. As people start complaining more, and it becomes a more known problem, the league should acknowledge this and make a change. Regardless of how many teams or spots they allow, expanding the playoffs will better benefit the fans, the players and the enjoyment of watching college football.