Taking fandom to the next level

Senior gets involved with Omaha professional soccer team through nonprofit 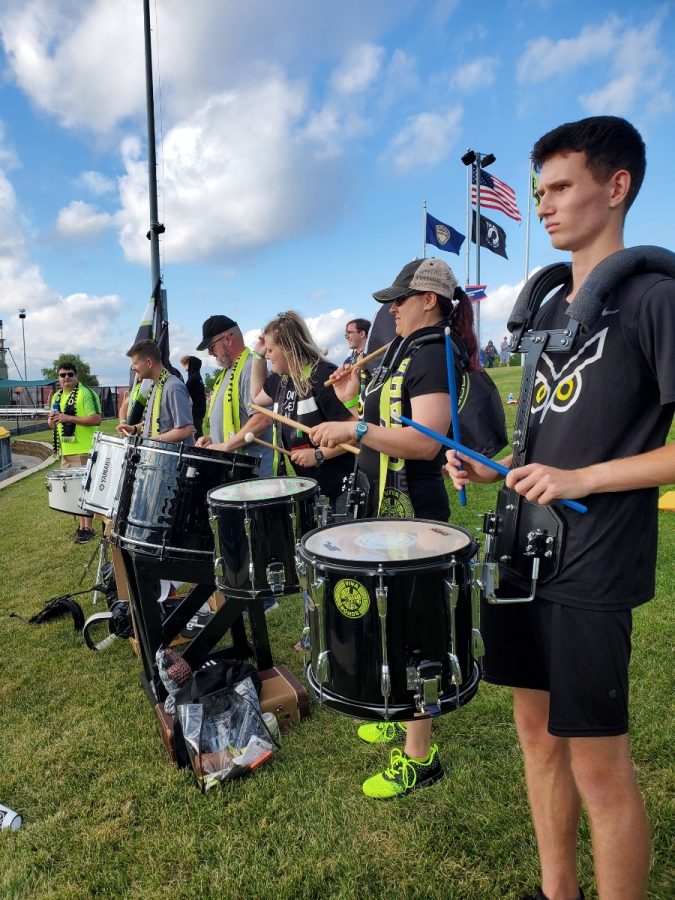 Along with the other members of the drumline, senior Braedon Johnson stands on the sideline to cheer Union Omaha on. Johnson enjoys getting to work with a nonprofit while doing what he loves. “I’m a big soccer fan, so this is right up my alley,” Johnson said. “During the game, we constantly make noise and sing chants while drumming.”

From a very young age, senior Braedon Johnson has always had a love for rock music and soccer. Now, he is taking his love for both a step further when he plays drums at the Union Omaha games.

Johnson got involved with Union Omaha through an organization called Omaha Parliament, a supporters group for Union Omaha soccer fans. The group started in 2019 to promote soccer in the Omaha metro area and support the professional team. Johnson found this group via Twitter, and when he saw that the organization was forming a co-ed soccer team, he didn’t hesitate to get involved.

“I have personally never regretted a single moment of my time spent at games or practicing with the drumline,” Johnson said. “I never felt like I did a bad job or I wasn’t needed, and I’m always pumped and ready to watch the team win.”

On game days, the group sets up tents and grills outside the stadium and socializes before the games. In addition to match days, they have other social events throughout the year, including watching Union Omaha away games and other professional soccer games.

Throughout the season, Johnson and other members of Parliament dedicated their time outside of games to create chants and learn songs that help cheer the team on. Early on, they would rehearse for two hours every other week to make sure they knew the songs and chants well before games. Most of the cheers are created by members of the Parliament or adapted from well-known soccer chants from around the world.

Johnson has done behind the scenes work to fulfill the mission of Omaha Parliament, including helping set up for tailgates, advertising the organization through social media, and designing art for the organization. He designed a tifo, a mini scarf that can be hung on the back of the car.

“Braedon has been an exemplary member, helping in the organization and execution of our group,” Omaha Parliament president Luke Opperman said. “From painting tifos, drumming at games, designing merchandise, setting up and tearing down equipment at tailgates and games. Braedon has a hand in making everything Omaha Parliament does successful.”

Johnson not only is drumming, chanting and doing numerous other things for the organization, but he has also learned soft skills such as time management. Through his involvement with Omaha Parliament, he has gained many mentors and friends that play in professional marching bands; they have helped him become a better drummer and person.

“Braedon has really shown his dedication to the drumline, OP and the team,” mother Chris Johnson said. “I think, in some way, it has made him manage his time better. In order for him to do the things with OP that he loves, he has to make sure his other responsibilities are taken care of. Also, he has met so many people from different areas of Omaha and from around the country – some of these connections will no doubt be lifelong friends.”

Braedon Johnson will share his passion for rock music and soccer by continuing in the drumline and helping with behind the scenes tasks for Omaha Parliament in the future. You can learn more about the Omaha Parliament by visiting their website, omahaparliament.org.