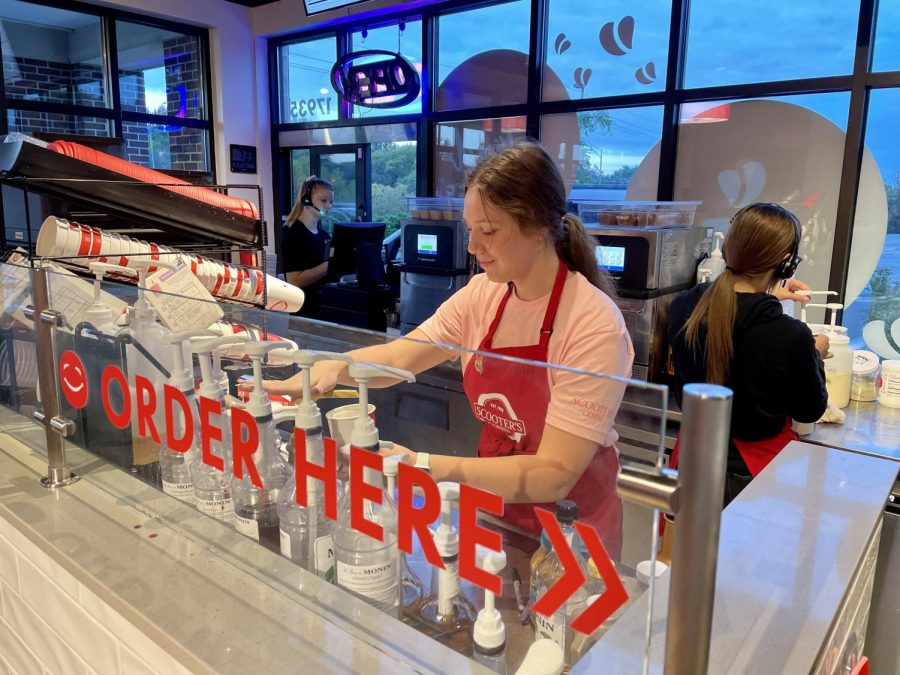 Preparing drinks during their morning rush, senior Kendal Lentz spends her mornings before class working at Scooters. Her time at Scooters has come with many memorable moments which she’s able to laugh about with her coworkers. “The most rewarding part is all the friends I got out of working there,” Lentz said. “All of us, especially the high schoolers, are close and we share lots of fun memories and inside jokes together.”

Grinding beans, pulling shots and steaming milk are all tasks we’re familiar with, whether it be from observing from one side of the counter or from hours spent perfecting the technique on the other. Baristas are heroes that usually come in the form of high school students. With the whirlwind of everyday shifts, having the ability to continuously serve customers with a smile on their faces is a feat within itself.

What is asked of a barista is something not for the faint of heart, many of the situations they are put in fall far outside of their training. But with a bright smile and artificially fueled energy, these workers stampede ahead with a drive to provide the best experience possible. During a time in their young adult lives meant for exploration and learning, these students are getting a feel for what lies beyond the brick walls of Millard West. Many are learning valuable skills that can far exceed their time as a barista.

“I have really strengthened my time management skills, especially since I work mostly closing shifts and have to divide my time between cleaning, restocking and making drinks,” senior Kendal Lentz said. “I think the thing most people don’t appreciate is how quickly we are able to get through rushes in the morning, especially on the weekends we can get upwards of 100 orders in an hour, plus there are usually multiple drinks per order.”

For the general public, it can be easy to write off the work these baristas do, the early mornings and late nights put in to keep the company running smoothly are mainly not seen by their customers. The dedication these employees have not only to their customers but to their jobs provides rewards, both tangible and not.

“The most rewarding part of my job, besides the $15 an hour pay, is the satisfaction of knowing that everyone that passes through feels better after their coffee at 7 a.m. or 9 p.m.,” senior Nolan Nemitz said. “People come through Starbucks because it is a home away from home and our job is to serve coffee and make them feel welcome. We should always make an effort to ask them their name, ask them how their day is, and maybe ask them what their plans are.”

For others, it’s being able to see their work reflected back at them.

“It’s really rewarding to see the store all clean at the end of the night after a hectic day of non-stop action,” senior Ava Konwinski said. “Asides from everything being all sparkly and clean, the tips also make all that work worthwhile. Plus, it’s nice to know that we potentially were able to brighten up someone’s day enough where they felt generous enough to leave a tip.”

Although these baristas reap the rewards of their work the job does not come without its drawbacks. With a majority of their job revolving around the customer, it shouldn’t come as a surprise that they are also responsible for the not so cheerful moments that make up working as a barista.

“One of my least favorite parts of my job would have to be when people come through and are rude to us for no reason,” Lentz said. “Thankfully, it doesn’t really happen a lot, but honestly it’s not that bad because then we have a funny story to share with everyone else which helps strengthen the relationships between co-workers”

While we’re still feeling the effects of the COVID-19 pandemic it’s important to continue to show respect and understanding for your baristas. Many of them were still working while the world around them was put on pause.

“Working during the pandemic was really disorienting,” Konwinski said. “You’re watching every other industry shut down and hearing how we’re going into this kind of isolation yet we still had to go to work every day and try to stay as close to normal as possible. It was nice to know that we could at least brighten up someone’s day even if it was only for a couple of minutes.”

The skills these baristas obtained are sure to be useful after their time serving comes to an end. The unique experiences they’ve worked through will not only stay with them as learning experiences but as stories, they will be able to carry with them through any career.