A creative way to ask for a Homecoming date 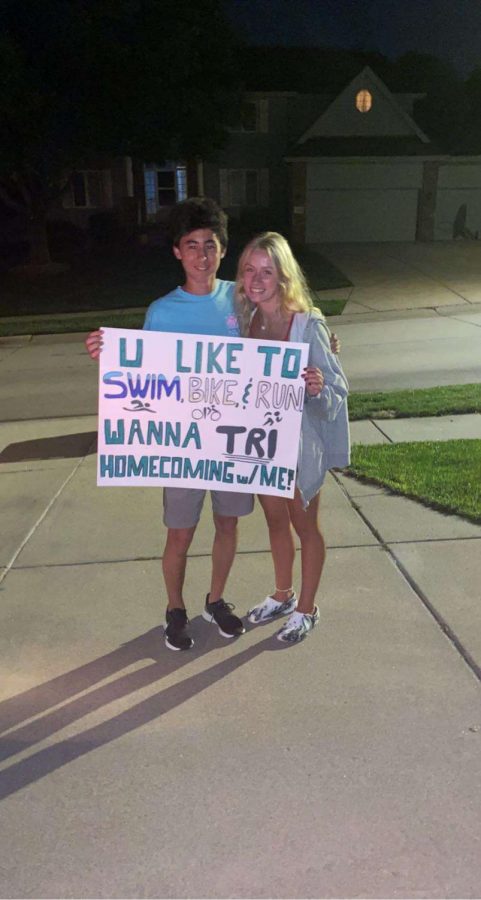 Junior Piercze Marshall asks junior Sammy Ullman to be his date for Homecoming. Ullman replies with the obvious answer, “of course”. “I had to make sure I asked her over a week in advance,” Marshall said. “Now with this time, I can coordinate clothing and everything else with her.”

There are various ways to ask a special someone to be your Homecoming date. You could be lame and use social media to ask for a date, which most people don’t recommend. There is also a creative side to asking for a date: making a poster, which has been very popular recently.

Most signs have some sort of pun, for example: “I couldn’t BEAR to go to Homecoming without you,” with a stuffed bear as a gift. There are endless amounts of clever ideas online that people have copied in the past. There is also an original aspect of asking someone to be your date. Using their interests or hobbies helps show the date that you know and care about them.

Students spend multiple hours on these signs to get them as close to perfection as possible. Since most of these signs are homemade, they are relatively cheap and some of the supplies are already at home.

“I only bought the sign itself but you can buy other stuff that matches the sign,” junior Piercze Marshall said. “I only spent an hour or two on the sign because I wanted to ask her sooner than later.”

The idea of asking for a Homecoming date via sign has bloomed the past few years. It has changed dramatically from when some teachers were in high school. Times have changed for history teacher Chad Young.

“When I was in high school, you just went to their house and asked them,” Young said. “You did not make a sign or give them a gift. The way they are asking now is almost like a wedding proposal and it is a little over the top.”

The dates could get asked at unexpected times. It could be at a sporting event or at the front door of their house. The point of the sign is to surprise the date and hopefully walk out with a positive answer.

Junior Sammy Ullman runs cross country and has even competed in a triathlon. Marshall used this to his advantage when making his sign. His sign reads “U like to swim, bike & run. Wanna TRI Homecoming with me?”

“I did not even expect to get asked by Piercze at some point,” Ullman said. “Overall, it was a very creative sign and I liked it. I was also very surprised when he showed up at my house because I just got home from work.”

Obviously, Ullman replied with a “yes,” so this is just one of the many dates that will be attending homecoming this Saturday. For the rest of the people that don’t have a date, don’t worry it is not the end of the world. A date is not required to have a good time at the dance.