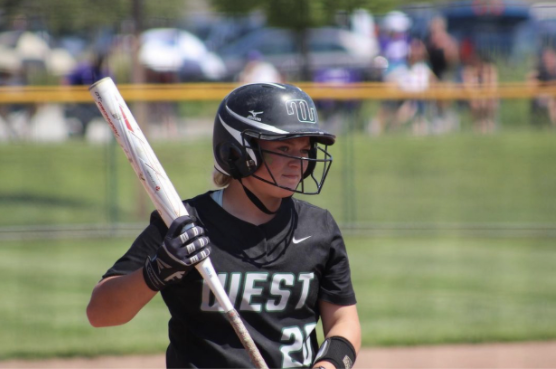 Wyman up to bat ready to advance runners in the second inning. With two people on base she had an important role to fill in advancing runners and putting the ball in play. “What the team did over the season to prepare for our games wasn’t just physical but it was mental,”Wyman said. “Softball isn’t a one person sport, it’s a team sport. So we always say to have the urgency to play hard for your team. We also work really hard as an individual and a team on certain things that we may need to improve.”

Starting off the game, the Wildcats were able to get their bats going with two hits. Senior Emma Van Boskirk was behind the plate and sophomore Jaclyn Johnson was in the circle. Johnson pitched one inning giving up three hits with zero earned runs. Although there were no earned runs, Papio was still able to score four runs on errors while Johnson was pitching.

“My mindset going into the game was to make sure that I spun the ball and avoided the middle of the plate,” Johnson said. “I know that Papio is a hitting team, so I would need to hit my spots to be successful. TheThe defense helped me out when I was pitching because I knew that even if someone got a hit that they would be behind me going all out.”

In the top of the second, Van Boskirk singled on a ground ball to left field. With Vanboskirk on first base, freshman Macie Wyman smacked a line drive to right field advancing Vanboskirk to third. Then sophomore Kailyn Fisher hit a hard ground ball which advanced Vanboskirk home leaving the score 1-0. With seven hits throughout the game, Ava Rongisch and Riley Kramolisch each had multiple hits for the Millard West Wildcats. Rongisch and Kramolisch are both batting top three in the batting order, so they usually have the most at bats. Meaning they are put in many situations where they have to move runners or make important plays.

“This season we are really working hard on being together as a team,” Kramolisch said. “Because last year we were not able to make it to state. So we are making sure to work hard to succeed.”

During the bottom of the second, Papillion La Vista racked up four runs leaving the score 1-4. At the end of the inning, freshman Cailtyn Semple came in for relief, quickly ending the inning. With the Wildcats back up to bat, Rongisch hit a hard ground ball to shortstop, while Wyman hit a sacrifice fly to right field and was able to advance Rongisch home, leaving the score 2-4.