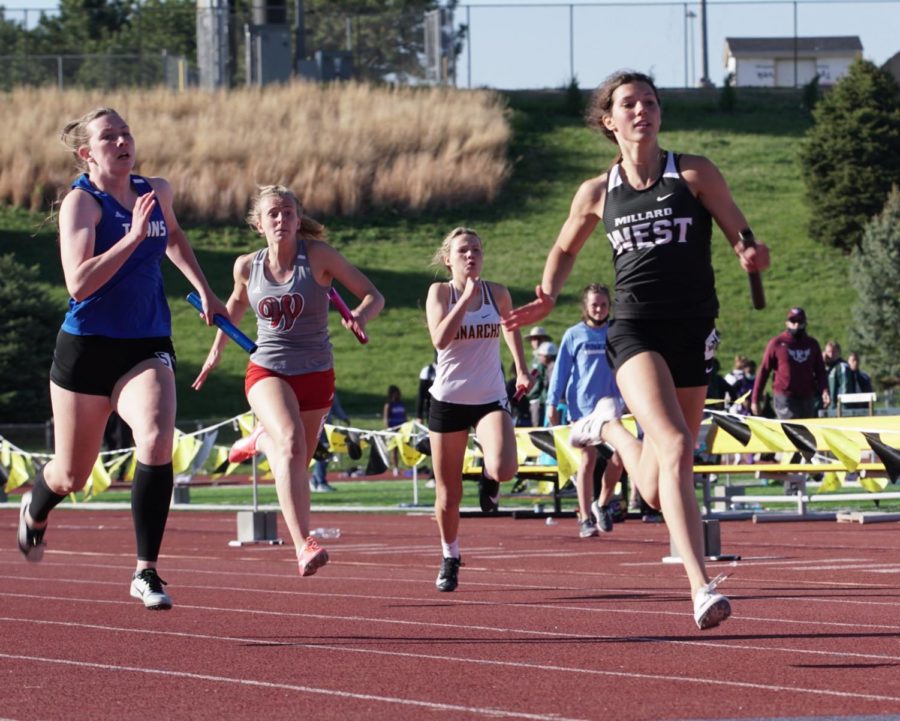 Photo by Mike Sautter of NebPreps

Junior Sadie Millard running in the 4x100 event. The Wildcats took home first place in this event with a time of 49.16 seconds. “Honestly winning metros was such a ‘team’ moment,” Millard said. “We all contributed so much and every point mattered. It was so cool and unbelievable being able to share that victory with my whole team.”

On May 4, the varsity girls track team battled schools around the Omaha area for the annual metros meet. Papillion LaVista South went into the day favored, however, it was the Wildcats who would take home first place.

Many athletes hit new personal bests curating the day’s ultimate success. Millard West had 10 athletes who scored their personal record in certain events throughout the day.

Senior Lindsay Adams, juniors Sadie Millard and Emmy Holl all placed in the top six in the long jump to get West started. Junior Layla Hopkins also placed, this time in the high jump, having a personal record of five feet.

The long jump and the hurdle events were huge for the Wildcats when it came to points. 51 out of the total 111.5 points Millard West earned were in these three events. In the 100 meter hurdles, Adams earned first place with a time of 15.14 seconds and senior Keeley Hourigan getting fifth place with a time of 16.27 seconds. In the 300 hurdles event, Adams and Hourigan finished in the top two, with times both below 49 seconds. Freshman Thea Kutash also helped the Cats out with points, getting in eighth place with a time of 49.41 seconds.

“This year, I’ve really emphasized the importance of having fun to myself and my teammates,” Adams said. “The training program at Millard West also pushes me to produce the best results possible. It is one of the hardest training programs in the state, and because of this, I am mentally and physically challenged on a daily basis, which I believe sets me apart from other competitors.”

The Wildcats were able to earn big points in pretty much every kind of event throughout the day, but these last three events would help them get to the finish line.

Relay racing has been a strong event for the Wildcats all year, as it once again proved to be worthwhile this meet. In the 4×100, Hourigan, Adams, Holl and Millard finished in first place with a time of 49.16 seconds. In the 4×400, Millard joined by Hopkins, seniors Savannah Weitl and Molly Bies ran a time of 4:04.75 which would give the Lady Cats another first place finish. Last for the Wildcats in the 4×800 event, Bies, Weitl, Hartnett and Kutash wrapped up a second place finish with a time of 9:57.02.

“I think my teammates are a big factor,” Millard said. “They continue to push me every day in practice, and I feel like not only am I running for myself but for my team, especially in the relays.”

Millard West finished with a team score of 111.5. The win was big for momentum as the Wildcats now look ahead with the postseason approaching.

“The Metro Conference track and field meet is probably the second hardest meet to win outside of the State Track meet,” head coach Seth Turman said.  “The team ran with a lot of heart and determination, and it was a total team effort to come out victorious.”

Districts will start for the Wildcats May 12 as they travel to Lincoln for the Class A-4 District Tournament.