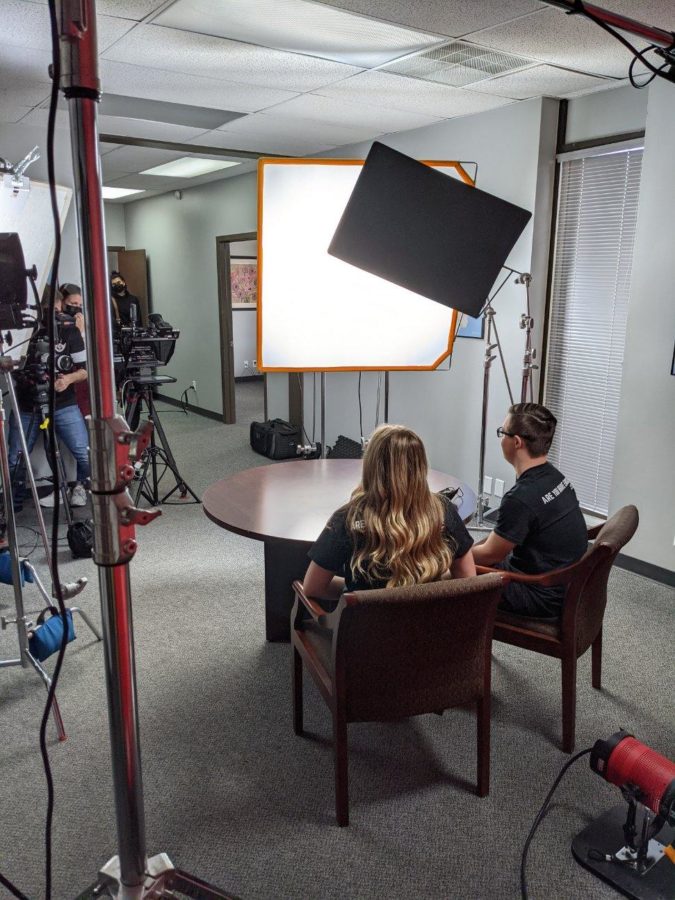 Millard West alumni Joseph Drwal and Sophie Hill prepare to film Unified Talks, a collaboration between Special Olympics Unified Champion Schools and Nickelodeon. The video will be used in Unified Classroom to teach grades K-12 about how to be an inclusive leader. “I hope that the youth who see this recognize that they have the power to spark change and lead within their school or community,” Hill said. “Everyone brings different skills to the table and has the potential to be a great leader. It's their job to step up and advocate for what they believe in.”

Millard West alumni Joey Drwal and Sophie Hill, who graduated in 2021, were given a unique opportunity to spread awareness on a topic they are both passionate about. The alumni are U.S. Youth Ambassadors with Special Olympics and have done a great deal to spread the message of inclusion in their community.

This opportunity, however, was quite different from what they have done in the past. Drwal and Hill were chosen to be a part of the Special Olympics Unified Champion Schools (UCS) Unified Classroom. The content in this classroom is available to teachers as a way to educate students on inclusivity. Special Olympics partnered with Nickelodeon and the National Federation of State High Schools Association to create a video starring Drwal and Hill that discussed being an inclusive leader in a kid-friendly way.

As Youth Ambassadors, both Drwal and Hill work to spread awareness about intellectual disabilities through social media, unified sports and speaking events. In the past, the pair has filmed other videos on topics such as teamwork and unified sports that gave them experience they could use while filming the Unified Talks video. Drwal and Hill, along with UCS, work endlessly to spread the message of inclusion.

“It is so important to spread inclusion because we let our voices be heard and we get to spread the unified message because that is what inclusion is all about,” Drwal said. “By spreading the message of inclusion, people can learn how to be strong youth leaders and take action because small acts are powerful. Taking that first step can be hard, but you have to just go for it.”

The United Talks video focuses on themes that are at the core of Special Olympics, like leadership, inclusion and positivity. The video also features characters from two popular Nickelodeon shows, “The Loud House” and “Spongebob” to keep children engaged while learning about such an important topic.

“Spreading inclusion is important because every person has value and deserves to be treated with respect and kindness,” Hill said. “Too often people believe that individuals with intellectual disabilities are less than or aren’t capable of making friendships. This is so far from the truth. My friends have taught me to be more patient, confident, kind and given me a better outlook on life. I’ve made lifelong friends through Unified Activities and both partners and athletes deserve to form these friendships.”

UCS reached out to Drwal and Hill as U.S. Youth Ambassadors about being in the video in early January. They had about a month of meeting on Zoom to discuss and run through the script. Both Drwal and Hill had to practice the script every day to make sure that they had it memorized by the film day. Drwal also worked with a speech coach to help him be as prepared as possible.

“I’ve been preparing for this my entire life,” Drwal said. “When I practiced my speech, I did such an amazing job. I always believe in myself, and I keep saying to myself ‘I can do this. I got this,’ so that way I don’t get nervous.”

The Unified Talks video was filmed on Feb. 26 and while the pair was unable to travel to California to film due to the pandemic, a small crew came to Nebraska to film the video. A larger crew Zoomed in throughout the filming day to make sure everything ran smoothly. The crew set up two cameras, proper lighting and everything else needed for the set, then it was time to film.

The process of filming was about four hours long and took a lot of focus from both Drwal and Hill and the crew. The pair had to do a few run-throughs of the entire script then filmed each part line by line to ensure a flawless end product. But it wasn’t all serious, the video included many jokes and games, including one where they both had to guess how many times “leader” was said and then the winner would be covered in the iconic Nickelodeon slime.

Unified Talks starring Drwal and Hill will be used in classrooms across the country to educate children about intellectual disabilities and why it is so important to lead with an inclusive mindset. The alumni will continue to work hard to spread the message that means so much to them and to start a new generation of inclusive leaders.