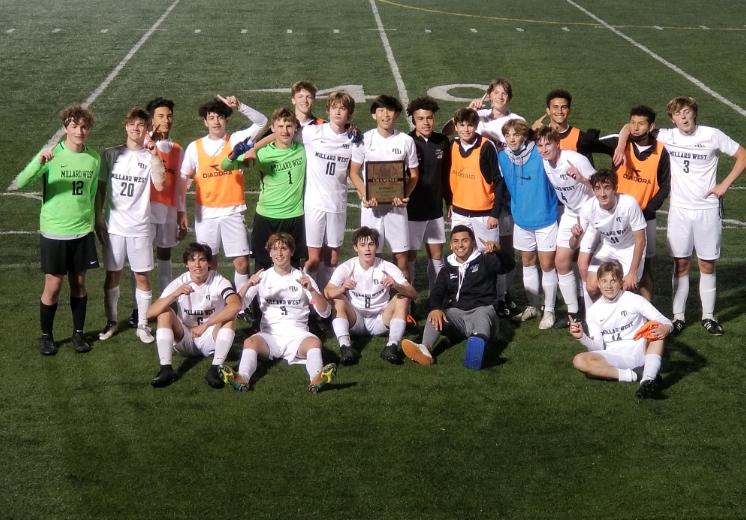 The Wildcats pose for a picture and celebrate their District Championship after the game. This advances the team to state and they enter in an underdog role but still have an opportunity to take home the title. “At State, anything can happen. Sometimes you go as the underdog and end up winning big,” Aguirre said. “We have to go one step at a time with faith and confidence and try our best, if you do that there will be nothing to regret.”

The Millard West Varsity Soccer team battled the Lincoln East Spartans in the A-6 District Final Game on Wednesday, May 5. The Wildcats came into this game riding high after a goal with 12 seconds left advanced them to this finals matchup. The Spartans entered this game off of a victory over North Platte and came into this game as the higher seed.

The first half of the game was a tale of physicality. The possession of the ball exchanged hands very rapidly and both teams were moving up and down very quickly. Despite all the pressure each team was putting on each other, both sides were having a hard time finding the goal. Both teams put various shots on goal however, many of them missed wide and the game was 0-0 most of the first half. Millard West junior goalkeeper Cody Fuller made a save with 9:50 to go in the first half to keep the game at 0-0 as time was winding down. This all changed however when the Wildcats were able to find the goal, a header by junior Johnson Lu was assisted off of a left side kick by sophomore Reegan Hawkins.

“We started out with high pressure and kept it up throughout the first half,” Lu said. “We were close to scoring multiple times and we knew eventually it was gonna come to us.”

“The message was to continue to dominate them and don’t let them come back and try to tie the game,” head coach Juan Agurrie said. “We made a couple of adjustments and we continued to defend our goal but also we tried to keep playing our passing game.”

The Wildcats began the second half of the game with the ball, however the second half was more of the same play we saw from the first half. The ball changed hands often and both sides were taking it deep into opponent territory. The Spartans were finally able to find the scoreboard after Fuller made a save which was rebounded by sophomore Aiden Nachi who kicked it in for Lincoln East’s first goal of the game. This made the score 2-1, and with over 36 minutes left in the second half anything could happen.

The next 15 minutes of play consisted of very intense back and forth play, there was a lot of physicality, but there were hardly any shots on goal and the ball stayed around the middle of the field. From the 20 minute mark on, however, each team put a ton of pressure on the goal and had some very near misses. The ball moved back and forth, up and down the field very rapidly, with the Wildcats trying to play keep away and the pressure of the clock weighing on the Spartans. With only three minutes left in the game Lincoln East had a great shot on goal with Fuller out of position, but the shot was missed and the game remained 2-1. This miss did not count the Spartans out but it did add to the desperation and with just mere minutes left Lincoln East could feel the pressure. The Wildcats held strong and a few clears iced the game and Millard West came out on top 2-1.

“At the beginning of the second half I think we were a little too comfortable and once they scored it was a little stressful,” Lu said. “We changed our tactics near the end and came out with the win which was so rewarding.”