This film needs to dig a little deeper

Though artfully told, Netflix’s “The Dig” left more to be desired 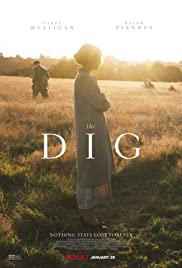 The Netflix film “The Dig” captures the grit of an excavation, the romance and drama of young love and the beauty in once-in-a-lifetime moments, but there is still criticism to be made of the supposed “accurate portrayal” of the real Sutton Hoo dig.

For most of us, the years of digging in sandboxes are over, but the idea of unearthing precious treasure still sparks curiosity no matter one’s age; thus, imagine my intrigue to see the title “The Dig,” a film based on the real Sutton Hoo excavation, pop up on my Netflix recommendations.

For the Americans, like me, who are not up to speed with their British history, the excavation took place in Suffolk, England, during the late 1930s and 40s. The name “Sutton Hoo” derives itself from Old English and means something close to “the hills of the Southern farmstead” which makes sense upon seeing the gigantic Earth-mounds archaeologists combed through in both real life and the film.

The cinematic story begins when the recently widowed and ailing Edith Pretty (Carey Mulligan) looks to uncover what lies beneath the mounds of her estate. While greedy museum officials pressure Pretty to let them in on the dig, she stays firm in her desire to hire self-taught, amateur excavator Basil Brown (Ralph Fiennes).

After little success on Mound One, Brown moves to the next — the oddest and most oblong mound — where he finds a burial ship deep beneath the dirt. Brown, along with his small misfit group of men, works tirelessly each and every day, rain or shine. That is until word gets around of Brown’s exciting excavation, attracting the Ipswich Museum and the British Museum. The British Museum then takes jurisdiction of the dig, bringing along archaeologists Charles Phillips (Ken Stott), Stuart Piggot (Ben Chaplin), Peggy Piggot (Stuart’s wife played by Lily James) and others.

Brown senses the distaste Phillips has towards his “lesser” experience and fears that he will never receive any credit for his work, thus leaving the Pretty estate without so much as “goodbye.” However, after persistent pleas for return by Pretty’s young son Robert, Brown comes back to the dig site; soon enough, Anglo-Saxon artifacts, like ancient gold coins, start cropping up. The tension of both the rival museums and Pretty continues to develop while subplots also have their time to shine.

I took immense interest in learning about Peggy and Stuart’s complex relationship. From the moment they’re introduced, their love seems completely flat. As the movie progresses, the viewer (and Peggy) see the way Stuart completely lights up around one of his male colleagues. Understanding that Stuart is closeted, Peggy lets him go and jumps into a whirlwind romance with Rory Lomax (Johnny Flynn). Lomax, a cousin of Pretty’s, was there to lend a helping hand and take photographs of the dig before he got shipped off into the Air Force. Therefore, this young, time-crunched relationship really tugs at the heartstrings. Yet, in the end, I felt satisfaction knowing that Peggy and Stuart gained the freedom to be themselves to those they cared most about.

I also thoroughly enjoyed Robert’s role in the film. He displayed the childlike wonder in us all; from his aluminum foil space helmet and hand-decorated cape to his enduring relationship with Brown and his heartwarming tribute to his dying mother, Robert remained a character to root for and cherish throughout the movie.

And while the characters shined, the cinematography shimmered just as much. The warmth of the coloring, the crispness of the imagery and the intimate and up-close camera angles made the audience feel like they’re right there in the stunning green countryside of Suffolk.

What detracted from the film was the repeated use of cutaway shots. At a moment’s notice, dialogue could be heard between characters, such as Pretty and Brown, but then on screen, images of something unrelated to them or what they’re talking about popped up. It distracted me from the depth of certain conversations and led to plenty of annoyance. The only saving grace was how beautiful and compelling the shots were — I just wish they had matched what was actually happening then and there.

I did appreciate the text at the end of the film explaining some of the heartbreaking details that occurred after the real excavation of Sutton Hoo. However, there were still discrepancies in telling the full, true story. For example, heartthrob Lomax was completely made up. In fact, the movie erased the very real fact that two groundbreaking women — Mercie Lack and Barabara Wagstaff — were responsible for approximately 60% of the dig’s photographic record, some of which were the first colored archaeological images in the United Kingdom. Furthermore, women like Pretty and Peggy were seemingly “dumbed down” for the film. In reality, Pretty was one of England’s first women magistrates, was invited to Parliament and grew up around archaeology because of her father’s work. The real Peggy was well-educated and respected, but in the movie, she seems to be there only for a) the romance with Lomax and b) her petite size and assumed “gentle touch” in dealing with precious treasure (as Phillips not-so-subtly points out).

Another imaginative embellishment to the film was Stuart’s sexuality. There’s no evidence Stuart was gay, although he really did divorce Peggy in 1956. Other moments, such as a character being buried alive, have no basis in reality. I didn’t mind these aspects too much; after all, a movie should be interesting and enjoyable, and they added to the true story rather than taking away, like the case of the women’s lack of representation.

Still, I would recommend watching the movie for its fascinating story and beautiful imagery. Viewers should then use it as a launching point to dig a little deeper into the true history of Sutton Hoo and its hidden gems of history. 3/5