LadyCats fall short against the Titans 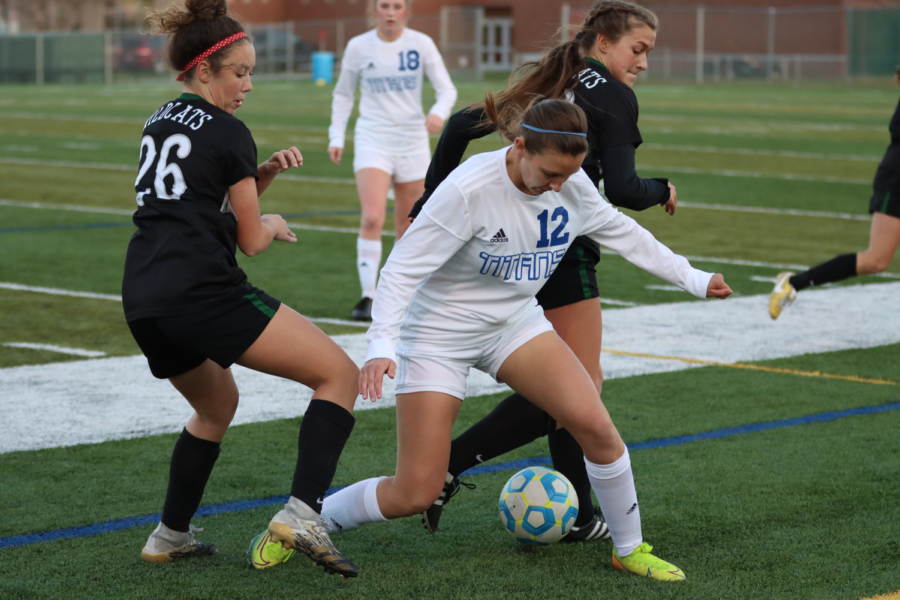 Freshman Alyssa French plying a solid offensive role in a 5-2 loss to Papillion La-Vista South. She had one goal.

The #6 Millard West soccer team faced off against the #3 Papillion La-Vista South Titans in a big match on Thursday, April 1.

Going into the game the LadyCats were 4-1 coming off a shootout win against Elkhorn South. With a three way tie for the team leader in goals scored, freshman Giuliana Gagliolo, sophomore Sienna Davis, and junor Niah Kirchner, all have two goals coming into this game. Freshman Ella Konwinski has been having a nice season at goalkeeper with 30 saves and only six goals allowed.

The visiting Titans came into this game with a still undefeated 4-0 record. They are led by senior striker Allie Napora with 11 goals on the season so far. Junior goalkeeper Jenna Shultz also had a nice season inside the goal post with 19 saves and only three goals allowed. This was a matchup that would have a big impact around the top 10 in Class A girls soccer.

“Going into games like these where I know the team is really good I always get nervous,” Konwinski said. “The Papio South coach was my old club coach so I knew his team would play really well. Even though I was nervous going in, as soon as the game started my nerves calmed down and I focused on the now.”

Papio South started off with possession at the start, the Titan offense was able to keep the ball in Millard West territory for the majority of the beginning of the game. Ten minutes in and both teams were to get at least one shot on goal but saved by both goalies. An out of bounds play by Napora, who tossed it in from the left sideline, in stride for sophomore Savanna Solomon, quickly passed it to the right side of the field to sophomore Laina Souerdyke, who knocked in the first goal of the night to put the Titans up 1-0 with 23:08 left in the first half. The Titan defense did not let the Wildcats get very much further with Shultz, who tacked on three more saves. On a free kick opportunity, Napora sent the ball towards the bottom left corner of the net and snuck past Konwinski for her 12th goal of the season, the Titans extended their lead to 2-0 with 15 minutes still to go in the first half. On another free kick opportunity, junior Mia Lang shot it to the upper right corner and scored her second goal of the season. The first half would end 3-0 with the Titans up big with 40 minutes remaining.

“I thought our intensity in the first half was lacking and the desire to play wasn’t there,” Davis said. “Coach Tevis picked us up and motivated us by telling us to win the second half and everyone started to come together. Everyone pushed each other and kept encouraging each other to stay strong and not dwell on mistakes.”

The second half started off solid for the Wildcats, they were able to push the ball with more aggression than they showed in the first half. Shultz was able to add on another save with a nice catch to save a senior Meghan Knudson goal. Seven minutes into the second half, on a corner kick, junior Elisa Franke kicked it to Kickner in the center, Kickner was able to pass it back to sophomore Ally Stoneburner who put it in for the Wildcats first goal of the night. After a nice defensive play by Shultz, Gagliolo passed it back to freshman forward Alyssa French who shot a curve ball across the field to the top right corner to cut the Wildcats deficit by one with 20 minutes left in the game.

“This game hurt but I truly think it will be a great way to learn,” Davis said. “We saw our weaknesses and will continue to work on them in practice and hopefully overcome them. We didn’t leave the field with our heads down, it was nothing but positivity after the game. I think this loss will motivate us to play our best. As much as I hate the result, I hope this will be one learning point to build ourselves.”

Even though this team looks a lot different since their state championship run two years ago. This team is still looking to make a run this year.