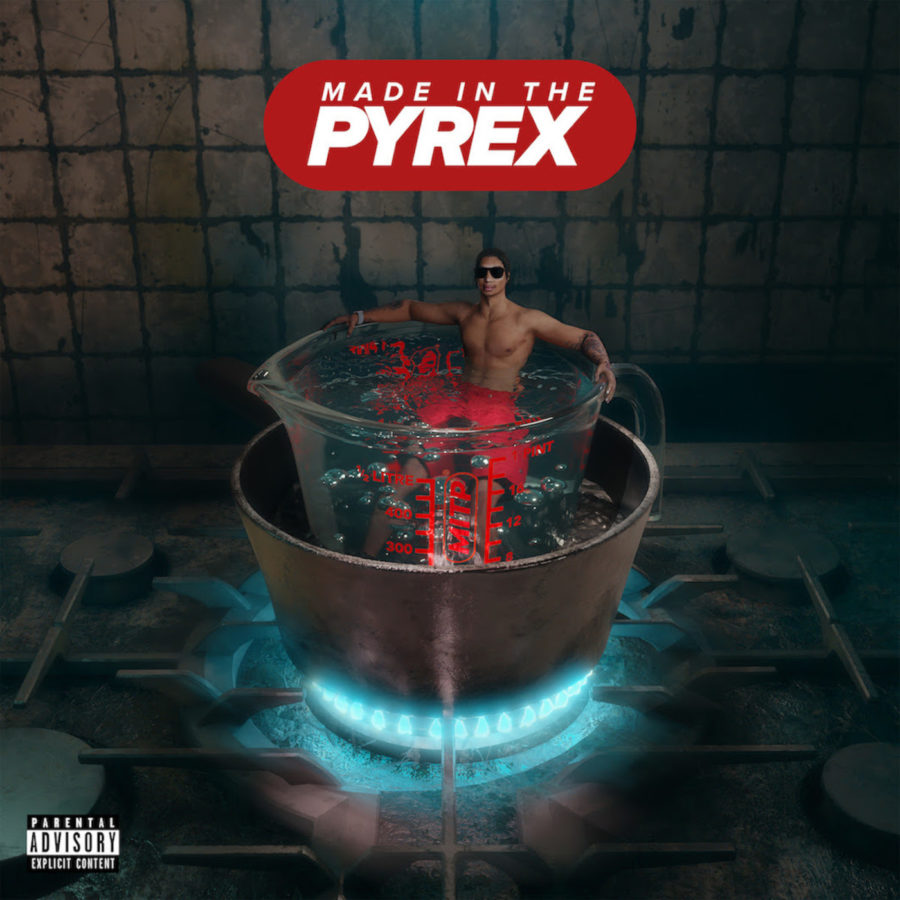 The cover art for Digga D’s new album “Made In The Pyrex.” Digga has ran the U.K. drill scene for years now and his second album continues the hot run he’s had.

United Kingdom drill rap is possibly the most controversial form of hip hop around today. At the forefront of one of the hottest growing genres is 1011 artist Digga D. At only 20 years old, he’s taken the drill world by storm, having the majority of most absolute drill classics.

Despite being in and out of prison, his support around the U.K. is incredible, shown on full display after his 2019 project “Double Tap Diaries.” After a popular short documentary about censorship following a court ruling that banned him and other 1011 members from making drill rap, the support for Digga has only grown, leading him into his newest album “Made In The Pyrex.”

The intro titled track is pretty short, and surprisingly isn’t a drill track. Digga spits a few bars over a simple piano beat, almost stamping his ground before he gets into the meat of the album. This transitions into “Bluuwuu.” The single was released the day of the album, and is the definition of pure U.K. drill. While censoring the name of numerous rivals throughout Britain, he spits about his notoriety changing throughout the years. He throws in a quiet “Bluuwuu” ad lib in between throughout.

“Chingy (It’s Whatever)” contains one of the best drill beats I’ve ever heard. With a shifting sample in the background, Digga dominates the beat with his face. Being one of the tracks he dropped after returning from prison, it just creates an even harder vibe to the song than before. Following that was one of the top singles before the album, “Bringing it Back” feat. AJ Tracey. Being another song released after a hiatus, Digga’s idea of bringing back his old flow is clearly reciprocated by fellow drill rapper AJ Tracey. The hook of “this the old flow, man’s bringing it back” shows the clear intentions of the track by Digga.

The next track is “No Chorus” feat. M1llionz. Digga and M1llionz channeled their inner Michael Jordan and Scottie Pippen on this track, going tit for tat with each other as a duo and murdering another slick drill beat with a demented dark background in the sample. Then comes the biggest single leading up to the album, “Woi.” Amassing over 17 million views on YouTube, he threw the iconic track on the album. It’s considered a total drill classic. With the constant “woi” ad libs in the background, it’s easy to see why this track did so well for him.

After the 40 second interlude titled “Clout is killing my people,” comes the eighth track, “Folknem,” with Savo and ZK. It’s a three headed goat of drill artists, with each artist going in when their chance comes and leaving the beat destroyed every time their verse is over. The title of the song pays homage to a Chicago term, putting a U.K. spin on “foenem.” This is made even more obvious after Savo spits the line “G like Herbo, G like Polo,” referring to Chicago artists G Herbo and Polo G. This led into “My Brucky.” The first song since the intro without a drill beat, Digga still finds a way to deliver on the song, name dropping people left and right. The hook almost sounds reminiscent of something you’d hear from 50 Cent.

The tenth track, “Gun Man Sound” returns the drill sound. It’s a solid track, continuing the same drill formula like it’s business as usual for him. The following track is probably a total miss however. “Window” brings a more Jamaican sound to the album. The flow is pretty good, as per usual for Digga. The Jamaican voice he uses on the track followed by the high pitch voice tuning just doesn’t work for me, especially in place on a drill album.

The second to last track “Trust Issues,” is more so the outro for the album. It’s almost an end of day reflection for Digga, talking about despite anything that’s happened, he claims he doesn’t trust anyone other than his mother. It pretty much sums up the life that he’s lived for years, having to worry about the right person to trust. He asks himself “I don’t trust myself, why would trust a friend?” This transitioned into the final track on the album, the previously released “Toxic.” It sort of goes away from the street life, more so describing Digga’s relations outside of it. The hook, exclaiming “You said that you seen me on U.K. gossip, cool, we established I’m toxic.” He pretty much accepts it himself, while killing a drill beat with a slow guitar strum. It’s another one of my favorites on the album.

Digga had a few bumps on the album, but absolutely killed it for the most part, especially on the drill tracks. “Made In The Pyrex” is a solid 7 out of 10, and Digga is still running the streets in the U.K. as the most polarizing and intriguing figure their drill scene knows.