High prices do more than hold students back 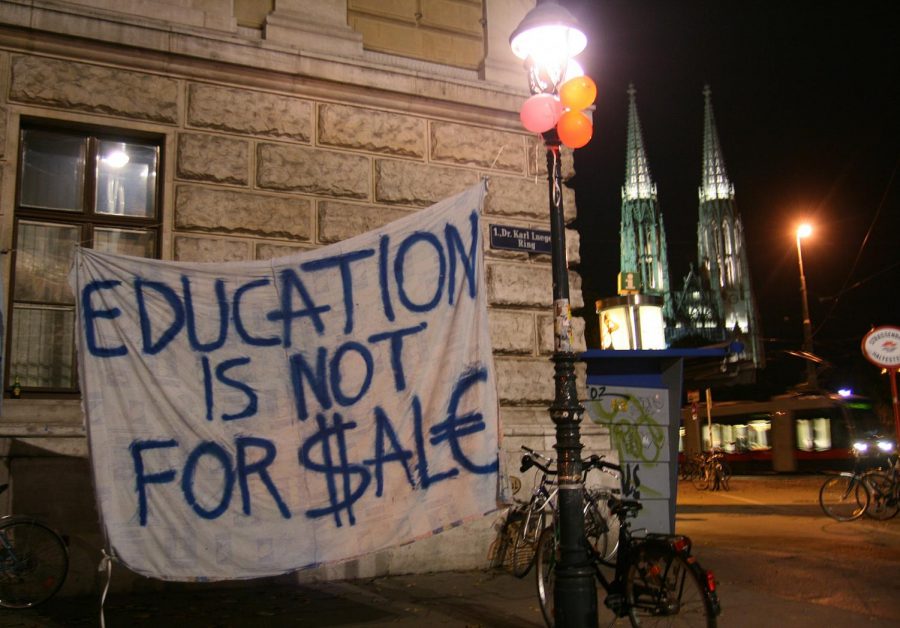 A student protest over tuition fees at the University of Vienna in 2009 still holds the same messages today as prices continue to increase.

As the application season dies down, seniors are left establishing their choice schools. Factors ranging from their favored programs, location and Greek life play into decision making, yet one variable that stands out is the cost of attendance.

Universities and colleges have notoriously high figures with numbers continually rising. While a majority of students aren’t paying the sticker prices of their education, many of these amounts still require student loans to be pulled. As for today’s seniors, many families have filed their FAFSA and are waiting on financial packages to arrive. Others have set down deposits and are awaiting graduation. Despite this, looming debt is awaiting.

Colleges are infamous for having high tuition costs, even when excluding room and board. US News Education reported in just 2020-2021, tuition’s average pricing for in-state residents for public schools was $11,171 and out-of-state residents being  $26,809. As for private schools, the costs were higher, sitting at $41,411. From these numbers, attending a state school as an in-state resident is clearly the cheapest option of the three, however, this only hinders a student from exploring the world around them. Even looking at just Nebraska, each of the state schools hold the same undertones of being a small city with small town feels. This does play as a sense of comfort, but at what point will someone enter new environments and take on new lifestyles that are different from what they’re used to?

Even looking at students who choose out-of-state schools, these individuals are spending $15,638 more when taking the difference of the numbers above. Literally speaking, this number is twice the amount of the in-state cost, but federal aid and scholarships help support the financial burden. Depending on the scholarship, the amount can help cover a couple of hundred dollars to the full tuition depending on the student’s eligibility, but this can vary from school to school which lowers the number of universities an individual can decide on, especially in terms of location. Pew Research Center found 57% of Americans to align with the prior statement. From the numbers surveyed, 75% said college was too expensive to afford. Looking at this information, the general consensus would entail the cost of college puts a damper on the end goal of receiving benefits as an individual with a degree.

As for students who are already attending high price universities, these institutions almost feel like they continue to raise the bar until others step in. One example of this could be seen in January of 2021 when students at Columbia University withheld the semester’s tuition, demanding the New York City school lower costs during the pandemic as classes were held online. Rightfully, these individuals just wanted to get their money’s worth, especially during a pandemic with so many job losses and financial burdens. While this is one instance, it is not unlikely to see more individuals follow as colleges continue to charge high rates for online courses. Even when many students do choose to pursue higher education, many of them agree the cost of their education fails to provide good value for the money.

To combat this, families can take out student loans to supplement the costs, however, these can either help students get ahead for their future careers or slip them into crippling debt. From this, obtaining future assets becomes more difficult as 36% of individuals with outstanding student loans are less likely to purchase a home. The New York Times remarked  “Those with student loan debt also are less likely to have taken out car loans. They have worse credit scores. They appear to be more likely to be living with their parents.” For me, this sounds like the farthest thing from the “college experience” everyone raves about.

As for addressing student loan debts and repayments, the Biden Administration has put a freeze on student loans with the hopes of allowing more Americans to pursue necessities such as groceries or rent during the pandemic. This does put a relief down for students who do have debts, but this does leave uncertainty as there is a split between canceling all student loans or reestablishing the same processes after life returns to “normal.” Even after students take on their first year, completion of the degrees has obstacles financially as the Lumina Foundation and Gallup found 25% of the U.S. adults stopped their work because of the costs.

Pursuing and investing in higher education can be especially crucial for individuals who are seeking out careers in rigorous fields, but obstacles are more than likely to occur. The best thing institutions can do is provide for the students who do want to attend. Lowering tuition costs would invite more individuals onto campuses, but also open up doors for individuals who don’t attend college because of the overall price. This can be done by reducing textbook costs, offering a three-year bachelor’s degree, or even promoting a school’s competition over the reputation of the institution.

Receiving a higher education is a huge privilege in itself, especially when it comes to an end goal of becoming a better citizen in society, but at what cost do families have to pay to receive this opportunity? It’s clear the current numbers take away opportunities, even for students who can afford the costs, however, it’s only a matter of when schools will begin to lower their prices.