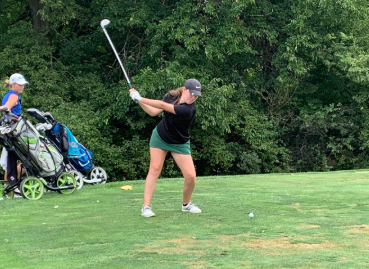 Evans drives the ball onto the fairway. Although it wasn’t her best round she believes she will be able to perform better. “I think to improve overall I will have to make sure I can strike my clubs pure a majority of the time,” Evans said. “I can't be making silly mistakes that cost me too many strokes.”

On Tuesday September 29, the Millard West Girls Varsity Golf team took place in the Metro Conference Meet. Millard West competed alongside Millard North, Millard South, Westside, Papio, Papio South, Marian, Elkhorn South, Bellevue West, Bellevue East and Gretna. The meet took place at the Elmwood Golf Course. It was the Wildcats’ first time playing on the course this season and that presented some new challenges. Millard West sent five golfers to the meet, it wasn’t their best showing, but they believe that they can improve greatly.

The Millard West team was led by junior Ashlyn Liudahl. Liudahl started the day off strong by shooting a very solid 42 on the first nine holes. This score put her tied for 7th place after half the course, however, she faltered during the second half of her game and shot 48 on the final nine holes. This gave her a total score of 90, which is a very strong showing. The top 15 finishers received medals and Liudahl placed just outside of that in 16th place.

The second place finisher on the Wildcats’ team was junior Emily Evans. Evans started her round off strong with a score of 45 on the first nine holes, however, she also lost some strokes on her final nine holes, shooting 48 on the second half of the course. She too had a very good day overall with a score of 93 which put her inside the top 25 finishers. Evans hoped for a better showing as she had scored better on the course in previous seasons but is overall pleased with the way she performed.

“I did hope for better going into the tournament,” Evans said. “I’ve shot an 84 on the same course before so I think my expectations were high. I’m overall pleased with my score though because I did the best I could with the circumstances I was in.”

Coming in third place for the Wildcats was junior Maddie Fontana. She had a good showing on the front half of the course shooting 51 on the first nine holes. She backed that up with the same score on the final half of the course too. This gave her a total score of 102, which she believes leaves room for improvement.

“I wouldn’t really say that this was my best tournament that I’ve played, everything was just off,” Fontana said. “My irons weren’t going straight, and putts weren’t lining up. I could improve on being more consistent with my drives and taking longer lining up my putts on the green.”

Finishing in fourth place for Millard West was junior Lauren Vanderholm. She shot a score of 50 on the first nine holes of her game which is a solid start. However, she fell off a little bit on her second half of the course shooting a score of 57. This gave her a total score of 107 which isn’t her best showing, and she believes she can improve.

Coming in fifth place for the Wildcats was junior Annie Wakefield. Wakefield shot a score of 51 on the first nine holes and 58 on the final nine holes. This gave her a score of 109 which she believes is not a very good outing from her.

“I played the worst I have played all season, so I definitely would not consider this a success,” Wakefield said. “Although I was playing poorly, I would say the most successful part of my playing would have to have been my three wood. It was the only club I was hitting well. I am not happy with my score, and I was hoping for a better outcome.”