Nas returns to his throne 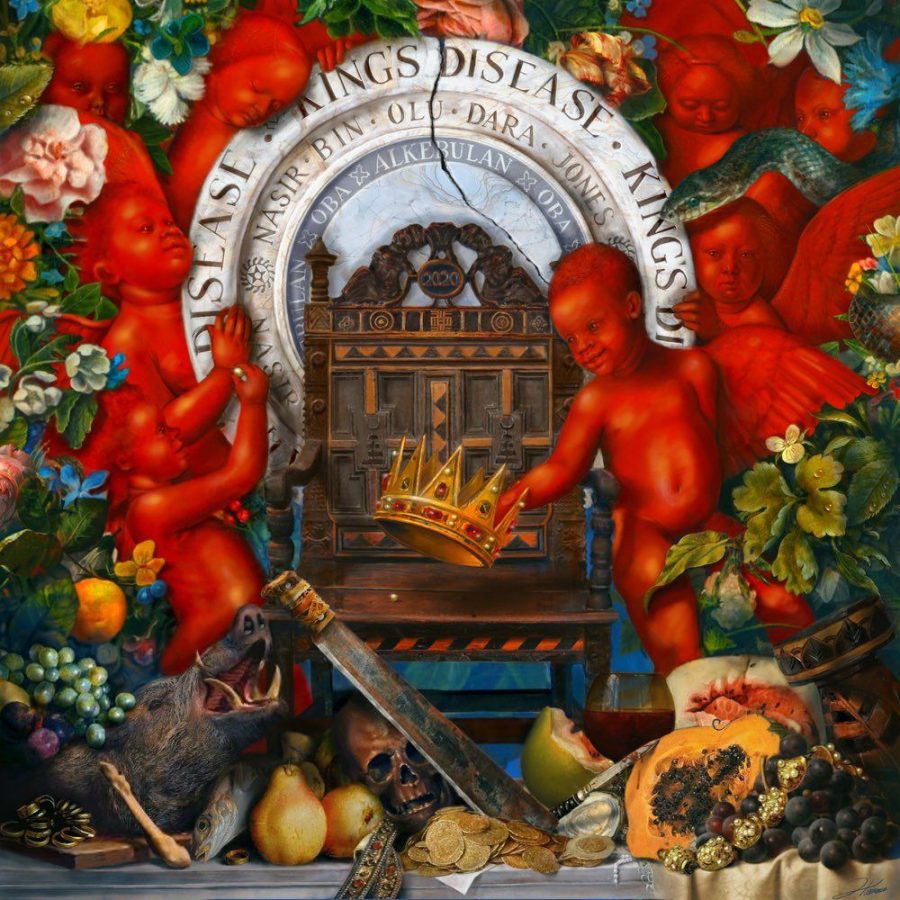 Nas released his last album in 2018, a collaborative effort with Kanye West called “NASIR.” It’s been a few years since Nas fans got a true full length album, and Nas delivered on his new piece.

On August 28, 2020, New York rapper and hip-hop legend Nas released his thirteenth studio album “King’s Disease.” Nas has consistently been considered one of the greatest rappers of all time, most notably for his 1994 debut album “Illmatic” which is critically regarded as one of the best albums in hip-hop’s history. It’s been hard for him to even attempt to top it, but he has had some great projects throughout the years such as “It Was Written” and “I Am…”

Coming off of his last album, “The Lost Tapes Vol. 2,” not many people were expecting a classic Nas album. While the 46-year-old’s best days are likely behind him, he still has the talent and ability to put out great music. The album features 13 tracks with 13 features spread across the project and is produced entirely by legendary producer Hit-Boy.

Nas opens up the album with the title track, which uses a muffled soul sample in the back of the beat as the intro. It is a solid intro that leads into the second song, “Blue Benz.” It’s a clean transition, moving straight into a hard and brash old school style of rapping from Nas. It’s two very good, but short, opening songs, clocking in at around four minutes between the two.

He goes back to a slower approach on “Car #85” which has a feature from legendary R&B artist Charlie Wilson. It’s a catchy song with a clean hook and a reminiscing tone. The next song, “Ultra Black,” was the main single leading up to the album, gaining notoriety for dissing artist Doja Cat for her racist comments. It relates very heavily to today’s culture of racial unrest, talking about how he’s “unapologetically black.” After this came one of the hardest songs on the album, “27 Summers.” It has a brash, loud beat from Hit-Boy that merges older rap music with new-school trap beats. It’s another short track, with Nas dropping bars for just under two minutes.

The sixth song, “Replace Me,” is easily my favorite song on the album. It features a verse from Big Sean and one of the best hooks of the year from up and coming Houston artist Don Toliver. The hard bass that comes in mid-way through the hook makes this one of my favorite beats this year. This is an amazing, more modernized song from Nas. His modernization, which has been one of his weaknesses as of late, continues to grow with the song “Til The War Is Won” with Chicago drill artist Lil Durk. Nas used to never do songs with rappers that had popped off in the 2010s, but he finally started to open up with younger artists on this album.

“All Bad” is another slower song, featuring R&B artist Anderson .Paak. It’s a solid track with a reliable feature from .Paak, who is one of my personal favorite R&B artists. The worst song on the album comes next in my opinion. “The Definition” is another short track from Nas, and is supposed to be the track that explains the definition of the title “King’s Disease.” Thirty seconds of the short track though were just corny quotes from Nas.

“Full Circle” gets the album back on track. With features from The Firm, AZ, Foxy Brown, and Cormega, everybody kills their quick verse on the four minute song. It’s another hard, 2000’s type beat, that continues the hierarchy vibe of the album into “10 points.” He recites the word King with different bars in between, placing himself on the throne as one of the kings of hip-hop. The last solo song on the album, “The Cure,” talks about the cure to all evil simply being love and affection for one another. The beat switches mid-way through, continuing the idea that this song is the outro, despite there being one song remaining. He shouts out a pair of late legends, Kobe Bryant and Nipsey Hussle, in the middle of the first verse. It should have been the outro in my opinion, instead of the actual final track “Spicy” featuring A$AP Ferg and Fivio Foreign. Spicy is an alright song with a great verse from Fivio, but it’s still one of the weaker songs that would have served much better as a bonus song on the deluxe edition.

Nas finally ended his drought of quality albums. In the third act of his career, Nas was able to squeeze out at least one more gem before the day he decides to hang up the pen and paper. It’s a great 7/10 album and is probably one of my favorite rap albums this year. It’s great to be able to witness Nas drop another great piece of work as he nears the end of his career.