Playoffs in the Bubble

NBA games with no fans sets up exciting postseason picture 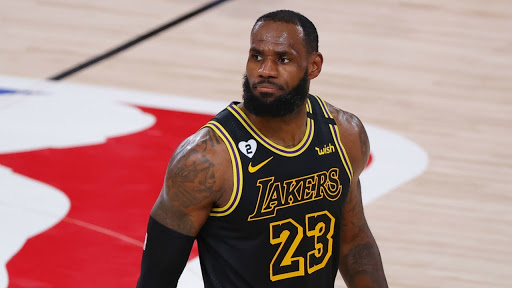 LeBron James dons a special “black mamba” jersey for the Los Angeles Lakers in game four against the Portland Trailblazers. The Lakers chose to wear these jerseys on 8/24, celebrated as Kobe Bryant’s Mamba Day. “We just try to go out there and play our best,” James said. “It’s always nice to do things like this to honor someone like Kobe.” The jersey also featured a “2” patch, honoring the late Gianna Bryant’s number.

When the coronavirus pandemic began in mid-March, none one really knew what it would mean for sports. Then, after a four and a half month hiatus, the league began play inside of a regulated bubble, with only a select group of teams allowed in.

Daily testing, social distancing and masks are required on the campus, hosted by Disney World in Orlando. They chose to utilize three Disney World hotel resorts, with the players given the chances to do multiple events and activities during the day. At the end of the day, these men just want to play basketball.

The seeding games before the playoffs saw some of the craziest falls and allowed the teams to shake the cobwebs. The Phoenix Suns, the worst team in the bubble coming in, went 8-0 in their seeding games, yet due to Portland’s solid bubble performance, they still didn’t make the playoffs. The Los Angeles Lakers clinched the first seed just a couple games into the bubble, and the rest of the seeding fell into place mostly the way it was expected to, except for the Philadelphia 76ers, who dropped from a three seed to a six seed.

Through the first week of the playoffs, the Lakers have proven to be the most dominant team in L.A. Small forward LeBron James had back to back 30 point games in game three and game four, leading the Lakers to a 3-1 lead going into game 5. Across the other side of town, the Los Angeles Clippers found themselves in a close series with the seven seed Denver Mavericks, who have been without their second best player, power forward Kristaps Porzingis. This allowed sophomore sensation, 21-year-old european Luka Doncic, to completely take over, having the best debut playoff series of all-time, breaking points records set by legend Kareem Abdul-Jabbar, and hitting an overtime game winner in game four.

“These records are cool and all, but I just want to win,” Doncic said on TNT, showing off his young maturity and winning mentality. “We just have to climb this hill and slay the dragon.”

The other two series have been great as well, with the Oklahoma City Thunder and Houston Rockets locked at 2-2 heading into Game 5. Russell Westbrook has been hurt the entirety of the series, being unable to play against his former team. Point guard Jamal Murray and his three seed Denver Nuggets trail the six seed Utah Jazz 3-2 after five games, with him and Jazz point guard Donovan Mitchell going at it in game four, both dropping 50 points in a single game.

The Eastern Conference has been a wild story as well, with three series already being over. The three seed Boston Celtics swept the six seed 76ers in four games, causing a ripple effect that would get Sixers coach Brett Brown fired just days later. The other team swept was the five seed Indiana pacers, who were defeated at the hands of the Miami heat, which re-ignited the feud between Pacers guard T.J. Warren and Heat forward Jimmy Butler. The two had consistently gone at it in the regular season, trash talking each other and getting into scuffles.

Warren, a usual solid bench player, shocked the world when the bubble began, scoring over 30 points in four of his six games. The top of the Eastern Conference hasn’t been surprising.

The Raptors, who have been one of the best teams in the league despite losing superstar Kawhi Leonard, swept the Brooklyn Nets with ease in four games, with Raptors coach Nick Nurse being named NBA Coach of the Year a day after the series ended. The Raptors will face the Celtics next in what is supposed to be one of the more anticipated series in the east. The Milwaukee Bucks have almost completed their job as well, leading the Orlando magic 3-1 going into Game 5. The Bucks have been a clear favorite in the east all season, boasting the best record in the entire NBA. Bucks forward Giannis Antetokounmpo was named NBA Defensive Player of the year a day before their fifth game against Orlando. Giannis is also considered by most to be the clear favorite for the NBA Most Valuable Player award, looking to become the first back to back MVP since Stephen Curry in 2016 and 2017.

“It’s incredible to win an award like this,” Antetokounmpo said on “Inside the NBA on TNT” following his game four win. “A lot of people want their minds off of other things right now, and I’m just happy that I can provide that outlet, not only for myself, but for the fans.”

With the NBA putting on an absolute show in the bubble, many teams are still in the hunt for the title, with most predictions looking at a finals showdown between the Bucks and one of the L.A. teams. The quality of play has not dropped, and despite having no fans, the players have been leaving it all on the court.