The day that sports stood still 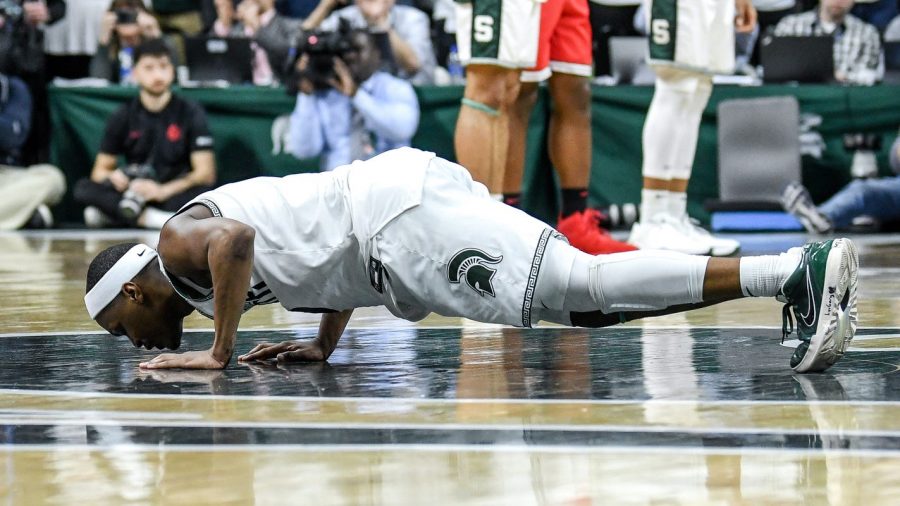 Michigan State senior guard Cassius Winston kisses the floor after checking out on senior day, a Spartan tradition, during their game against the Ohio State Buckeyes. Little did Winston know this would be his last time on the floor wearing a Spartans uniform.

On March 10th, 2020, many college basketball fans scoffed at the news that the Ivy League had decided to cancel their tournament due to coronavirus concerns. Why wouldn’t they? Only around 1000 people in America were infected, and it seemed like the NCAA tournament and all other conference tournaments would go on as planned.

Turns out, the Ivy League was right.

Within the next few days, a domino effect began. All sports announced they’d play without fans. Many people believed even that was an extreme measure, but it was only the tip of the iceberg. By the morning of March 12, nearly half of all college basketball conference tournaments were cancelled. The other half would play with no fans. The 12th and 13th would end up becoming the two most infamous days in sports history.

On the 12th, all conference tournaments had been cancelled, including the Big East tournament, who made their decision at halftime during the Creighton St. John’s game. It seemed temporary, as the NBA said they would play with no fans in attendance. What happened that night shook sports for the foreseeable future. When Utah Jazz all-star Rudy Gobert tested positive for Coronavirus, the NBA immediately suspended the season, followed by all major sports. The Olympics as well as the Olympic Swim Trials have been postponed to 2021.

The following day brought the news nobody wanted. The biggest tournament of the year, March Madness, had been cancelled. NCAA President Mark Emmert later clarified, saying that Gobert’s diagnosis was the nail in the coffin for future sports. The NCAA would also cancel all spring sports including the College World Series.

It really wasn’t supposed to end this way.

We were all robbed. COVID-19 has stolen sports from us, and likely won’t give them back soon. Using the word “tragic” might be extreme, but it is fairly close to it. Maybe there are some good prospects to this. Maybe fans will begin to appreciate sports more than they should. Maybe we all took this for granted.

It is unsure when sports will come back. It’s rumored that baseball season will be cancelled, as well as all winter sports seasons that are suspended. Many even believe that the NFL and College Football seasons are in jeopardy as well. Now fans have to resort to watching old classic games and highlights, leaving everyone wondering what shining moments could have been made this year.