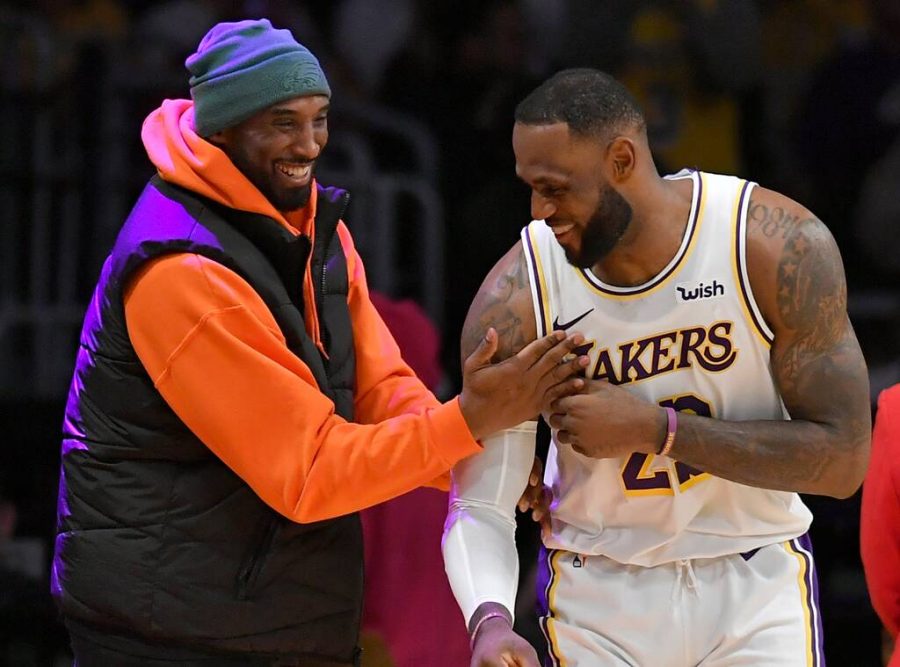 Lakers forward LeBron James banters with the late Lakers legend Kobe Bryant in a game earlier this season. Bryant passed away in a tragic helicopter crash with his daughter and seven others, just the morning after LeBron passed him for the number three spot on the all time scoring list.

In the wake of the horrific and tragic deaths of NBA legend Kobe Bryant, his daughter and eight others, the NBA has already been tasked with playing past the tragedy. It had been a tough and contested race until that point, but some things are bigger than basketball. Every player was affected, with most of the league growing up idolizing the 41-year-old all time great.

Some players were even challenged by playing on Sunday, January 26th, just hours after they found out about the death. However, the NBA effectively cancelled the Tuesday night game between the Los Angeles Clippers and LA Lakers per request by the Lakers organization.

Sadly, the show must go on. It’s been fairly tight this year, with it being the “year of the duos.” The Milwaukee Bucks and the Lakers are at the top of their respective conferences, the Bucks with a 41-6 record and the Lakers with a 36-10 record. The Lakers have failed to win big games though, whereas the Bucks have fared well when playing against other top opponents.

The Bucks have found help around reigning MVP Giannis Antetokounmpo, with veteran guard Khris Middleton dropping 51 points in their last game. The Lakers have been solid when Lebron and star forward Anthony Davis play well, but lack depth behind those two. With the trade deadline in a week, they are likely to explore the trade market.

“I think we’re good where we’re at,” Lakers forward LeBron James told ESPN. “If the front office makes a move, we’ll work with what we got, but I think we’ll be alright.”

The Lakers rival, the Clippers, sit right behind them in second place in the conference. Star forward Paul George has missed some time this season, which likely hindered their current 33-14 record. The Nuggets have sat in the three slot behind them almost all season, hoping to break past the second round, where they lost to the Portland Trailblazers last season.

The Eastern Conference has a top-heavy problem. The top six teams in the east have 31 wins or more. After that, however, it is filled with sub .500 teams, including three of the four worst records in the league. The seventh seed Orlando Magic have a record of 21-27, which somehow got them a playoff spot.

“Usually it becomes a gauntlet come playoff time,” 76ers star center Joel Embiid told The Athletic. “Records don’t matter by then, cause we already in that position at that point.”

The Sixers lost in a last second finish vs the eventual champion Toronto Raptors last season. Kawhi Leonard’s long-range jumper knocked around the rim six times before dropping into the hoop, sending the 76ers back to Philadelphia.

The MVP race has stayed fairly close this year, with the usual suspects at the top. A new name though is Slovenian superstar Luka Doncic. Doncic is in just his second season, and he is averaging 29 points and 9 assists a game.

“I just keep trying to improve my game,” Doncic told ESPN. “The more tools and skills I pick up the better I become.”

This season has been wild to say the least and most of these players will now have the task of playing through tragedy. The next four to five months of NBA action will be packed with emotions, grief and many players looking to honor their idol with an NBA championship.