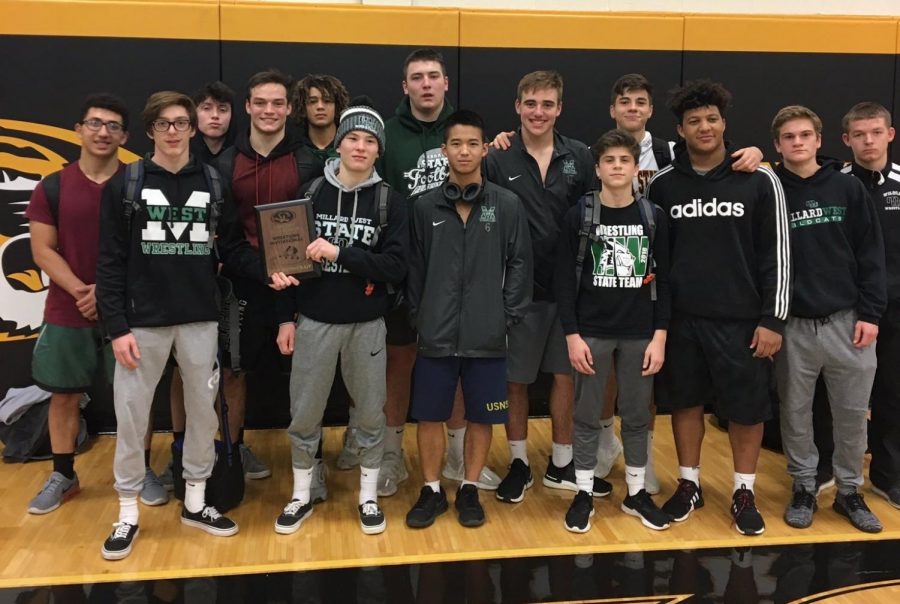 Millard West Wrestling finished as a runner-up at the Fremont invitational. The Wildcats had ine medals, including 4 champions.

On Thursday, December 5th, Millard West Varsity Wrestling had their first dual of the season at Creighton Prep.

After a long offseason, the wrestling team was ready to start the season off strong and get a first look at this years squad. Last year ended well after Millard West’ had one State Champion, Camden Russell, who wrestled at weight 126lbs. Russell was a leader on the team last year, and now it was time for this years leaders to prove themselves.

All offseason the team was putting on muscle in the weightroom while still having to maintain their weight class for this season. Cutting weight was an offseason prep for the whole team, a lot of the team didn’t make weight so the team was at a disadvantage for the first dual.

“Leading up to the season, during practice we would do numerous amounts of drills and cardio workouts,” junior Zach Bartlett said. “Stuff like running, agility workouts, and working on our wrestling technique helped us lose weight and prepare for the season.”

The day of the dual the team had weigh-ins for their matches against Creighton Prep. Most of the team didn’t make weight which resulted in open weight classes for the dual. When a team has to do open weight classes it’s a forfeit and the other team gets six points which is the same amount of points a team would get for a pin in a match.

“Cutting weight before the first dual was tough.” junior Kaden Williams said. “A lot of the team was over their weight this time so we were at a disadvantage against Creighton Prep. We knew Prep had a decent team this year in all weight classes so this first dual was going to be a challenge.”

At six o’clock the first match kicked off for the Wildcats and the dual was underway. Several matches were going on at once and the team scores were close for most of the dual. Millard west won the first 3 of 4 matches and had a hot start, wins coming from senior Wyatt May and senior Nate Hartman. Millard West got a 21-6 lead after five matches, the dual looked as if it would be a blowout but the Jr. Jays kept pushing. Prep immediately won 5 consecutive matches and jumped up 33-21 over Millard West. After back to back pins from the Jr. Jays, Millard West was defeated 43-33.

“It was a good first dual, it just shows us that we now have to work even harder to get better,” junior James Vawter said. “We took a lot away from this dual when we lost because most of our team didn’t make weight and that put us at a disadvantage.”

Millard West starts the season off with a loss but look to bounce back on December 21st at the Waukee Invite that starts at 8:30 AM. The Wildcats must work hard and maintain weight for the next wrestling dual so that they aren’t put at another disadvantage.