It’s not ‘sick’ to get sick

Receiving a flu vaccine is crucial for a healthy society 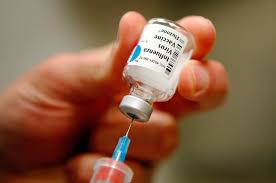 Flu vaccines are used to stop the spreading and advancing of the influenza virus in populations.

The flu, also known as influenza, is a contagious virus that infects the nose, throat and occasionally the lungs. Upon contraception of the illness, symptoms include fever, cough, sore throat, body aches, etc. In some cases, symptoms become so severe that hospitalization takes place. As the temperatures begin to drop, the spreading of this virus accelerates and hits a high. In 2018, Oxford Academic found that 3% to 11% of the U.S. population gets infected and develops flu symptoms each year. This would approximately be 9,816,000 people to 35,992,000 people affected.

Because the spreading of the virus is so easy, people are affected and left defenseless while sniffling and continuing to spread the disease. As a result, solutions such as vaccination should be implemented in order to maintain a healthier society and population as a whole. Although some individuals may argue that every year the flu season is different, distributing the shot to individuals will diminish the numbers of cases reported and will result in a better fit population.

From the Centers for Disease Control and Prevention, flu vaccines cause antibodies to develop in the body about two weeks after vaccination. These antibodies provide protection against infection with the viruses that are used to make the vaccine. Because of this, if an individual were to develop flu symptoms, their immune system would have the support and boost to fight off the infection with more ease.

Without these antibodies, people affected spend a longer time recovering from illness and have a tougher time fighting off disease. For those who are more susceptible to getting sick, hospitalization would have to be required for treatment. This inconvenience would only cause stress to those who are sick. Having a healthier immune system would only aid in future health concerns.

Upon receiving a flu shot, individuals become participants in a concept called herd immunity. In large populations, herd immunity protects large numbers of people from spreading bacteria and disease. The American Academy of Pediatrics describes herd immunity in a 2016 article titled “It Takes a Herd” as protection from contagious disease that an individual benefits from as a result of living in a community where a critical number of people are vaccinated.

This simply means that if everyone received a vaccine, then spreading and contamination cuts down. Although herd immunity is only an ‘indirect’ form of protection, getting the flu vaccine is always the optimal option because the recipient will not have to rely on the population around them to not get sick. Not getting the vaccination would not only inconvenience a patient’s health but also unsuspecting victims of the illness. As a result, bacteria will continue to spread to a new host.

Individuals who steer away or avoid receiving the vaccination only feed into the epidemic of people getting sick. This only creates a continuous loop that societies are stuck in when it comes to health. Pursuing a flu vaccine every year can and will cut down on the number of cases and the number of people who endure the virus.