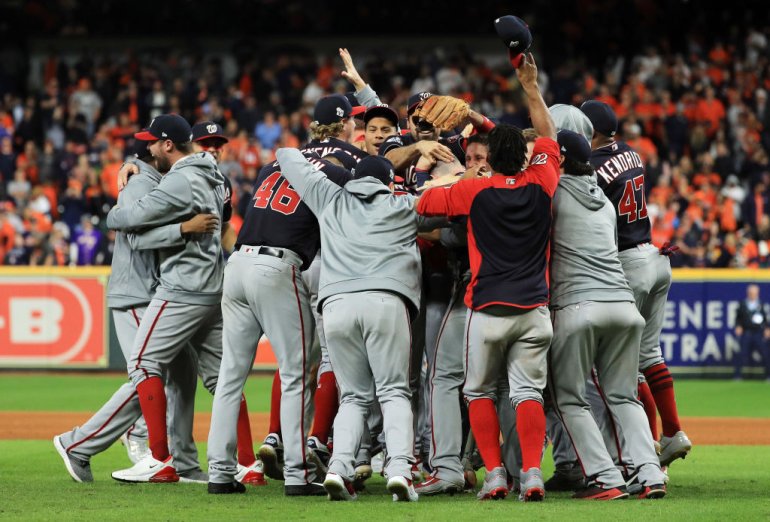 The Washington Nationals are pictured dog-pilling on the mound after winning their first World Series championship in team history. From now on, they will be called the best team of the 2019 MLB season.

The 2019 World Series has been set: the powerhouse Houston Astros will be taking on the underdog Washington Nationals. The Astros have been in two of the past three World Series’, while the Nationals are playing in their very first one. The Astros won a league high 107 games this year,  putting them tied for the eighth most wins in a season since 1900. Meanwhile, the Nationals won only 93 games this year, narrowly putting them in the playoffs.

The path to the World Series for these two teams was completely different. Houston was taken to five games by the Tampa Bay Rays in the American League Division Series (ALDS) and won the series 3-2. Being taken to five games in the ALDS was not the ideal start the Astros’ playoffs. The Astros were able to rebound with a strong series against the New York Yankees in the American League Championship Series (ALCS), winning that series 4-2. These two series alone sent the Houston Astros to the World Series.

Game 1 of the World Series marked the very first game the Nationals have ever played in the series. The game was set up to be a pitchers duel, with Max Scherzer pitching for the Nationals against probable Cy Young Award winner Gerrit Cole for the Astros. However, the game turned out to be anything but a pitchers duel. The teams racked up 19 hits combined for a total of nine runs in the game. Center Fielder George Springer had a great game for the Astros, he hit 2-3 with a double, homerun, and two RBIs. The star for the Nationals was left-fielder Juan Soto. Soto hit 3-4, with a single, double and homerun, he also racked up three RBI’s in the game. In the end, the Nationals won the first game by a score of 5-4. It was the first win in the World Series in team history. This gave them a surprising 1-0 lead in the series.

Game 2 was a matchup between Astros’ pitcher Justin Verlander and Nationals pitcher Stephen Strasburg. This game was also supposed to a very good display of pitching from both teams. The Nationals, were the only team to hold up their end of the bargain. The Astros were held to only nine hits in the game, while the Nationals had fourteen. Astros second-baseman Jose Altuve was the star for the Astros, he went 2-3 with a single, double, and scored a run. All of the Nationals were on fire, but right-fielder Adam Eaton stood out the most. Eaton hit 2-4 with a single, homerun and two RBI’s. The Nationals exploded for 12 runs in this game, winning it by a score of 12-3. This was their second world series win in team history and gave them a 2-0 series lead.

Game 3 was the first World Series game played in Washington since October 7, 1933. Pitching for the Astros was Zack Greinke and for the Nationals it was Aníbal Sánchez. In the game, the Astros were led by left-fielder Micheal Brantley. Brantley hit 2-4 with a pair of singles, and two RBI’s. He was able to help the Astros take a lead in the game, and keep them there. The Nationals looked pretty abysmal on offense, except for center-fielder Victor Robles. Robles hit 1-3 with a triple, and the Nationals only RBI of the game. With the lack of offense for the nationals, they were only able to score one run in the game. The Astros won this game by a score of 4-1, and brought the series within reach. Even with the win the Astros were trailing in the series overall, 2-1.

Game 4 was a chance for the Astros to tie the series at two games a piece. They would put their faith in pitcher Jose Urquidy, the Nationals were trying to extend their series lead and had Patrick Corbin on the mound. The Astros offense had a great game all around, but third-baseman Alex Bregman led the charge. Bregman hit 3-5 with two singles and a grandslam. He his grand slam in the 7th inning, scoring four runs. Bregman also had a total of five RBIs in the game and led his team in that stat. The Nationals were slow on offense again, however Soto had a pretty good game. Soto hit 1-3 with a single and the teams only RBI. The Astros’ offense came the play in this game and scored a total of eight runs. The Nationals were not as successful, scoring only one. The Astros dominated this game and won it 8-1, with the win, Houston brought the series to a 2-2 tie.

Game 5 was a chance for both teams to take a lead in the series. The Astros would give the pitching duty to Cole, while the Nationals gave it to Joe Ross. Ross had a pretty rough game on the mound, he gave up four earned runs in only five innings pitched. A good amount of the damage came from Astros left-fielder Yordan Álvarez. Álvarez hit 3-3 with a pair of singles, a homerun and two RBI’s. The Nationals once again had a slow night on the offensive side of the ball. Cole had a much better outing then he did in game one and he had the Nationals completely fooled of offense all night long. Soto was the only one who could seem to hit anything off Cole. Soto was 1-4 with a homerun, and the Nationals only RBI of the game. With another slow night for the nationals bats, the Astros easily won game five. They won this game by a score of 7-1. This puts them in a great position to win the series, they have to win only one more game and they will have home field advantage for the final two games of the series.

Game 6 was the Astros’ first chance to seal the deal. They would put their faith back in Verlander to pitch for them, the Nationals needed to win this game to force game seven and they would give their pitching duties to Strasburg. The Astros offense did not come to play in game six, they were only able to muster two runs off Strasburg. Bregman, however, was not slow at all: he hit 2-4 with a single and homerun. The Nationals on the other hand had a great night offensively. They were lead by third-baseman Anthony Rendon, he hit 3-4 with a single, double and homerun. Rendon also hit in a team leading 5 RBI’s. With the powerful night offensively, the Nationals were able to avoid elimination and forced the series to a Game 7, a winner take all game and the winner will be the 2019 World Series Champions.

Game Seven: the two greatest words in baseball. The World Series came down to the next nine innings of play. This was the first time we saw two Cy Young winners as opposing starters. Greinke was back on the mound for the Astros and Scherzer for the Nationals. The Nationals were once again slow of offense, they couldn’t get anything going off Scherzer. However, Greinke was pitching even better than Scherzer so the Astros were able to stay in the game. The player of the game for the Astros was undoubtedly Greinke. He pitched six and one-third innings giving up two hits and only two runs as well. Greinke pitched a great game, but it wasn’t quite enough. When Greinke was fading, the Astros manager went to the bullpen and that is where the Nationals scored most of their runs. The Nationals only runs of the game came in the seventh, eighth and ninth innings of the game. The Nationals were lead by their designated hitter Howie Kendrick. Kendrick hit 2-3 in the game with a single, homerun and two RBIs. His homerun was a real turning point in the game, it came in the seventh inning when the Nationals were down by one run; his two-run shot put them up one run. With the powerful night on offense the Nationals were able to win Game 7. With the game seven win the Washington Nationals are the 2019 World Series Champions!