The Year of Dynamic Duos 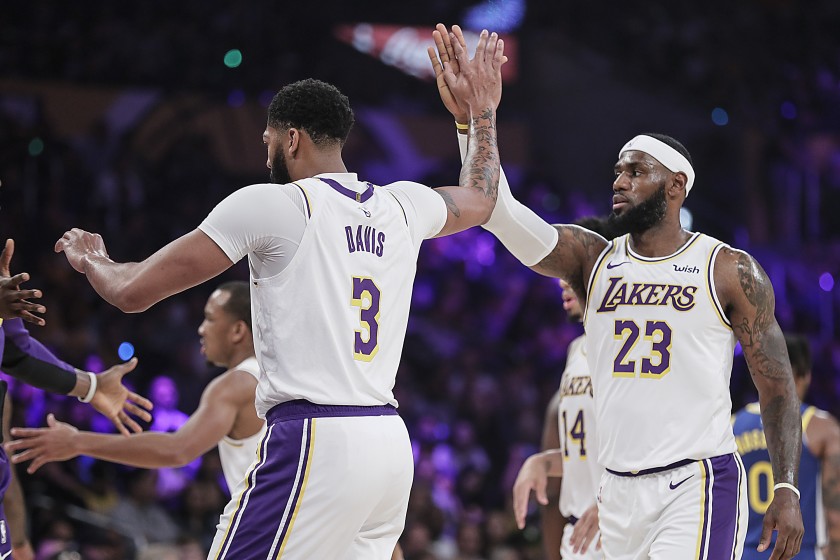 LeBron James and Anthony Davis celebrate after a defensive stop. The James and Davis duo has been anticipated around the league for months.

As fall approaches, so does the NBA Basketball season. After a short era of “super teams,” the superstar talent is spread out through many organizations in the form of duos. After last year’s NBA Finals when the Raptors beat the Warriors in a best of seven game series, free agency was the only talk for the offseason. Many teams are finally finishing their rebuilding years and are serious contenders for the 2019-2020 season.

This offseason free agency changed the NBA forever. This is the year of the duos, Superstars all across the nation teamed up in different cities chasing a FInals championship.  Kawhi Leonard and Paul George connected in Los Angeles to play for the Clippers. Anthony Davis signed with the Lakers to help LeBron get his fourth ring. Russel Westbrook signed with the Rockets alongside James Harden and look to bring Houston their third Finals Championship. Joel Embiid and Ben Simmons continue to try to bring success to the young organizations. This is the era of dynamic duos, fans are excited to see new talent in the NBA as well.

In June 2019 the NBA draft set place in Brooklyn, New York. The draft is a very exciting time for all the teams but especially those with not as much talent. With the first pick in the draft the New Orleans Pelicans selected the hyped up power forward from Duke University. Point Guard Ja Morant was selected second to the Memphis Grizzlies, the Grizzlies were very low at the PG position last year and Morant was a good choice for them. After 60 picks in the draft the NBA gained much young talent that will mold the future for their teams.

For the Eastern Conference this year the front runners are the 76ers. After last years Eastern Conference Semi-Finals when the 76ers took the Raptors to 7 games but ended up losing it was an eye opener for the program. The 76ers have a very young team but have the full capability of winning their conference this year. Right next to them would probably be the Millaukee Bucks, the Bucks still have Giannis Antetokounmpo the 2019 NBAs Most Valuable Player. After averaging 27.7 points per game last year The Greek Freak is expected to do even more this year. The Bucks also re-signed Kris Middleton, one of the best 3-point shooters in the league. The Eastern Conference will be a tough one this year and has much potential for the 2019-2020 season.

The Western Conference is even better, Teams like the Lakers, Clippers, and Timberwolves all have a great shot at winning the Western Conference. The Western Conference has been the premier conference for a couple years now. The Warriors have dominated, but now that Kevin Durant is gone and Klay Thompson is injured, Stephen Curry now has the load on his shoulders helped by D’Angelo Russel. LeBron and Anthony Davis are looking to bring back the “Lake-Show” and have a spectacular season, they have all the ability as long as the team stays healthy. Timberwolves are also in the talk this year with their extremely young team. Andrew Wiggins and Karl Anthony-Towns have created some of the best chemistry in the NBA, they believe this could help them bring their first Finals Championship back home to Minnesota.

The 2019-20 NBA season has been anticipated by many. With balance restored in the league, this season is expected to be one of the most historic and most competitive seasons since the 2000s.