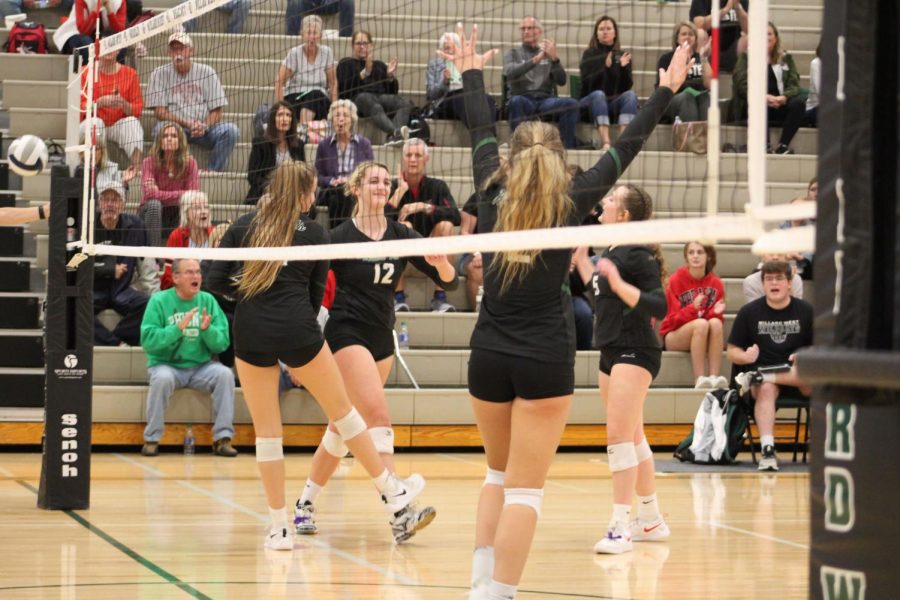 Senior Gabrielle Nordaker makes the kill for a Wildcat Win

After Monday’s game the team had a 15-6 record. Their season has been going strong with an overall kill rate of 34.1 and a hitting percentage of .198. Along with that they have 681 total kills and 216 total blocks. The Wildcats were ranked higher than the Titans pregame, but that didn’t change their performance.

Early in the second set, the Wildcats took the lead 4-1. After a great save by sophomore Sadie Millard and a powerful kill by Ella Hazen the Wildcat lead started to grow even more making the score 10-5. At this time the Titans decided to take a timeout, and it improved their play. Coming out of this timeout, the Titans scored three consecutive points making the score 9-12. Although the Wildcats gave up three points they fought back and got eight more consecutively. In the end of this set the Wildcats 25-18.

For the Wildcats, their leading outside hitter was junior Elise Gilroy. Gilroy had 11 serves, 10 digs, and only one digging error. Along with that she had eight receptions with an average of three receptions per set.

“We came in with a lot of energy and didn’t let Papio South take away our momentum,” Gilroy said. “We could improve on starting off strong, if we start off strong every game we wouldn’t have to make up ground later in the game.”

Nordaker was another player for the Wildcats and had a tremendous game. She had seven kills, 20 attack attempts and a hit percentage of .100. She had an average of 2.3 kills per set, and only 5 attack errors.

“We came into the game calm and ready to win,” Nordaker said. “We didn’t get stressed or flustered in tough points and were versatile knowing what shots to hit.

Although the Wildcats won the match there are always areas to improve. A big focus in their practices are to work on communication when things aren’t going there way.

“Communication is always key, sometimes when things are not going our way we can get quiet,” coach Joe Wessel said. “Papillion LaVista South is a great team with some amazing athletes. We prepared and stuck to the game plan and we were able to have some success as we continue to push towards our goal of making state for the 9th consecutive season.”

The Wildcats next match is against the Mustangs at Millard North High School on Tuesday, October 15th. The Mustangs are currently 15-7 coming off a big win against Bellevue West. This game will be a tough match for the Wildcats and one of the most evenly matched games of the year.