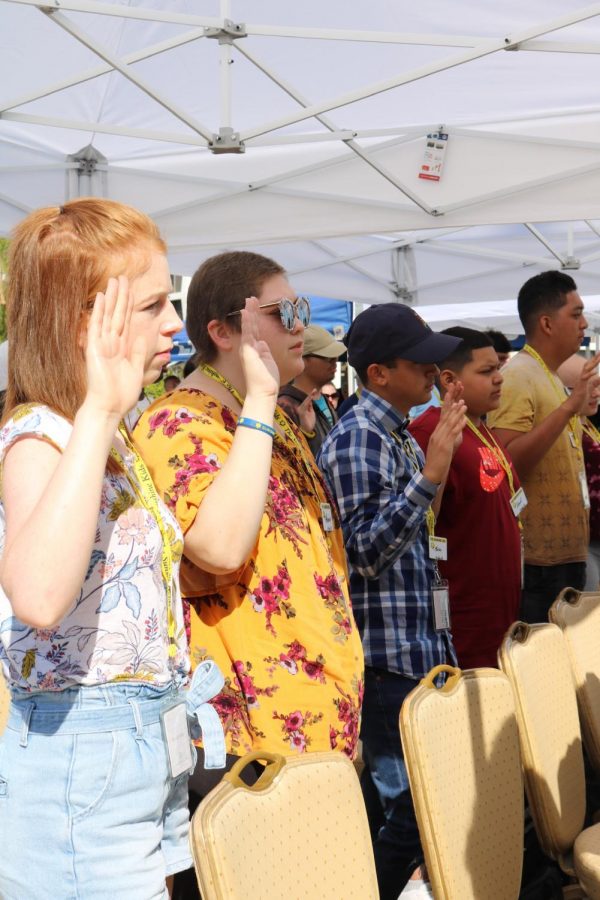 Emma Baker, Alex Stamer-Fuentes, Martin Plascencia, Daniel Leiva and Christhor Roy stand with their right hands raised as they are sworn in as junior members of the Los Angeles Police Department. After being inducted, we met the chief and our officer for the day. Then, we rode in the motorcade to Raleigh Studios. “The motorcade was super fun,” junior Alex Stamer-Fuentes said. “I felt some empowerment because they closed down Hollywood Boulevard for just the president and us, the Sunshine Kids.”

From Saturday, September 14th to Friday, September 20th, I took part in the ultimate California adventure. Teen cancer thrivers and survivors, from all over the country, came together for a Sunshine Kids trip. Founded in 1982, the Sunshine Kids (SSK) nonprofit organization is dedicated to providing group activities, such as national trips or local meet ups, for kids with cancer. Every smile they get is a win in their book.

And smile we would.

Having always wanted to go to California, there was no way I could say no to the invitation. At the airport, I met up with a medical representative and three other teens from Omaha Children’s Hospital. Little did we know that we, practically strangers, would be like family when the trip was through. When we landed in Los Angeles, I was smiling ear to ear from excitement and anticipation. SSK staff and volunteers greeted us with candy leis, and then we jumped into a bus to our hotel. In the activity room, the place where we would hang out and eat meals in, I got to meet the 22 other kids I’d be spending the week with. They came from places like Alaska, Maryland, Florida and Hawaii.

On day one, I woke up early and got ready to go to Griffith Park. On the bus ride there Police Academy actor and SSK Executive Director, G. W. Bailey, gave us the low down on the history of the park. Griffith wanted it to be a place filled with numerous free activities. I think he achieved that because there were so many things to do there, like golfing, hiking and picnicking. We got to visit the Griffith Observatory. Learning about the solar system and seeing how much we would weigh on different planets was cool – On Pluto, my entire group combined weighed only fifty pounds. But, to me, more intriguing than the science was the view. Not only could we gaze at the sprawling, skyscrapered cities, the Hollywood sign shined bright in the distance.

Being in the land of celebrities, it was only fitting that we would get hair and makeup done by professionals for our opening week party at Raleigh Studios. In the activity room, I got my makeup done by a makeup artist who tends to do special effects makeup for shows such as Grey’s Anatomy and The Walking Dead. My hair was perfect too, with braids, a little sparkle and rings. I was ready to jump on the bus and get to the party

When the bus turned the corner at Raleigh Studios,  a bunch of kids gasped so I knew something was up. The doors opened, and we were met with a huge crowd clapping, cheering and snapping pictures of us as we stepped onto the miniature red carpet. It was surreal. Once we made it through, we saw all the activities they had set up for us: Caricature artists were available to draw our faces on T-shirts, a spray paint artist was making custom hats, a green screen was out to make funny videos and a henna artist was making beautiful designs.

Just when I thought the party couldn’t get any better, a SSK volunteer asked if I watched Good Luck Charlie. I said yes and glanced over my shoulder to see Jason Dolley, aka P.J. – Everyone’s favorite Disney Channel brother. My new friend Alex and I stumbled our way over there. We introduced ourselves, got pictures and talked to him about what we were looking forward to that week.

“When I met the actors, I felt star struck, but they were all so easy to talk to after the excitement cooled down,” junior and Iowa native Alex Stamer-Fuentes said. “It’s like they’re your friends.”

The next day, we went to Madame Tussaud’s Wax Museum. I curtsied in front of Prince Harry and Meghan Markle, sported a peace sign with Snoop Dogg and twinned with Dorothy from the Wizard of Oz. We also got a behind the scenes tour with the museum’s artists. They showed us what they were working on. One example was a damaged wax head of The Rock which had been subject to a museum goer’s punch.

Afterwards, we headed down Hollywood Boulevard, snapping pictures of the star studded sidewalk. I read dozens of quotes and measured up my hand size to celebrities that had left their marks in the concrete before the TCL Chinese Theatre. Across the way was El Capitain Theatre, and further down the street rested the Dolby Theatre. As the home of the Academy Awards, the Dolby Theatre, which is usually a shopping mall, had a grand staircase up the center and the names of each year’s winning film along the walls. It was incredible to be somewhere that iconic.

The day was still young, so we headed to Warner Bros for a Studio Tour. We saw set pieces from many shows and films. These included the Friends Central Perk couch, the Pretty Little Liars church, Sheldon’s living room from The Big Bang Theory and the costumes from Wonderwoman and Harry Potter. The sitcom Mom was even open to the tour, allowing us to learn how production catches the live audience’s laughter.

We learned that many of the houses on the lots had multiple doors, no ceilings and no second floors – Many were just facades. As we were leaving a street of those set houses and offices, I looked over and saw none other than John Stamos on the phone. Everyone, including the tour guide, freaked out a little bit.

The following day the Sunshine Kids got their first adrenaline fix. We started at Disney’s California Adventure Park. My inner kid jumped out when we came across Carsland. It was exactly how I’d imagined it if the movie came to life. Strolling down the street I passed the Cozy Cone Motel and Flo’s V8 Cafe. The Radiator Springs Racers roller coaster was a blast and yes, our car won the race.

We also rode the Incredicoaster. At speeds of 55 miles per hour, the coaster zoomed on over a mile of  track. Much to the dismay of my med rep and friend Alex, many rides were fast. My med rep missed the memo on the Incredicoaster’s huge loop de loop, so she got stuck riding it. Turns out, she had a blast. But on the Guardian’s of the Galaxy ride, she hung back because its 130 foot drop was very noticeable. I was a little bit nervous myself, but I ended up loving it.

After some shopping at Downtown Disney that night, we headed back into Disneyland for the Mainstreet Electrical Parade. Tons of twinkling LED lights wove around massive floats carrying characters like Cinderella and Alice. And the best part? We had front row, reserved seating so we could be up close and comfortable.

On Wednesday, the day started with a rooftop ceremony. As we took our seats, members of the Los Angeles Police Department were gathered on the roof with us to listen to the chief’s speech, We were inducted as honorary Junior Police for the day, and then got paired up with a member of the department. Officer John Bravakis and myself rode in a cruiser as part of the motorcade to Raleigh Studios. He talked about his 36 years in the field, the strategics of motorcades (the Sunshine Kids were the “package”) and what’s around Hollywood. We both got a kick out of the fact we were playing the ultimate trick: President Trump was in town at the same time. Some of the hundreds of people that lined the streets filming must have thought it was the President in the huge motorcade and the cause of the road closures.

Upon arrival at Raleigh Studios, we said our goodbyes to our partners and headed inside. While we were eating lunch and rummaging through our Netflix goody bags, a SSK volunteer made an announcement that someone special had stopped by. I couldn’t believe my eyes when I saw Melissa Rauch, otherwise known as Bernadette, from The Big Bang Theory right next to him. Immediately, everyone was up wanting to chat and grab a picture with her.  Throughout the trip, we noticed the group from Hawaii had their shaka hand sign they would do in every picture, so us Nebraskans knew we had to represent as well. With some credit to Melissa, we decided to shuck some corn for our picture’s pose, garnering plenty of laughs.

For the rest of the day, we were at Paradise Cove Beach in Malibu. The soft, tan sand sloped into the cool blue water. The waves were like  nothing I had ever seen: Giant and merciless, able to take you down in an instant. But those waves were perfect for my first foray into boogie boarding.  With the help of a SSK staff member, I was able to catch a couple and had a good time.

The final day was spent at Universal Studios. We first went on the studio tour which was like a ride in itself because of all the special effects and 3D images. The Simpsons, Jurassic Park and Harry Potter rides were fun but two really stuck out to me. Number one was Revenge of the Mummy – It had thrilling speed and went backwards! Number two was the 3D Transformers Ride because it felt like I was in the fight alongside huge robots from all the crazy motions and 3D effects.

That night, the hotel hosted our closing party. We danced the night away and snapped pictures at the photo booth. I even got to hold a real Academy Award (for 2003’s Two Soldiers) and hung out with Jason Dolley, yet again.

It is trips like these that I am reminded how grateful I am to so many people. Of course, I’m forever grateful to the Sunshine Kids organization, staff, volunteers, kids and celebrities I met. Those memories fill me with more joy than I have ever known. But I am also grateful to the people that got me there. The people that supported me through cancer in order to be in the right place to go on the trip. I know all Sunshine Kids would agree. So, even though September, Childhood Cancer Awareness Month, has wrapped up, I encourage you to keep the thoughts of young cancer warriors in your head, no matter the month. With thoughts, well wishes and opportunities, like a Sunshine Kids trip, we grow stronger everyday. 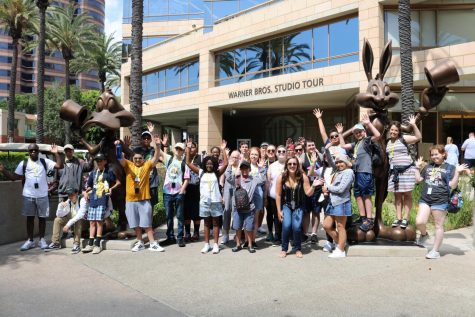